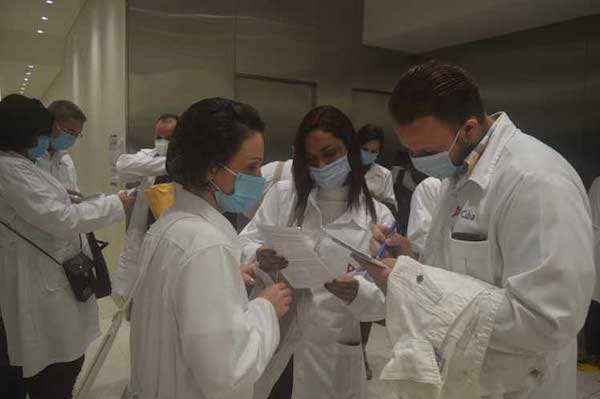 The dozen of Cuban medical brigades recently arrived in Panama will be deployed to the places assigned to fight COVID-19.

Following the arrival of the medical personnel last Thursday, they received information on the protocols and treatments established by the authorities in relation to patients, in addition to visiting the work areas and exchanging experiences with their counterparts in the healthcare centers, the Ministry of Health of Panama (MINSA) reported.

According to an official statement delivered to the press, Carlos Perez, head of the Cuban team and a first-degree specialist in internal medicine, stated during the initial training meeting that they were summoned and prepared to help overcome the difficult times the country is facing.

Perez explained that the body of specialists he heads is made up of intensivists, cardiologists, pulmonologists and internists, many of whom have fought the SARS-CoV-2 virus, in 40 countries in America, Europe and Africa, in addition, part of the group worked on the Ebola epidemic in West Africa in 2014.

The arrival of 219 Cuban specialists will allow an increase in admissions as of this Monday, as experts assured the press that many of the patients isolated in their homes worsen their symptoms, arrive at hospitals in a very deteriorated state and half of them die in the first phase of the treatment in intensive care.

This reinforcement of personnel, accompanied by strict additional measures of confinement in at least the capital and the neighboring province of Western Panama, the health authorities hope to contain the rapid spread of contagion and start a process of disease control until the arrival of a vaccine against COVID-19.