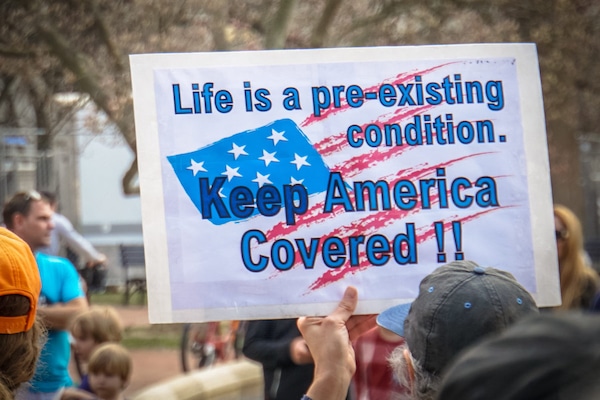 While it is not clear how many people have lost their lives to COVID-19 in the United States (is it under 400,000 still? Over 500,000 yet?), it is clearer than ever that we are experiencing a continent-wide public health catastrophe. Perhaps this is unsurprising. After all, the United States has a health care system designed not for the public good, but for private profit. A fundamental conflict of interests, the generation of profits, by law, prevails over the provision of care, and has resulted in fewer hospital beds over the years, lack of basic equipment, chronic understaffing, and other deprivations of care. All of these cuts to public health account for why the pandemic has devastated the United States while killing few people in places with robust public health infrastructures, such as South Korea.

But it is not simply the case that our public health crisis (which includes heart disease, obesity, cancer, and sleep deprivation epidemics, among others) results from an austerity-based neoliberal political-economic model; our political economy itself constitutes a vast public health crisis.

From a critical public health perspective, the pandemic crisis, the economic crisis, and the political crisis—of which mass incarceration and systemic police brutality are only among the more visible afflictions—and the ecological crisis all ultimately comprise one fourfold public health mega-crisis.

Relevantly, the concept of the crisis has its roots in medicine. For Hippocrates and Galen, and well into modern times, a crisis referred to a moment in the development of a disease when a physician could intervene, stop the disease’s progress, and heal the patient.

And, as Galen certainly knew, Asclepius, the archetypal healer of the ancient world (the son of a god who could raise the dead, restore sight to the blind, and was killed for transgressing the order of the day),  had a daughter named Hygieia. Known to the Romans as Salus, this name for the offspring of Asclepius (a mythical healer herself) manifests in the ancient maxim salus populi suprema lex esto—the health of the people should be the supreme law.

More than just the state motto of Missouri, the maxim is fundamental to society’s political, moral, and legal thought. Predating not only the Bill of Rights but the Magna Carta by centuries, it has been cited by politicians and thinkers from Cicero to John Locke to Franklin D. Roosevelt, and just recently by Boris Johnson. But more than a fancy-sounding ancient Latin trope, the maxim possesses legal power. Indeed, as a constitutional metanorm, it has been employed by courts in the United States and elsewhere on thousands of occasions as grounds to both nullify and create law.

As such, we might wonder why, in the midst of our catastrophic fourfold mega-crisis, this maxim linking people’s health to not just law but supreme law is not receiving greater attention.

As Dame Mary Beard, the Cambridge University professor of classics, pointed out when commenting on Johnson’s glib use of the phrase a few months ago, the maxim was used during the Roman Empire to pursue what she compared to national security, as opposed to anything resembling social security. However, what she did not mention is that, modernly, the maxim has been used for centuries to justify democratic, egalitarian politics. From rejecting the pauperizing Enclosure Acts and supporting Parliament against the Crown during the English Civil War in the mid–seventeenth century, to justifying independence from the British Empire in Britain’s North American colonies in the eighteenth century (and, arguably, manifesting later in the general welfare clauses of the U.S. Constitution), to pursuing basic public health policies in the United States in the nineteenth and twentieth centuries, the maxim has been central, rhetorically as well as legally.1

Though examples from our deeply troubled past are no doubt problematic, a consideration of the maxim’s history contains much of relevance to today’s crises. During the late eighteenth century, for instance, South Carolina courts used the maxim to justify canceling people’s war debts. The health of the people should be the supreme law, they argued, freeing debtors from health-sapping burdens—an important precedent that should be invoked today in support of canceling student loan debt, consumer debt, and other obstacles to people’s economic, psychological, and physical health. And throughout the nineteenth century and beyond, the maxim was used repeatedly to shut down industries such as tanneries and slaughterhouses that harmed the environment and threatened public health. Where such enterprises (generally limited then to the sphere of nascent industry, with the deeper diseases of imperialism, patriarchy, and slavery overlooked) conflicted with public health, the latter prevailed every time over private property rights. And because the police power was used to protect public health, and not eminent domain, monetary compensation (just or otherwise) was not even required. In other words, the maxim could be used today to ban the fossil fuel industry outright, among other ecocidal operations. More than a moral argument, this is a practical, legal one. But more than merely negating ecocidal institutions, among others that harm human and ecological health, the maxim can be used to justify positive rights to the material conditions of health. More than simply Walter Benjamin’s emergency brake, which halts the ecocidal storm of progress, allowing the angel of history to close its wings and land; the maxim enables the angel of history to do what it desires but was hitherto thwarted from: making whole what has been destroyed, that is, healing the world.

While defining health remains something of a minefield of normative problems, there are nevertheless certain basic conditions of health that apply universally and about which no reasonable person can disagree. For instance, everyone (all people the world over, not just white people or rich men) at minimum requires clean water, nutritious food, safe housing, health care, and a clean environment—free from police violence and other forms of institutional violence, as well as from unnecessary stress—to be healthy. Crucially, if the public’s health is the supreme law, as the maxim asserts, then it is also the case that the lack of these basic conditions poses not only an impediment to public health but constitutes a violation of the supreme law. Unhealthy conditions, then, give rise to a duty to correct conditions of disease and create conditions of health (in a manner congruent with the health of the greater environment). Housing, nutritious food, clean water, a clean environment, and so on, must be established to comply with the supreme law.

Moreover, it is important to stress that these conditions must not be produced for profit (as a means to something else) but as ends in themselves, for the sake of health. According to this reading of the maxim, this is a society’s job. It has a duty of care to fulfill this function. Rather than pursuing endless economic growth, pumping billions into the military, spreading war, pollution, and disease across the globe in the extraction of profits, the maxim calls on us to invest our vast resources into creating conditions of health.

A politics that embraces this reading of the maxim (that the health of the people, all people, should be the supreme law) would not have all the answers to our spiraling fourfold public health mega-crisis. However, it does not take keen vision to see that healing society requires more than simply eradicating a virus. Beyond masks, testing, contact tracing, vaccines, and other immediate interventions, a sincere commitment to public health requires, at a minimum, universal health care—the norm in much of the so-called developed world. It also requires ridding society of the political-economic conditions that produce these pandemics, not to mention our accelerating ecological catastrophe, in the first place.

As it concerns health in anything beyond an instrumental sense (Martin Heidegger defined the Nazis’ concept of health as the capacity to act for the state), not only must the provision of health care be decoupled from jobs, but to develop a healthy society, housing, food, water, and other conditions of health must be decoupled from the profit-making sphere too. One need not have expertise in the history of swill milk or business practices such as planned obsolescence to recognize that there is a fundamental conflict of interest between profit making and providing care, and a system designed to extract profits from the latter will always, as a matter of law, be forced to reduce care to this function. But this is just one instance of a general dynamic of privatization and austerity (and imperialism); one we have witnessed over the past few decades as the public realm is subordinated to the private, and ultimately neglected or privatized into nonexistence. In order to resolve this conflict of interests, then, and to comply with the maxim, the conditions of health, not to mention the general ecological sphere, must be removed from the economic sphere. These conditions must be pursued for the sake of health, as an end in themselves; as a right, not for profit.

Where water is unhealthy, as in Flint, Michigan, or is threatened by oil pipelines as in Standing Rock, among many other places; where the air is carcinogenic, as it is throughout the world, the supreme law is being violated, according to this interpretation of the ancient maxim. Where police and other institutions destroy public health, they must be defunded, and replaced with concrete conditions of health—with ease, as opposed to disease.

None of this should be construed as merely a moral argument. As mentioned before, on a practical level it is a legal one, too. The health of the people, the public health, should be the supreme law. Fidelity to the ideals of democracy, not to mention basic notions of justice, neighborhood, and human decency, demands that the considerable resources at this society’s disposal ought to be put to creating an entirely new social life, one characterized not by the rampant conditions of disease destroying us all, but by conditions of health, beyond capitalism and the nation-state—not for profit, but for its own sake.

Elliot Sperber is a writer, lawyer, and critical geographer. Exploring the historical and conceptual construction of spaces of in/justice, his work has appeared in Capitalism, Nature, Socialism, Roar Magazine, University of Bologna Law Review, and other publications. He lives in New York with his wife and daughter.