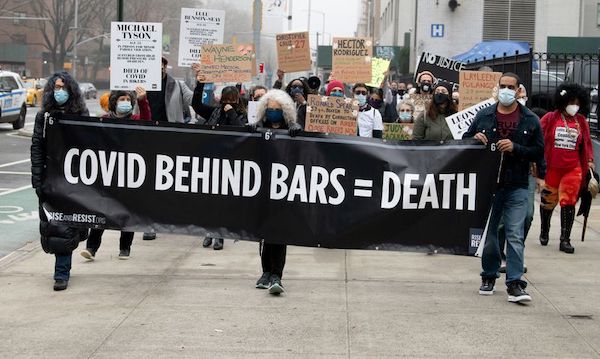 COVID-19 is now raging uncontrolled throughout the United States. New variants that are more easily transmitted have entered the country from the U.K., Brazil and South Africa. Vaccine is scarce.

We have known from the beginning of the pandemic that social distancing and duration of contact are key factors in spreading COVID infections. Predictably, prisons have proven to be sites of rapid spread. Incarcerated persons and staff are in constant contact 24 hours a day, and distancing is virtually impossible. Nationwide, the infection rates in prisons are at least four times higher than in the general population, and death rates double.

In New York State, as of Jan. 28, a total of 9,119 incarcerated persons and staff had tested positive for COVID-19, and 37 had died, many quite recently. The real numbers are certainly worse, as testing rates for the entire past year have been well under two tests per incarcerated person. This is completely inadequate to show the extent of COVID in New York prisons or to control its spread from person to person.

Cornell University, where I work, has been testing at a rate of two tests per student per week and is going up to three times a week for some groups in the face of new and more transmissible strains. Even at the rate of testing in prisons, though, about 16% of tests have been positive, many times the rate in the general population of the state. Moreover, communications from prisoners suggest that precautionary policies are poorly observed by prison staff in many facilities.

The Prison Policy Initiative, an independent research group dedicated to ending mass incarceration, has concluded that failure to reduce the incarcerated population in the U.S. led directly to the increase in COVID not only inside prisons but also in the communities that surround them. They report that in New York, 38,915 additional cases were linked to mass incarceration between May 1 and Aug. 1 of 2020, amounting to almost 200 net additional cases per 100,000 population. Outbreaks at an assisted living facility and an elementary school were directly linked to an outbreak at Greene Correctional Facility.

The Centers for Disease Control recommends that everyone living and working in correctional facilities be vaccinated simultaneously. Many states have prioritized incarcerated populations in their COVID vaccination plans. But New York has not done so. In fact, incarcerated persons aren’t even mentioned as a target group in any of the phases of the New York State vaccination plan.

As anyone who has tried to get an appointment to be vaccinated knows, the vaccines that exist are in very scarce supply. It is extremely difficult to get vaccinated right now in New York State even if you are in a group listed in Phase 1b, which includes persons 65 and older because of their higher risks from COVID.

Given the scarcity of vaccine and the spread of new strains of the virus, there is only one way to protect incarcerated persons in this age group: to release all of them who do not pose a danger to the community.

Most of them do not. Not only do people “age out” of crime, but many of those in this population are in prison as a result of cruelly long sentences imposed long ago. They should not face a de facto death sentence in addition.

Gov. Cuomo issued clemencies last year in June as well as December and recently promised that he will issue clemencies on a rolling basis, rather than just at the end of the year. Now is the time to do so. Releasing (with appropriate quarantine) those who are incarcerated who are 65 and older, who have served long terms, and who pose no danger to the community will protect not only them but also prison staff and the counties in which prisons are located.

Reducing the population density in New York prisons would also help to protect other persons still incarcerated. An immediate and greatly increased exercise of the governor’s clemency power to release this group is a vital part of any sensible strategy to control this deadly disease for all New Yorkers. Moving to do so now is critical to protecting us all.