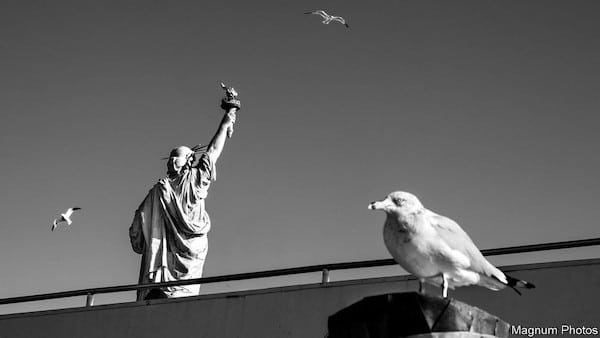 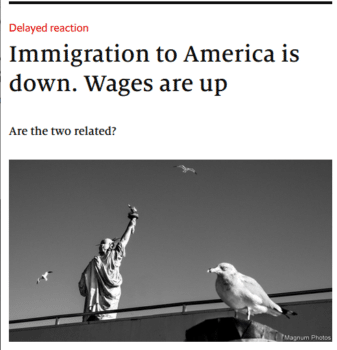 The Economist (2/15/20) ran a brief article last year with a startling headline: “Immigration to America Is Down. Wages Are Up. Are the Two Related?” Maybe, the article’s anonymous author answered, at least for the short term.

A few on the right were quick to cite this conclusion as support for former President Trump’s efforts to deter immigration. “Amazing how that works,” Donald Trump, Jr., tweeted. “Thanks @realDonaldTrump.” Breitbart’s Neil Munro (2/19/20) used the article to claim that immigration restrictions were “driving up blue-collar wages, and those extra wages are stabilizing the U.S. economy.”

The Economist article didn’t get much public attention beyond these references. But we can expect more claims of the sort as conservative politicians and media react to Biden administration moves to address wage disparity and to reverse some of Trump’s xenophobic policies. A preview came on February 16, when Utah Sen. Mitt Romney tweeted that he and a fellow Republican, Arkansas Sen. Tom Cotton, were introducing legislation to raise the federal minimum wage—but only in exchange for further restrictions on undocumented immigrants seeking jobs.

The Economist’s argument is based on a pay increase that low-wage workers received during the Trump years. Nominal wages for U.S. workers without a high school diploma jumped by nearly 10% in 2019, according to the article, while most workers have only received an increase of 2–3% in recent years. 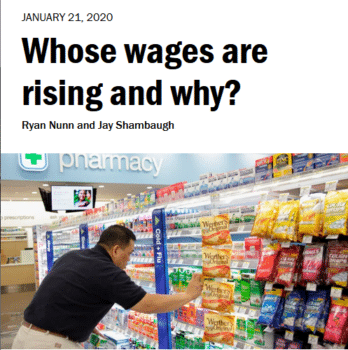 Brookings (1/21/20): “One reason that workers at the bottom are doing relatively better recently is the recent increases in many state and local minimum wages.”

Why would low-wage workers be getting a disproportionate boost? The obvious answer is that state and local governments have been raising their minimum wage requirements over the past few years. The Brookings Institute finds that low-paid workers in states with sizeable minimum wage increases have seen their real pay rise three times as much as similar workers in states that failed to raise the minimum. (Brookings cites tightening job markets in those states as an additional reason for the increase.)

The Economist admits that minimum wage hikes may be one of “many factors” for wage increases, but it focuses on a different explanation. Net immigration to the United States (the number of immigrants entering minus the number leaving) fell to 595,000 in 2019, the lowest number for the decade. So slower growth in the immigrant population could have cut down the number of low-wage immigrants competing for jobs with low-wage U.S.-born workers, and this would then drive up wages for the latter group.

There’s a big problem with this argument, however: the lack of any evidence that Trump’s policy changes significantly reduced the number of low-wage immigrant workers.

…when immigration goes down?

The official U.S. immigration system, meanwhile, favors wealthier, better-educated applicants; nearly half of the foreign-born authorized to enter the United States over the last decade have a college degree, a higher rate than the U.S.-born population.

These better-paid authorized immigrants seem to have been the ones most impacted by Trump’s immigration policies (Documented, 11/3/20). A large part of the reduction in recent immigration results from the former administration’s assault on legal channels for entering the country and acquiring lawful residence: the “Muslim ban,” the drastic reduction of refugee resettlement, the de facto dismantling of the asylum system, and the new bureaucratic hurdles in the visa application process.

In contrast, Trump did less to lower the number of undocumented workers. As the Migration Policy Institute has noted, “The Trump administration deported less than half as many unauthorized immigrants during its first three fiscal years than did the Obama administration during the same timeframe.” The undocumented population may even have risen slightly from 2017 to 2018.

In any case, the Economist’s argument depends on a supposed correlation between the number of low-wage immigrants and the pay of low-wage U.S.-born workers. But most of recent history doesn’t show any such correlation. The Pew Research Center (8/20/20) reports that unauthorized immigration soared in the late 1990s, from 5.7 million to 8.6 million, while the period from 2010 to 2014 brought a small decline. 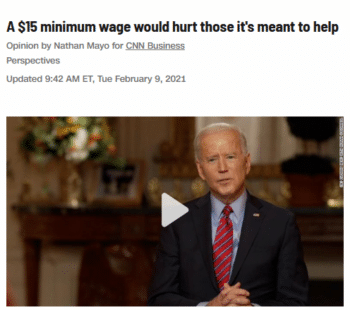 Did low-wage workers lose out in the first period and make gains in the second? Not at all. According to a study by the Economic Policy Institute, wages for the bottom 10th percentile of U.S. workers rose in the late 1990s, and fell during the years from 2010 to 2014.

It’s not really surprising that the Economist chose to focus on immigration policy rather than minimum wage regulations as an explanation for pay increases. Corporate media tend to be critical of calls to lift the wage floor, often citing exaggerated claims about unemployment and dire but unfounded warnings about the destruction of restaurants and other small businesses. “A $15 Minimum Wage Would Hurt Those It’s Meant to Help,” an opinion piece on CNN Business (2/9/21) advises.

What’s even worse, for both Trump backers and corporate publicists, is the way the wage increases were won: through campaigns by the low-wage workers themselves (New York, 12/1/18). Groups like Fight For 15 organized, marched and walked out—often with strong participation by immigrant workers (The Nation, 5/1/17)—to push state legislatures and city councils into doing the right thing. These efforts are continuing: a number of fast-food workers held strikes on February 16 to demand a $15 federal minimum wage (Guardian, 2/16/21).

For years, the media narrative has been that repressive immigration policies—billions spent on immigration enforcement, families torn apart, thousands dying on the southwestern border—will somehow lead to wage hikes. They haven’t, and they won’t. What really works is organization and class struggle.