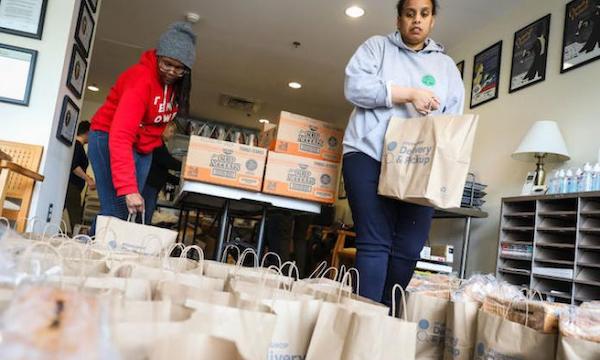 Volunteers packing food for people affected by the pandemic

Of all the reasons to be angry during the pandemic—the profit-first response of governments, the neglected state of the health system, the environmental crisis underpinning the disaster, the millions dead—it has been people buying extra toilet paper that has elicited the most outrage. A couple of unseemly incidents in supermarket aisles and bang!: an avalanche of look-how-terrible-people-are vitriol.

Lots of us accept this and tut-tut along because such sensationalism reinforces the prevailing wisdom about human nature: that we are all indelibly greedy, selfish and mean spirited, with only the threat of jail standing between us and our worst instincts. At the same time, most of us don’t really believe this applies to ourselves or to our family or friends—which should, if you think about it, set off some alarm bells about the reliability of the theory.

What this view of human nature does provide insight into, then, is not so much ourselves, but society. It naturalises and universalises values and behaviour consistent with the economic logic of modern capitalism. Karl Marx and Friedrich Engels were onto this more than 170 years ago, when they wrote in The Communist Manifesto that the bourgeoisie “transform into eternal laws of nature and of reason, the social forms springing from their present mode of production and form of property”.

Today, this translates as greed and selfishness being considered universal traits that have their origins in biology. Stemming from this, social arrangements based on hierarchy and competition are presented as the natural order or things. This view of human nature didn’t make much sense in feudal society—the lot of the peasant or feudal lord was decided by God, whose plan, for whatever reason, involved the shameless appropriation of the peasants’ produce by the feudal lord. The inclinations of individuals didn’t really factor into the equation, outside of the imperative to serve God and his middle managers.

Capitalism is different in that we are all supposed to be free and equal— there is no external power putatively responsible for unfairness or inequality. Rationality and science supposedly inform the highly technical productive process of industrial capitalism, largely displacing God’s will and the vicissitudes of the natural world.

But how, then, to explain why, in a society of liberté, égalité, fraternité, some people enjoy obscene wealth and privilege while others struggle to survive on a minimum wage? Or why we are knowingly destroying the planet on which we depend for our existence when we are supposedly so rational? The easy explanation, as far as the system’s apologists are concerned, is: human nature.

So that this doesn’t come across as a reheated version of the Christian original sin proposition, science is corralled into the theory’s defence. It is our DNA’s imperative to reproduce itself that supposedly makes us selfish, willing to trample over others to get ahead and, presumably, to desire more than our fair share of toilet paper in times of uncertainty.

We are not supposed to notice that, for most of human history, our DNA has gotten along just fine without nuclear weapons, jails or oil refineries. In fact, for many thousands of years, humans survived by cooperating to gather and hunt food and produce other necessities, a mode of production which required a complex social code that necessarily put a premium on egalitarianism, cooperation and humility. Such an arrangement allowed our DNA to propagate itself for a lot longer—nearly 200,000 years—than capitalism looks like it’s going to.

We’re also not supposed to ask why the dog-eat-dog view of human nature just happens to coincide with the go-getterism characteristics of celebrated entrepreneurs or the business “acumen” of successful CEOs. We’re just meant to assume that somehow, the values that define success in the competitive, accumulation-oriented world of the capitalist class—pitted against each other as they are in a desperate race to extract as much wealth from the planet’s resources and people as they can at the lowest possible cost—managed to pervade the whole species.

Conveniently, projecting the values our rulers live by onto the rest of us creates a sense of collective responsibility and shame for their destructive, anti-human consequences, when in fact the values that actually serve the interests of most people are quite different.

Individuals without capital or other means of exerting control—i.e., the great mass of working-class people—have few means to improve their lot on their own. Their interests are best advanced by uniting and using the collective power they have as the producers of society’s wealth to demand concessions from those who control it.

This explains why trade unions continue to be the largest voluntary organisations in most countries where they are legal: they express a degree of consciousness on the part of workers about the need for solidarity and collective action—not selfishness and pushing others down—to improve their material circumstances.

The slogans of the working-class movement reflect this: “Unity is strength”, “Touch one, touch all” and “Workers, united, will never be defeated”. Empathy, mutual respect and consciousness of a common purpose are thus touchstones of well-organised and class-conscious industries and workplaces.

But workers are also inculcated from birth with habits of deference towards their bosses and resigned acceptance of a society over which they have little control.

There are competing pressures—toward accepting and trying to survive in a competitive, individualistic capitalist reality, and toward the cooperation, empathy and collective consciousness that are an important part of most people’s working lives.

At times of greater politicisation, though, when workers begin to use their power not just to wrest concessions from their employers but also to challenge the wider structure and organisation of a society that oppresses them, it’s a different story. Marx described this process in The German Ideology in 1846:

“For the success of [socialism], the alteration of men on a mass scale is necessary, an alteration which can only take place in a practical movement, a revolution; this revolution is necessary, therefore, not only because the ruling class cannot be overthrown in any other way, but also because the class overthrowing it can only in a revolution succeed in ridding itself of all the muck of ages and become fitted to found society anew.”

In other words, the process of workers fighting to assert control over their lives requires them to change—to do away with the divisions which formed a block to unity, the prejudices inculcated by an unequal society and the passivity born of powerlessness.

The dramatic ways in which people change, and the prevailing view of human nature that changes with it, are evident at times of heightened class struggle and revolution. During the 2011 uprisings commonly referred to as the Arab Spring, for instance, people in Egypt’s Tahrir Square collectively organised medical assistance and cleaning, as well as groups to protect persecuted religious minorities from being attacked by thugs and the state. The only incentive for any of this was to protect, strengthen and build the movement to bring down the hated Mubarak regime. To do that, people had to cooperate and support each other, not take advantage of others or manoeuvre to get ahead as individuals.

Human beings therefore are not good or bad in any absolute sense. We are complex beings with the capacity for both selfishness and generosity, kindness and cruelty and so on. The sort of society we live in makes a huge difference to how this potential is expressed. “The human essence is no abstraction inherent in each single individual”, Marx wrote. “In its reality it is the ensemble of social relations.”

The power of the capitalist class is manifest partly through the way in which its values are structured into our lives and normalised. We are compelled to compete against others to gain qualifications, employment or housing, which makes competition seem natural and unavoidable. Endless surveillance and supervision reinforce the idea that people can’t be trusted to do the right thing. And the absence of adequate social provisions makes our survival largely dependent on our individual resources.

In a society democratically controlled by the direct producers, in which a sense of ownership and an understanding of each individual’s role in the wider social fabric motivated work rather than physical or economic compulsion, and in which people weren’t oppressed and pitted against each other, we would all be very different.

What is consistent over the course of history is that humans are a social species that depend for our individual survival on the actions of many others. Just think of any modern hospital, or the work that goes into producing the many objects and services we rely on each day.

Indeed, the ability to plan and execute our labour collectively is the quality that Engels, writing in 1876, argued was at the centre of human development: “[Labour] is the prime basic condition for all human existence, and this to such an extent that, in a sense, we have to say that labour created man himself”.

Under capitalism, our labour is controlled by a minority who use it to generate profit. This is not simply unfair; it is an affront to our humanity. The struggle for socialism is about reclaiming our humanity, and in so doing changing the condition in which our collective nature is expressed.