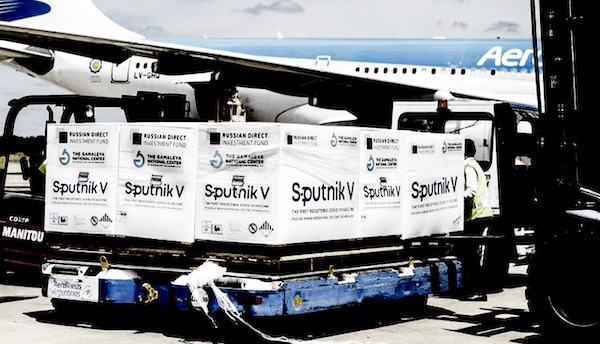 As Brazil’s death toll from the COVID-19 pandemic nears 275,000, documents reveal that Washington pressured the Brazilian government not to buy Russia’s “malign” Sputnik V vaccine–a decision which may have costed many thousands of lives.

The U.S. Department of Health and Human Services recently published its Annual Report for 2020.

“There is an end to the pandemic in sight”, he continues,

with the delivery of safe and effective vaccines through Operation Warp Speed.

Tucked away on page 48, the report shockingly reveals how the U.S. pressured Brazil to reject Russia’s Sputnik V vaccine.

Under the subheading “Combatting malign influences in the Americas”, the report announces:

OGA used diplomatic relations in the Americas region to mitigate efforts by states, including Cuba, Venezuela, and Russia, who are working to increase their influence in the region to the detriment of U.S. safety and security. OGA coordinated with other U.S. government agencies to strengthen diplomatic ties and offer technical and humanitarian assistance to dissuade countries in the region from accepting aid from these ill intentioned states. Examples include using OGA’s Health Attaché office to persuade Brazil to reject the Russian COVID-19 vaccine, and offering CDC technical assistance in lieu of Panama accepting an offer of Cuban doctors. [emphasis added]

It is also striking that the U.S. dissuaded Panama from accepting Cuban doctors, who have been on the global front line against the pandemic, working in over 40 countries.

As well as Brazil, the U.S. has despatched Health Attachés to China, India, Mexico and South Africa, likely charged with carrying out similar activities.

Brazil has suffered the world’s second-worst number of COVID-19 death rates, with Bolsonaro’s COVID-19 policy being described as “homicidally negligent”.

Throughout 2020, the Brazilian government consistently refused to pursue any vaccine but AstraZeneca’s, baffling medical experts.

His leadership did not believe in vaccination as a way out of the crisis and did not carry out the necessary planning for the acquisition of vaccines.

With deaths soaring, Bolsonaro eventually and belatedly opened discussions for the delivery of Sputnik V vaccines.

Secret documents published by Brasil Wire also revealed that the UK had lobbied Brazil on behalf of AstraZeneca as well as British mining firms, showing that the U.S. is not the only country leveraging power on behalf of pharmaceutical multinationals in Latin America.

This is only the latest scandalous episode in Bolsonaro’s handling of the pandemic, and malign U.S. interference in the region.