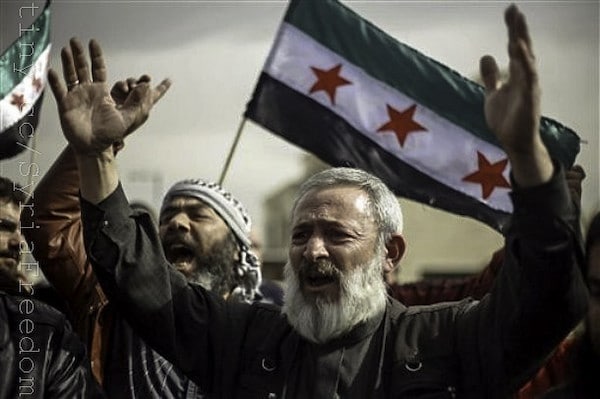 On this exact day ten years ago, NATO, the Gulf Cooperation Council, Turkey and Israel began a coordinated campaign of regime change against President Bashar al-Assad and the destruction of Syria. This has led to the death of over 500,000 people, millions of refugees, destroyed infrastructure and an economy in crisis. Despite numerous political maneuvers, this alliance against Syria catastrophically failed and could not achieve regime change. Not only did Assad survive the onslaught, but the geopolitical situation dramatically changed as a result.

Each aggressor had its own ambitions in Syria but was united in the goal to achieve regime change. Thanks to the contributions made by Russia, Iran and Hezbollah, the Syrian government survived the coordinated aggression. Whilst NATO and Turkey continue to insist on regime change, Arab states, most prominently Saudi Arabia and the United Arab Emirates, were forced to normalize their relations with Syria to counter the growing threat of Turkish expansionism and influence into the Arab World that they had not anticipated when they decided to destroy Syria ten years ago.

Although a U.S.-dominated unipolar system was consolidated with the collapse of the Soviet Union in 1991, Russia’s 2008 intervention to defend the de facto republics of South Ossetia and Abkhazia against NATO-encouraged Georgian forces was the first sign of an emerging multipolar system. A multipolar system, where there is a more equal distribution of power compacted into spheres of influence, was strengthened whilst the U.S. could only helplessly watch as Russia successfully defended South Ossetia and Abkhazia in a region that falls under Moscow’s sphere of influence.

It was Russia’s direct military intervention in Syria, which began on September 30, 2015 that truly consolidated 21st Century Multipolarity. As the U.S. had Pentagon-funded jihadists battling CIA-funded jihadists, Moscow had clear goals and policies towards Syria–the survival of the state and government. Not only did Russia successfully defend the government, despite the fact that large areas of Syria remain occupied by U.S. and Turkish-backed forces, it put its military footprint by assuming control of the Khmeimim Airbase and extended its lease over Tartous Port. In this way, Russia ensures that regime change is not possible in Syria, rendering the American and Turkish occupation of large areas of northern and eastern Syria as extremely cynical policies that prolong the suffering and economic catastrophe in the country.

Prior to the war, Damascus and Ankara had amicable relations, with Turkish President Recep Tayyip Erdoğan even once describing Assad as “my brother.” However, the so-called Arab Spring provided Erdoğan with the opportunity to pursue his neo-Ottoman policy. Not only has this resulted in large areas of northern Syria being illegally occupied by Turkey, but an intense Turkification process is underway with the Turkish school curriculum, currency and language being imposed on the local population.

What Turkey had not anticipated in Syria though was the re-emergence of the Kurdistan Workers Party (PKK) under the guise of the People’s Protection Units (YPG). In fact, before the war, Syria, which once supported the PKK, expelled the group and ended its support for it to improve its relations with Turkey. By Ankara supporting the collapse of the Syrian state, it allowed the conditions for the PKK to return to Syria and once again find a new base of operations to continue its insurgency against Turkey. In addition, Turkey wrongly believed that regime change would be a quick endeavor, and the prolonged war saw millions of refugees flood into the country, not only putting a major strain on the economy, but also a rapid increase in terrorist attacks across the country.

Israel is the only aggressor country that has not suffered due to regime change attempts against Syria. Israel’s main interest is not necessarily the removal of Assad from power, but the complete destruction of the country. The continuation of the war serves Israel’s interests as Syria was the only Arab state that posed an existential threat to the Jewish State. The destruction of the economy and weakening of the military has ensured that Syria will not pose a threat to Israel for several decades as it will have a long path towards recovery.

Ten years on since the beginning of the Syrian War, U.S.-led NATO, Turkey and participating Arab States failed to achieve their goal of regime change to implant their own puppets in Damascus. The U.S. failed to sever the Axis of Resistance (Iran-Syria-Hezbollah), the Arabs failed to install a Sunni president that would be against Iran and completely aligned with Saudi Arabia and the United Arab Emirates, and Turkey not only failed to install a neo-Ottomanist into power, but also reinvigorated the PKK that had not existed for years in Syria.

More importantly, the initial coalition against Syria has collapsed, with Turkey frustrated over the U.S.’ sustained support for the YPG and the Arabs pivoting back to Syria as they now find greater concern over Turkey’s support for the Muslim Brotherhood and interference in Arab affairs. In fact, the U.S. finds itself in a weaker position in the region as the Axis of Resistance is preserved and Russia now has greater military presence and influence in Syria that it did not have prior to the war. Russia’s success in preserving the Syrian state is the strongest indicator that the unipolar world system has collapsed and a new multipolar system has taken its place in the 21st century.

Paul Antonopoulos is a research fellow at the Center for Syncretic Studies.