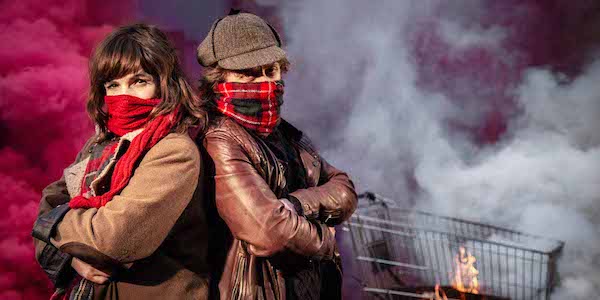 The mission: buy and write off £1m of household debt. The plan: follow in the footsteps of debt cancellation pioneers and galvanise the local community by harnessing the power of art, place and activism.

This is Bank Job, a jump into economic activism that takes you on a comedic, touching and educational journey. Throughout the film, co-directed by Hilary Powell and Daniel Edelstyn, we witness a carefully constructed blend of personal insights into the nuts and bolts of activism, interspersed with accessible lessons on debt and economics.

In 2018, the team created a ‘Rebel Bank’ in Walthamstow, London, where they printed and sold £40,000 worth of their own ‘banknote’ artwork. The proceeds were split between local projects that, in the filmmakers’ words, ‘pick up the pieces of our broken financial system’–a local food bank, homeless kitchen, youth project and primary school–and the purchase and cancellation of local high interest debt. Because debt can be sold for a tiny fraction of its ‘face’ value, they were able to buy £1.2 million worth of debt for just £20,000.

The story is truly on the money. Even prior to the COVID-19 crisis and the subsequent financial impacts for millions, roughly 3.2 million people in Britain were in severe problem debt. From September to November of 2020, someone was declared insolvent or bankrupt every 4:34 minutes–or 316 people each day. As John McDonnell, former Chancellor to the Exchequer asserts in the film, ‘debt is crippling people’.

Debt and economics are often framed as complicated topics, yet Bank Job is able to go a long way in demystifying such conceptions. Powell and Edelstyn reframe information with their quirky borrowing of stylistic influences from heist films, making for humorous lessons that offer welcome disruptions to the typical documentary narrative timeline. Indeed, Cambridge University economist Ha-Joon Chang remarked in Economics: The User’s Guide that ‘95 per cent of economics is common sense–made to look difficult with the use of jargons and mathematics’.

That common sense comes through here, in a stinging critique of the economic system, pervasive cycle of debt, work and their ruinous implications. Cue the start of Bank Job’s journey, in which we hear from leading economist Ann Pettifor and activists tackling the debt issue looking to create systemic change. Much of the inspiration for Bank Job’s mission can be found in Occupy Wall Street movement offshoot and debt cancellation pioneers Strike Debt, which provided the blueprint for similar attempts across the United States and beyond. A visit to the apt and playfully named Hoe Street Central Bank (HSBC)–a former Cooperative bank branch–from the late David Graeber felt like a touching tribute given his poignant and relevant writings in Debt: The First 5000 Years.

The action is centred in Walthamstow, but the real backdrop is austerity Britain and a deteriorated economic landscape indicative of neoliberal economic obsession and its legacy. The conspicuous reality of modern Britain is laid bare: food banks and soup kitchens are essential community services for alleviating hunger; education cuts are visceral; youth services and the opportunities they provide are hanging on by a thread, and highstreets are dominated by bookmakers and cash converters. This acutely real depiction of Britain elevates the documentary’s narrative and heightens the importance of the film’s central mission, while drawing stories and inspiration of community and mutual aid to the fore.

From repurposing a high-street bank and reconfiguring the visual identity of currency, to an explosive finale with London’s financial district looming in the distance, the story of Powell and Edelstyn’s mission to cancel £1m of household debt could not be told at a better time. The British government’s inept handling of the COVID-19 pandemic has been devastating for millions across the country and further exposed the brutal realities of the economic system.

Bank Job may well provide a spark for those looking for radical alternatives to provoke change. While Powell and Edylstyn don’t provide a step-by-step guide for groups looking to replicate their endeavours–though their book of the same title goes into more depth there–they do offer up a vision and call to action. ‘If elected officials won’t protect citizens from debt, people must instead’.

Bank Job is available to watch online, with screenings planned when cinemas reopen. On 26 February, John MacDonell MP will join the production team for a screening and Q&A. For tickets and information, see: membership.bankjob.pictures/stream