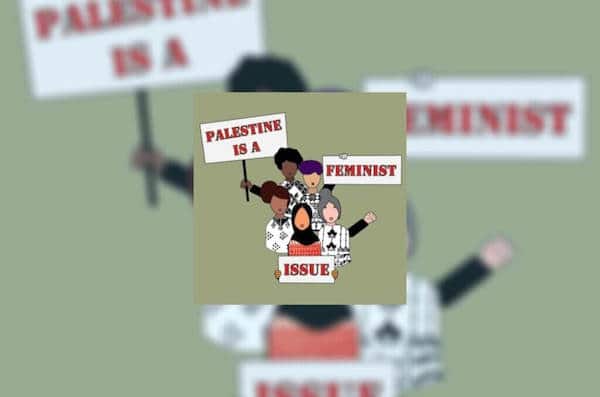 Women’s History Month is intended to redress the masculinist lens that otherwise obscures female achievements, by highlighting the accomplishments of individual women throughout history. This year, however, a newly formed collective, the Palestinian Feminist Collective, decided to look forward, rather than backwards, as it marked Women’s History Month by launching its first public campaign, a pledge and open letter asking allies to adopt Palestinian liberation as a critical feminist issue.

The pledge, which was first publicized on March 15, very rapidly garnered hundreds of individual signatures: over 2700 in under 48 hours, and over 150 organizational endorsements within that same time period. The signatures were rushing in from the US, where the pledge was launched, as well as Palestine, but also, within what felt like minutes, from numerous other countries, including Australia, Argentina, Kenya, South Africa, Sweden, Germany, Ireland, Brazil, the Czech Republic… Clearly the Palestinian feminist call was resonating with people of conscience around the globe.

The pledge opens with a recognition of “the history of Palestinian women and their co-strugglers who have worked to end multiple forms of oppression,” before committing to resist  “gendered and sexual violence, settler colonialism, capitalist exploitation, land degradation and oppression in Palestine, on Turtle Island, and globally.” And it asks endorsers for six concrete steps and commitments, which the PFC explains would advance a “truly intersectional and decolonial feminist vision” for the US, Palestine, and the world. Thus signatories are not merely stating that they support the Palestinian people, they are pledging to:

As it was posted on the Instagram account of the Palestinian Youth Movement, which co-founded the PFC, the pledge catalyzed many important discussions about the struggle of Palestinian women, and the term “feminism” itself. It was overall extremely well received, with many expressing gratitude for the analysis and organizing that went into drafting the finely crafted statement. A few, however, writing in both Arabic and English, criticized the use of the term “feminism,” saying it reeks of Western imperialism. “I don’t support anything when it uses Western terms instead of simple words. Like you can say women’s issues or something like women empowerment. But when it’s feminism everything messes up,” one poster commented. Another stated “I’m legitimately confused. How is it a feminist issue exactly?”

As I browsed the comments, I couldn’t help but smile at the fact that it was primarily men (or male-presenting profiles, anyway) who did not grasp how Palestinian liberation is a feminist issue. It was refreshing to see the grace and patience with which members of the collective responded. One explained:

This is a campaign focused on US women and feminist spaces and orgs which have historically abused women’s rights and feminist discourses to reproduce islamophobia and support US invasions of our countries and support military and financial aid for Israel. As women we do consider challenging Zionist propaganda in women’s orgs a priority, it doesn’t need to be your priority but it is for the group of 60 Arabs and Palestinian women and feminists who want to bring an end to the normalization of Zionism in social justice spaces and their ignoring of Palestine on their agenda. No one is forcing anyone onto this fight but it is part of our complex fight in the US, the field is yours you can certainly focus on other issues or all issues.

Looking forward to more conversations about this. Continue to engage with us as PYM and the PFC on this topic as we see it integral to our liberation struggle.

The pledge was also reposted on the Facebook page of Jewish Voice for Peace, where the conversation took on a different tone, as some (trolls?) suggested that feminism is “incompatible” with Palestinian society. But here too there was suspicion of the term, as one commentator warned:

Be very careful. The US likes to use feminist issues for regime change.

That comment was responded to by a member of the PFC, who explained:

We hear you… If you read the pledge carefully, it is clear the Palestinian Feminist Collective is rooting its feminism in Third World, Indigenous and Black Feminist Thought and Practice which is calling for the dismantlement of imperialism, racial capitalism, (settler) colonialism and drawing the crucial links between these forms of oppression with how they structure and interconnect with gendered and sexual violence. The pledge is in fact a rejection of Western/Liberal/Orientalist/Islamophobic/Imperial Feminism and an embrace of Palestinian liberation as key to a truly decolonized and intersectional feminism!

The debate around “whose feminism” is understandable, considering that one impetus for the pledge, as explained in the PYM moderator’s comment quoted above, is mainstream Western feminism’s utter disregard for the plight of the Palestinian people generally, including Palestinian women, and queers, whose lives are intimately impacted by Zionism. This is explained in the pledge itself, and has been amply documented for decades.  Nevertheless, in the US, as in many Western countries, Palestinian feminists and their allies have been marginalized from mainstream feminism, with its normalization of Zionism, revealing a willful blindness to the macro-environment of state violence. This is illustrated, for example, by the choice of Scarlett Johannson as a speaker at the 2019 Women’s March in Los Angeles. Johannson had earlier promoted the Israeli company SodaStream, even as she was an Oxfam ambassador. When Oxfam asked her to stop her commercial partnership with the Israeli company that had a factory in a West Bank settlement, Johansson dropped Oxfam instead. And when the South California-based Palestinian Arab Women’s Association explained to the organizers of the Women’s March that they would not participate in a rally at which Johansson was speaking, the Los Angeles Women’s March organizers ignored the Palestinian women’s concerns, opting to keep Johannson instead. There are numerous such incidents where, when Palestinians and their allies refuse to normalize Zionism, and insist that it is incompatible with feminism, they find themselves alienated and pushed out of white liberal “feminist” spaces.

It is also important to recall that, historically, it was women of color feminists, and specifically a Black feminist, Kimberle Crenshaw, who initially gave us the vocabulary of intersectionality, and the framework for the kind of feminism put forth in the PFC pledge. Of course, the concept, and the lived understanding of it, predate the actual term, as evidenced by Sojourner Truth’s insistent question, at a white women’s convention, “Ain’t I A Woman,” and Harriet Tubman’s activism in both abolition, and women’s suffrage. And while intersectionality has now been so readily embraced as to occasionally lose both accuracy and depth, it is also important to understand feminism as rooted in the idea of the indivisibility of justice. Failure to do so reinforces US/Eurocentrism, and disregards the radical feminist thought and practice that have given liberatory movements around the world the exact ideas and tools that they assume today.

Ultimately, even though this may not have been its intention, the pledge is also about reclaiming, not “redefining,” the term “feminism,” as Palestinians and our allies affirm, yet again, that one cannot be a feminist while supporting gendered violence, settler-colonialism, indigenous dispossession, and apartheid. Unlike what detractors have posted, feminism is not only “compatible” with Palestinian culture, it has long characterized Palestinian women’s struggles. There can be no free homeland without free women, and Palestinian women’s liberation cannot conceivably happen without the liberation of their communities and homeland, from imperialism, racism, and settler-colonialism, among other evils.

As we look forward to taking to the streets again, we should all start a new chant:

Whose feminism?
Our feminism!

What do we want?
No Zionism, no racism, no settler colonialism!