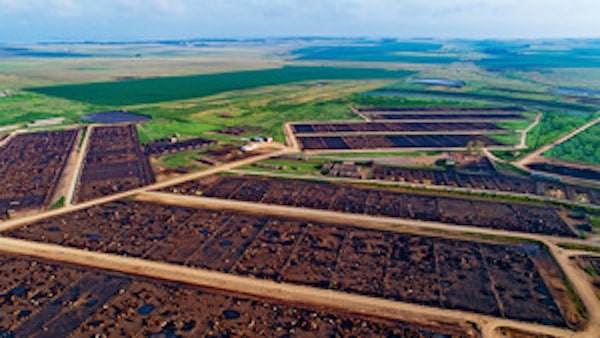 SARS-CoV-2, the coronavirus behind COVID-19, is on the march. It’s infecting hundreds of thousands of people a day the world over. In countries that handled the outbreak badly–among them the U.S., Britain and Brazil–government rhetoric has at times suggested, in the early days and pre-vaccine, letting the virus largely ‘run its course’. With little scientific backing, politicians such as Donald Trump have declared that a mythical herd immunity–leaving perhaps millions dead in its wake–will save us.

Agribusiness likewise proclaims that the industry that helped set loose many of this century’s deadly outbreaks is exactly the right path forward. The likes of the Animal Agriculture Alliance and the Breakthrough Institute say biosecurity, technology and economies of scale–bigger is better–are the only way to protect us from another pandemic. Never mind that agribusiness production and land grabs conducted in its name are documented to have driven the emergence of multiple pathogens in the past two decades.

How did we arrive at a historical moment when the very causes of the ongoing crisis are repeatedly presented as its solution?

From Europe and Africa, the various stages of capitalism that followed expanded across the Americas, the Caucuses and the tropics, turning locally tended food landscapes into export commodities. From 1700 to 2017, large-scale croplands and pasture expanded fivefold to 27 million km. The practice of industrializing livestock and crop production took off to new heights after the Second World War.

Forty per cent of Earth’s ice-free surface is now dedicated to agriculture and represents the planet’s largest biome. Many millions more hectares are to be brought into production by 2050, especially in the Global South, where what little ‘virgin’ farmland remains is to be cut out of the last of the rainforests and savannahs. The poultry and livestock alive today represent 72 per cent of global animal biomass, far surpassing the total biomass of vertebrate wildlife. Industrialized food animals are beginning to spread across the globe in veritable cities of pigs and chickens. What was once Planet Earth has been turned into Planet Farm.

These expansions are networked by circuits of capital and consumption. The circuits source an increasing volume of trade in live animals, produce, processed food and germplasm. The growing patches of monoculture are characterized by declining diversity in animals and crops, as technical interventions select a few genetic breeds over all others. Varieties also are being lost as companies consolidate.

Such economically driven shifts have produced profound impacts upon both our ecology and public health.

The production of limited lines of monogastric (‘single-stomach’) species, primarily pigs and poultry, is displacing locally adapted breeds of a wide array of animals across nonindustrial countries. Similar trends are found in crops feeding both human populations and industrial livestock. Along agriculture’s advance, primary natural habitat and nonhuman populations are contracting at record rates, destroying indigenous and smallholder land and livelihoods along the way.

Deforestation and development are increasing the rate–and taxonomic scope–of pathogen spillover from wildlife to food animals and the labourers who tend them. COVID-19 represents only one of a series of novel pathogen strains to have suddenly emerged or re-emerged in the 21st century as threats to humanity. These outbreaks–avian and swine influenza, Ebola Makona, Q fever, Zika, among many others–have all been tied to changes in production or land use associated with intensive agriculture, as well as logging and mining.

Pathogens emerge differently, depending upon place and commodity. But all are connected within the same web of environmental damage and global expropriation, which explains the cross-continental nature of the new pathogens. SARS in China. MERS in the Middle East. Zika in Brazil. H5Nx in Europe. Swine flu H1N1 in North America.

How does production drive these outbreaks? At one end of a region’s nascent commodity chain, the diverse complexity of primary forest typically bottles up ‘wild’ pathogens. Potential hosts are irregularly encountered. But transnational logging, mining and intensive agriculture change these dynamics. They drastically streamline that natural complexity. While many pathogens on such neoliberal frontiers die off along with their host species, a subset of infections that once burned out relatively quickly in the forest can suddenly propagate much more widely.

Ebola offers a classic example. Since the mid-1970s, Ebola outbreaks typically besieged a sub-Saharan village or two before dying out. In 2013-15, the Makona strain emerged along a frontier of monoculture oil palm and other crops out of an increasingly expropriated and globalized West African landscape.

Although little differentiated it in its genetics or clinical course compared to previous Ebola outbreaks, the Makona strain would go on to infect 35,000 people, killing thousands living in major cities and suddenly only a flight away from the rest of the world.

Other diseases emerge at the other end of the production chain. Deadly and human-adapted avian and swine influenzas typically crop up in intensive operations located closer to major cities North and South. Of the 39 documented transitions from low to high deadliness in avian influenzas from 1959 onwards, all but two occurred in commercial poultry operations, typically of tens or hundreds of thousands of birds. Intensive operations are so inundated with circulating avian and swine influenza that they now serve as their own reservoirs for new strains. Populations of wild waterfowl are no longer the only source.

What is it about industrial farms that makes them breed such infections?

Industrial turkeys are grown in barns of 15,000 birds. Industrial layers (hens that lay eggs) are stocked in barns of up to 250,000 birds. Growing animals in vast monocultures removes the immune firebreaks that would ordinarily cut off outbreaks in more diverse populations. Pathogens routinely evolve around the now commonplace host immune genotypes of industrial livestock. Overcrowding and poor hygiene induce intense stress in such food animals, which can depress their immune response and make them more vulnerable to infection. Housing high concentrations of livestock and poultry rewards those strains that can burn through them fastest.

Animals are now slaughtered at ever younger ages. Growing out chickens in only 6 weeks and pigs in 22 weeks may select for greater pathogen deadliness, including infections that are able to survive younger, more robust immune systems. ‘All-in/all-out’ production–an attempt to control outbreaks by growing out livestock in batches–may unwittingly select for an infection threshold that lines up with finishing times the industry sets for its herds and flocks. That is, successful strains evolve life histories that kill grown-out farm animals near slaughter, when stock is most valuable.

With no reproduction on-site and breeding conducted offshore–largely for market traits like more meat and fast growth–livestock populations are also unable to evolve resistance to circulating pathogens. As survivors do not breed, they cannot pass on their resistance.

Beyond the farm gate, the increasing distance live animals are shipped has expanded the diversity of the genetic segments that pathogens exchange, increasing the rate and combinations over which diseases explore their evolutionary possibilities. The greater the variation in their genetics, the faster pathogens evolve. 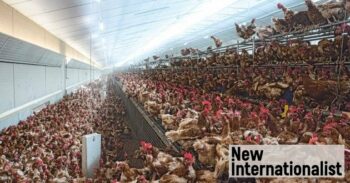 When thousands of genetically identical birds are stacked together–like these chickens on a farm in France–there are no immunological firebreaks to stop the spread of disease. GETTY IMAGES

COVID-19 origins are something of a mixture of these two ends of our circuits of production, the forest and the industrial farm.

Coronaviruses are hosted by bats around the world. But the strain that bats host in China appears to hit humans worse once it successfully jumps species. The environment in which these bats live has also changed in foundational ways.

Upon its economic liberalization post-Mao, China undertook the BRICS route of development, intent on feeding its own people with its own natural resources. Millions were pulled out of poverty. Millions were left behind. Pro or con, in taking this course, Chinese agribusiness and an increasingly capitalized wild-foods sector cut into the landscape of central and south China, where many of these bat populations are located.

As with Ebola, the interfaces among the bats, livestock, wild-food animals, farmers and miners on this commodity frontier expanded, boosting the traffic of various SARS-like coronaviruses. Increasing pesticide applications, at a scale far beyond even an already drenched U.S., may have reduced the insect populations bats feed on. This may have increased the interface coronavirus hosts shared with human populations as bats expanded their foraging range looking for food.

With the wild-foods and agricultural production lines increasing in extent and speed, many a SARS-like coronavirus that successfully spilled over into a food animal or into a human could now make its way in short order across the peri-urban landscape to regional capitals such as Wuhan before hopping on the global travel network.

It all seems such a trap. Is there anything we can do?

Yes, there is. We first must reject the ‘normal’ that brought us this mess. Growing food isn’t about making objects. Food items aren’t widgets. Agriculture must be turned from an industrial economy back to something more like a natural economy. We must return to assimilating a respect for food’s context–the soil, water, air, ecological matrix and community wellbeing on which food, and the people who eat it, depend.

To box out the deadliest of pathogens, we must preserve forest (and wetland) complexity, maintaining ecological buffers across bats, geese, other natural disease reservoirs, our food animals and our communities. We must reintroduce agrobiodiversity into livestock and poultry to serve as an immunological firebreak against deadly pathogens both on farms and across whole landscapes. We must return to letting livestock reproduce on-site so that herds and flocks can protect themselves against pathogens in real time. Such interventions require restoring the locus of control to rural communities, and away from agribusiness.

In short, to keep the worst of outbreaks from emerging in the first place, we must turn to the kind of state planning that centres farmer autonomy, community socioeconomic resilience, circular economies, integrated co-operative supply networks, land trusts and reparations. We must undo deeply historical race, class and gender trauma at the centre of land grabbing and environmental alienation.

On the world stage, we must end the unequal ecological exchange between Global North and South. Healing the metabolic rift between ecology and economy that drives pathogen emergence (and climate damage) at the heart of modern agriculture involves planting a different political philosophy.

Betting that agribusiness, the major source of the pandemic problem, will provide the solution is otherwise at best futile. We can do better thinking (and acting) anew.

Rob Wallace is an evolutionary biologist and public health phylogeographer presently visiting the Institute for Global Studies at the University of Minnesota. He is author of Big Farms Make Big Flu and the soon to be published Revolution Space, both with Monthly Review Press. He is co-author of Neoliberal Ebola: Modeling Disease Emergence from Finance to Forest and Farm, and Clear-Cutting Disease Control: Capital-Led Deforestation, Public Health Austerity, and Vector-Borne Infection. He has consulted for the Food and Agriculture Organization of the United Nations and the Centers for Disease Control and Prevention.