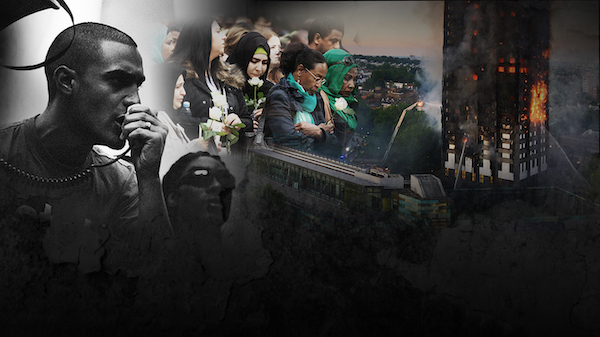 Four years after the Grenfell Tower fire, rapper and activist Lowkey is drawing attention to the tragic fire that ripped through the North Kensington tower block on June 14, 2017 — killing 72 people in a low-income community.

Lowkey takes aim directly at Britain’s Prime Minister Boris Johnson and the country’s neoliberal establishment and greedy corporate interests, blaming them for the tragedy and the lack of accountability that followed.

Meanwhile, primarily low-income residents in London’s largely immigrant communities have been saddled with huge bills to replace aesthetic cladding put on their buildings by greedy developers to boost property values and rent. The same type of cladding that caused the deadly inferno at Grenfell.

Thousands across London are still living in buildings covered in this flammable cladding. And despite years of protests and calls for the government to intervene, it has instead put this crisis in the hands of the same major real estate corporations that caused the problem in the first place.