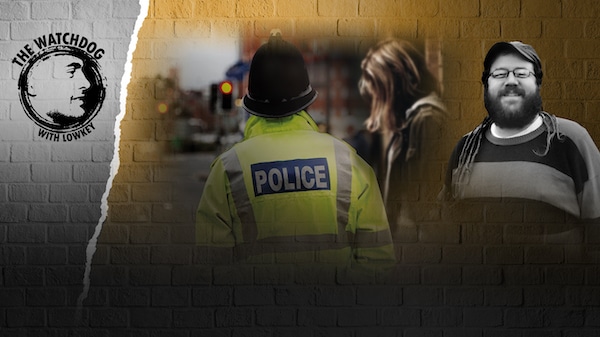 The new MintPress podcast, “The Watchdog,” hosted by British-Iraqi hip-hop artist Lowkey, closely examines organizations about which it is in the public interest to know—including intelligence, lobby and special-interest groups influencing policies that infringe on free speech and target dissent. The Watchdog goes against the grain by casting a light on stories largely ignored by the mainstream, corporate media.

Since the 1960s, the U.K. police have been charged with surveilling and infiltrating some 1,000 political, environmental or social justice organizations. Much of this involved undercover work. As part of their false personas, many officers entered romantic relationships with activists, leading to the births of a number of children whose mothers were completely unaware of their partners’ double lives. More than 20 women have come forward to claim they were “raped by the state” in such a way.

Today, The Watchdog is talking to Tom Fowler about the so-called “Spycops” scandal in the United Kingdom. Fowler is a veteran activist from South Wales involved with a number of groups that were spied upon and infiltrated by police. His work can be found at SpyCops.Info, where he hosts a weekly podcast that shines a light on police malfeasance.

In this conversation, Fowler notes that after the spectacular success of the anti-Vietnam War movement in the United Kingdom, the police have looked for any way to prevent other widespread radical movements from gaining momentum. In time, this technique expanded to the point where spy cops had infiltrated virtually the entire New Left, as well as the environmental movement and anti-war groups. Greenpeace, the Campaign for Nuclear Disarmament, the National Union of Rail, Maritime and Transport Workers, and the Fire Brigades Union were all targeted.

So effective was this strategy that, at one point, the National Secretary of the Troops Out [of Northern Ireland] movement was an undercover police officer. On the other hand, the police showed no interest in surveilling violent far-right gangs or organizations, with which they became almost tacitly aligned.

And while so many commentators complain about the excesses of cancel culture, the police are known to have worked with the private sector to maintain a secret blacklist of radical subversives (i.e., people who were the best union organizers), who were barred from jobs in their professions. In this sense, they became the enforcers for the upper class.

The police have been less than forthcoming throughout the Spycops scandal, attempting to deny as much involvement as possible. To what extent is this policy still in place? And what techniques do police continue to use to infiltrate and derail any movement challenging the status quo? Fowler and Lowkey discuss all this in a free-flowing and explosive conversation.