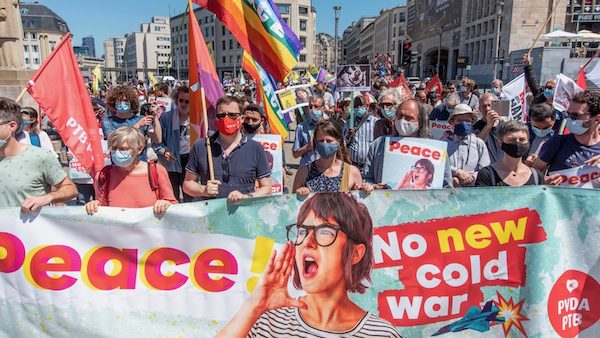 Anti-NATO and anti-war protest in Brussels, on the day of the NATO summit in the city on June 14, 2021. Photo: PTB

China has slammed G-7 leaders for pushing an aggressive agenda against itself and Russia. The 47th G-7 Summit in Carbis Bay, United Kingdom, concluded on Sunday, June 13. It was attended by the leaders of the seven global north nations and European Union, who form the core membership of the group, and with India, South Africa, South Korea and Australia as invitees.

In the three-day long summit, leaders led by United States president Joe Biden pushed for an aggressive stance against China and Russia, two of the emerging global powers. In the final joint communique that was released the seven governments and the EU pushed for “collective approaches” to counter policies of the Chinese government that allegedly “undermine the fair and transparent operation of the global economy.”

The communique also made sweeping statements on the situation in Hong Kong and Xinjiang, made unsubstantiated allegations of forced labor, called for an investigation into man-made origin theories of COVID-19, and called for a “free and open Indo Pacific” in the context of stained relations between mainland China and Taiwan.

The language in the communique and by Biden himself resurrected the same unsubstantiated allegations raised by the previous U.S. administration under Donald Trump.

In response to the meeting, the Chinese embassy in the UK commented that the “days when global decisions were dictated by a small group of countries are long gone.” They added that any matter of global affairs needs to be decided in consultation with all nations as per the “basic norms of international relations based on the purposes and principles of the UN Charter, not the so-called rules formulated by a small number of countries.”

The embassy also countered the statements on Taiwan, Xinjiang and Hong Kong and alleged that the leaders distorted the facts, exposing the “sinister intentions of a few countries such as the United States.”

The G-7 nations also pledged a long overdue spending commitment of USD 100 billion for poorer nations to transition to cut carbon emissions and mitigate global warming. In 2009, as part of the Copenhagen Accord, advanced economies had made a pledge to contribute USD 100 billion per year until 2020.

The target was never met, and the G-7 nations have often deliberately derailed the commitments, which led to the 26th Conference of Parties (COP26) of the United Nations Framework Convention on Climate Change (UNFCCC). This long overdue funding is now revived as part of measures to counter competition from China and its trillion-dollar Belt and Road Initiative.

The G7 meeting was followed by the North Atlantic Treaty Organization (NATO) summit on June 14, Monday, where again the same leaders continued to push an aggressive stand against China and Russia. In the final communique by the 30-member organization, the leaders of the summit called China’s “stated ambitions and assertive behavior present systemic challenges to the rules-based international order.”

Sweeping statements on “lack of transparency and use of disinformation” and “coercive policies” were made in the communique, reiterating the same allegations made in the G7 communique.

Unlike the G7, which emerged as a platform for economic cooperation among some of the richest nations, NATO is a military bloc that emerged during the Cold War with an explicit purpose to contain the Soviet influence and growing communist movements around the world. This, along with a contentious NATO military exercise in South China Sea, indicates that the U.S. and its allies wish to expand their aggression with China into a militaristic competition as well.

In the meanwhile social movements and peace movements are coming together to oppose these latest escalation of tensions by western powers. A public meeting scheduled to be held on June 16, Wednesday, will launch the No Cold War Britain campaign, to oppose the “increasingly aggressive statements and actions” towards China by the U.S.

The organizers of the meeting have described the newly-emerging Cold War with China as “an obstacle to humanity successfully dealing with extremely serious common issues which confront it such as climate change, control of pandemics, racist discrimination and economic development.”

Several prominent progressive public figures including Vijay Prashad from the Tricontinental Institute, Andrew Murray of the Stop the War Coalition UK, Fiona Edwards of the No Cold War, Jodie Evans of CODEPINK, and Ben Chacko (editor of the Morning Star) among others, will be speaking at the event.

“In the midst of a pandemic, the only way forward is for the states of the world to collaborate with each other rather than to intensify competition,” insisted Vijay Prashad, while speaking to Phoenix Media Co-op.

The conflict imposed on China is a distraction from the many compelling problems we face, at the heart of it all being the virus and the economic collapse that has come as a consequence. We need collaboration to deal with both.

The plan to launch a unified campaign against cold war aggression in the UK, comes at a time when the British government has sent its largest warship, HMS Queen Elizabeth, along with other warships to South China Sea to participate in NATO naval exercises.

Pointing out how the decision to participate in the exercise is both “aggressive and a total waste of resources” Fiona Edwards stated that “instead of wasting billions of pounds on weapons of mass destruction and supporting the U.S.’s military build-up against China, Britain should genuinely pursue dialogue and global cooperation with China to tackle the immense problems facing humanity.”

Medea Benjamin of CODEPINK questioned the anti-China push by Biden. “Biden says at G7 press conference that the only way we will meet global threats, including ending the pandemic and combating climate change, is by working together. Then why all the trashing of Russia and China?,” she asked in a tweet.