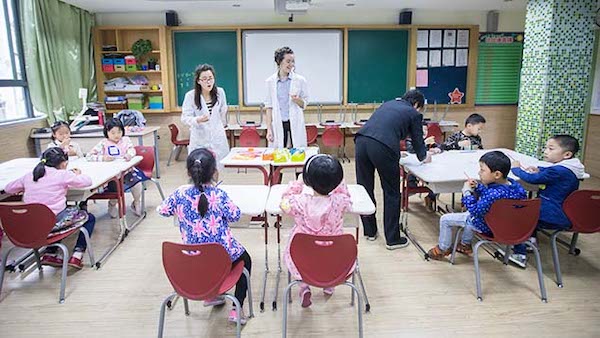 Multiple Chinese provinces are prohibiting the expansion and establishment of private primary and secondary schools in a bid to create a more equitable education for all.

Authorities in central Hunan province and the eastern Jiangsu province are the latest to outline plans capping the number of students attending private schools to below 5% in the next few years, financial outlet Caixin reported Tuesday. The move came just over a week after southwestern Sichuan province announced it would not approve any new private primary and secondary schools or allow existing institutions to expand operations as of this year.

China is attempting to rein in the private education sector and direct more students to public institutions that provide nine years of free compulsory education from the age of six. Authorities have stated that basic education is a “public good” and not something that should be paid for.

In April, China revised its law on private schools, holding such academic institutions to new restrictions and regulations. It prohibited the establishment of private schools using public resources and specified that existing public schools cannot set up private branches.

Wu Wei, a mother of two in the southern city of Shenzhen–which so far remains unaffected by such rules–described how the public education system there provides access to free schooling for all. However, she criticized the pressure placed on children to perform well on exams and standardized tests at Shenzhen’s public schools.

Wu added that top public schools are the first choice for many parents, and many would only consider private schools should their children not make the cut.

“Most parents prefer to send their children to top public schools, if possible, given the guaranteed quality of those schools,” she told Sixth Tone.

If educational resources are no longer free, average children won’t stand a chance.

In China, many parents opt to spend hefty tuition at private institutions, hoping to give their children a better jump-start academically. Many also choose private education because otherwise, their child’s hukou would restrict attendance to only those schools in the district where their household is registered.

Limiting the number of private schools may reduce the financial burden for some parents, many of whom are paying increasingly high tuition for their children to receive a quality education, according to domestic media. In addition, experts say that by restricting such institutions, authorities want to make public schooling more accessible to everyone.

“Private schools are not going away. Rather, the number of private institutions is being controlled,” Xiong Bingqi, deputy director of the education think tank 21st Century Education Research Institute, told Sixth Tone.

If the quality of public education continues to improve, there will be a drop in the demand for private education.