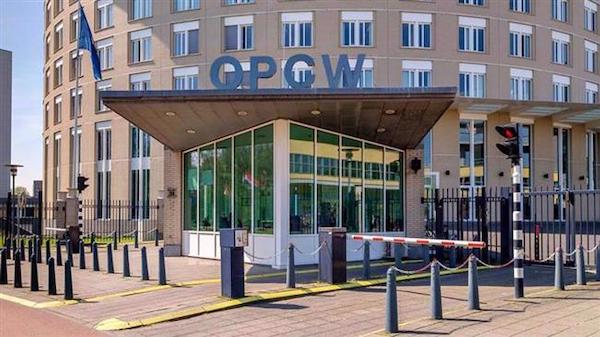 This file photo taken on April 18, 2018 shows the logo of the Organization for the Prohibition of Chemical Weapons (OPCW) pictured outside the headquarters in The Hague, the Netherlands. (By AFP)

It is a “tragedy” that the Organization for the Prohibition of Chemical Weapons (OPCW) has been “corrupted” in a way that it is being used as a “puppet” by the West to exert pressure on Syria rather than being an international and technical monitoring organization, the former British ambassador to Syria tells Press TV.

Peter Ford, who is also an expert on West Asian affairs, made the comments from Manchester during Press TV’s Spotlight program, which was aired on Friday night.

He said that he was completely in agreement with what the Syrian government has recently reiterated that the global chemical watchdog is no longer a technical organization but a political tool in the hands of the United States, the United Kingdom, and France to exert pressure on Damascus.

“Sadly I have to agree one hundred percent with that take on the OPCW. It is a tragedy that a very important international monitoring body should be corrupted in this way by being politicized by Western powers. The OPCW should be playing an impartial role and should be seen to be extremely impartial. But for the last few years, decision after decision, it is shown that it is a puppet of the Western powers,” Ford said.

He added that the UK and the U.S., in particular, were responsible as they have staffed the OPCW with officials from their own administrations.

These officials do not respect the impartiality of the watchdog but rather “carry out the wishes of their masters in Washington and London. This is basically why the OPCW is well underway to be completely discredited,” Ford further said.

Comments by the former British ambassador to Syria came hours after the chairwoman of the Syrian mission to the OPCW said the U.S. and its allies had lowered the status of the international watchdog, and turned it into a political tool to level baseless accusations against Damascus and exert pressure on it.

Addressing the 97th session of the Executive Council of the OPCW, Rania al-Refaei stated earlier on Friday that anti-Syria claims are meant to advance the agendas of certain countries, and implement the plots hatched by terror outfits.

She categorically dismissed allegations that the Damascus government has chemical weapons in its possession, terming such accusations as “spurious and unfounded.”

Syria surrendered its stockpile of chemical weapons in 2014 to a joint mission led by the U.S. and the OPCW, which oversaw the destruction of the weaponry. It has also consistently denied using chemical weapons.

However, the Western media and governments have repeatedly accused the Syrian government of using chemical weapons against its own citizens in the war against terrorists.

The OPCW, in line with the Western powers, accuses Damascus of using chemical weapons, including an alleged attack in Hama in 2017. Damascus has repeatedly rejected such accusations, describing them as false flag operations.

Elsewhere in his remarks, Ford said that the Western powers and the so-called rebels obviously benefit from such accusations and false flag operations.

“The Western powers needed to justify their illegal bombing of Syria. That’s why they can never admit, that it was carried out on the basis of falsehood. That’s why they continue to sustain this lie. They have to justify their continuing of war on Syria which mainly takes the form of economic warfare, in the shape of sanctions and withholding reconstruction,” he added.

Brussels-based Elijah Magnier, a veteran war-zone correspondent and political analyst covering West Asia and North Africa, was the other panelist invited to the Spotlight program, who also confirmed that the OPCW’s reports have been politicized.

“When Jose Bustani came out with his narrative saying that we inspectors are scientists and according to scientists’ opinion there is no chemical attack on Douma. The reason why the OPCW is insisting is to justify the U.S., UK and France’s attack on Damascus. The whole world watched that the OPCW is lacking trust these days, particularly after the Douma attack and it is obvious that a lot of pressure was put on the organization,” he said

If the decision is made before the attack by the West, there is no need to go there and gather evidence impartially, Magnier added.

On April 7, 2018, an alleged chemical attack hit the Syrian city of Douma near the capital Damascus. Western countries were quick to blame it on the government of President Bashar al-Assad.

A week later, the U.S., Britain, and France launched a coordinated missile attack against sites and research facilities near Damascus and Homs with the purported goal of paralyzing the Syrian government’s capability to produce chemicals.

Damascus, however, said that no chemical attack had happened and that the Douma incident had been staged by foreign intelligence agencies to pressure the government in the face of army advances against militants.

In October 2019, Jose Bustani, the OPCW’s first chief, said that convincing evidence of irregular behavior in the OPCW investigation of the alleged Douma chemical attack confirmed doubts and suspicions he already had.

In October next year, he was scheduled to testify at the UN Security Council about the alleged cover-up by the OPCW regarding the Douma chemical attack. However, the U.S., UK, and France blocked Bustani from testifying, claiming that he left the watchdog in 2002 and thus was not involved in the issues being discussed.

Nevertheless, the Russian envoy at the UNSC read out Butsani’s statement, which stated that the OPCW engaged in “evidence suppression, selective use of data and exclusion of key investigators” when it was making its report about the so-called Douma chemical attack.