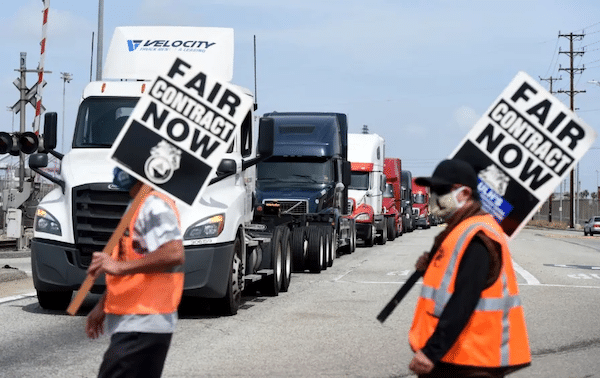 The state of the American labour movement has, since the mid-1970s, been dispiriting. There have, of course, been moments of creative and inspiring resistance, but the predominant story has been a chronicle of decline: private-sector unionization rates below where they were a century ago, the abject failure to make breakthroughs in key emerging sectors, defensive stagnation in bargaining achievements, and–election-year rhetoric aside–the political marginalization of working-class concerns.

The revival of the working class as a social force is the definitive economic and political challenge now confronting the American left. Whether the post-pandemic moment will be a turning point with unions poised for a new militancy, and whether the recent delegitimation of state and political institutions might lead to a sustained revival of progressive class politics, are open questions. It “depends.” And what it depends on will have a lot to do with what happens in organizing at the workplace level.

Which is why, by Jane McAlevey and Abby Lawlor, is a rare piece of good news. Published by the UC Berkeley Labor Center, it builds on McAlevey’s earlier works, adding new case studies on the detailed process of collective bargaining (often foreign territory to many workers and labour academics), incorporates participant interviews, and focuses laser-like on the challenge of exactly how to raise worker expectations and actually win.

Written as a “report” on new bargaining experiences in the health, education, and hospitality sectors and among journalists, Turning the Tables is essentially a comprehensive handbook for workplace organizing. The specifics of the method are presented in admirably clear prose, while the rich case studies illustrate and validate the underlying organizing method. The interviews underline the exhilarating emergence, through the bargaining process and strikes, of workers’ strategic skills and confidence.

Most of all, the case studies highlight the difference between going through the motions versus actually organizing. In too many unions preparing for bargaining, surveys on workers’ preferences are generally pro forma, generating minor interest; in the case studies here, surveys repeatedly become a tool for generating intense collective discussions. In their communications strategies, unions have been catching up on the use of social media; here the emphasis is on labour-intensive direct contact. As a psychiatric nurse asserts:

Facebook is helpful. Email is helpful, Texting is helpful. But there’s still nothing that beats that one-to-one communication.

Similarly, opening the actual bargaining sessions to members is about more than being “inclusive” (important as that is). The experience also tends to sharpen the separation from management, build trust in the union, and create a sense of the larger collective. A teacher notes that with open bargaining “everybody gets to hear what is happening in other people’s worlds.” Another adds that having far more members engaged in day-day bargaining “knits you together as a community.” In the small rural town of Greenfield, the Massachusetts Nurses Association even opened up its bargaining to include members of the community.

Yet, while McAlevey has inspired a remarkable domestic and international following, she also has her critics. One wing of that criticism surfaced after McAlevey’s recent argument that the drive to organize Amazon’s warehouse in Bessemer, Ala., did not incorporate “best practice.”

Some, though acknowledging that McAlevey’s specific criticisms had validity, charged that expressing them publicly in the aftermath of a painful defeat was a betrayal of solidarity and amplified worker demoralization. Others went further and questioned the very notion of “best practice.” Every organizing drive and bargaining campaign, they argued, is context-contingent and varies with the main concerns of workers, the sector involved, the nature of the workplace, the balance of power between workers and employers, and so on.

The reproach for speaking out does the labour movement no favors. It comes disturbingly close to echoing familiar appeals for “unity” and “solidarity” from union leaders more interested in silencing their opposition than in risking what it might take to win. Restricting controversies to private circles rather than dealing with them in the open is both patronizing to workers and counterproductive. The Bessemer defeat was the right time to raise hard questions, because it was a moment when the movement was paying attention.

Arguing that McAlevey’s particular approach falls short is one thing. It is, however, quite another thing to cavalierly dismiss the very attempt to develop a best practice in building worker power. McAlevey’s work, culminating in Turning the Tables, makes a convincing case that such a core of strategic principles–a method–is indispensable.

McAlevey’s method is based firmly on workers’ self-determined needs; appreciating that “class” is experienced both inside and outside the workplace; focusing on informal leaders as catalysts to the broadest membership participation; applying structure tests to assist workers in collectively assessing the depth of their strength; and increasing the degree of direct worker participation in bargaining (“Big Bargaining”).

A longer-standing and more substantive critique of McAlevey’s approach is that it is “staff driven”–controlled not by the workers themselves but by outsiders. This notion that workers are spontaneously radical but limited in expressing this by staff and bureaucratic leaders standing in their way is blindingly naive. Are we truly to believe that workers can one day take on capitalism and transform the world but are incapable of taking on their own elected leaders? It should be clear to anyone who has interacted with working people that they have no “inherent” nature; workers can be radical or conservative. Capitalism has, through the logic of its structures, created a working class whose daily experiences push it to a dependence on employers, drive it–out of necessity–to short-termism and pragmatism, divide and fragment it multidimensionally, and often leave it too exhausted to be actively engaged.

The challenge–the active organizing challenge–is to build on the contradictions within capitalism to support the remaking of the working class: to develop the individual and collective potentials of workers into a coherent, confident, and creative social force capable of leading a struggle against not only their employer but eventually capitalism itself. Such organizing cannot be achieved without “leadership”; the question is what kind of leadership, with what relationship to the workers affected? Above all, does the overall strategy adopted in the workplace contribute to developing the individual and collective strength of workers in a way that is self-sustaining after the organizers leave? (The absence of such lasting power is the basis for McAlevey’s critique of Saul Alinsky.)

The defining principle of the method that McAlevey learned and adapted through her time at New England Local 1199 (itself modeled on the CIO organizing of the 1930s) begins and ends precisely with the basic democratic principle of broadening and deepening the participation of the workers involved. It starts with the commonsense understanding that workers develop unevenly, and this is where the informal workplace leaders, as opposed to those appointed or selected via a caucus, come in. They may or may not originally be pro-union–but they are central because they are defined by the trust fellow workers have in them. The crucial role of the organizer is to find such leaders and win them over. It is these informal workplace leaders–and not outside organizers–that are to become the key catalyst to reaching and activating the rest of the workforce. And the ultimate goal is that a significant majority of workers become organizers in their own right.

Actual “staff driven” unions–code for bureaucratic, top-down unions–will not touch McAlevey with a 20-foot pole. Such union leaders fully understand that the threat implied by McAlevey’s approach to organizing is precisely that it may make their lives less comfortable by raising expectations, encouraging far greater direct worker participation in bargaining, developing confident and active members, and opening the door to new leaders who might challenge those currently in place.

McAlevey’s method may not meet some “revolutionary” test, but its proven successes, ratified in practice by workers and further corroborated in Turning Points, underscores the crucial truth that workers can achieve valuable, if partial, victories even within capitalism. There are, indeed, limits to her method. It cannot for example be applied–at least not without significant modifications–where union leaders are hostile; the strategies for replacing such leaders does not fully parallel those for fighting the boss. Overcoming competitive relationships across unions also demands further changes.

The realities of a capitalist economy remain challenges not only for McAlevey but for all union activists–and the left as a whole. Organizing at the union level cannot be directly translated into organizing politically for a more egalitarian, democratic, environmentally sustainable society; political organizing is a distinct sphere of activity. Nevertheless, even there, the invaluable tool kit McAlevey has provided can advance the task of developing a working class with the vision, capacities, and self-confidence to go further.

Two specific elements of her method are especially critical. The first may seem obvious: organizing rooted in the workplace. But the extent to which the postwar history of trade unionism has involved retreating from or trading off workplace rights and power for centralized and technical collective bargaining cannot be stressed enough. In this regard, bureaucratization has indeed been a barrier to working-class achievements. Equally problematic are calls for “social unionism”–investing in recruiting new workers to the union without appreciating the centrality of first educating, developing, and maintaining the existing workplace base. Without that base, progressive intentions will be internally undermined.

A second crucial contribution is McAlevey’s emphasis on wall-to-wall “industrial” bargaining–bringing all workers in a workplace together regardless of differentials in status. Along with opening the door to regional or sectoral organizing and bargaining, this promotes the practical importance of the class sensibility that is fundamental as well to a larger politics. And that impetus to a class perspective is further reinforced by mapping what/who you are up against, who is potentially on your side, and in erasing the often “artificial distinctions between ‘workers’ and ‘community.’”

Workers may share class indignities, but, siloed in their individual unions and struggles, they are not a class in any coherent ideological or applied sense. And their formation into a class cannot be assumed or wished for–nor can it be conjured up by uncritically celebrating failed efforts. It can only happen through struggles, experimentation, evaluating lessons learned, and the emergence of institutions to facilitate this process. McAlevey’s great contribution has been her determination to enter into this process with eyes wide open, a faith in the individual and collective potentials of working people, and an indefatigable drive to systematize experience and lessons.