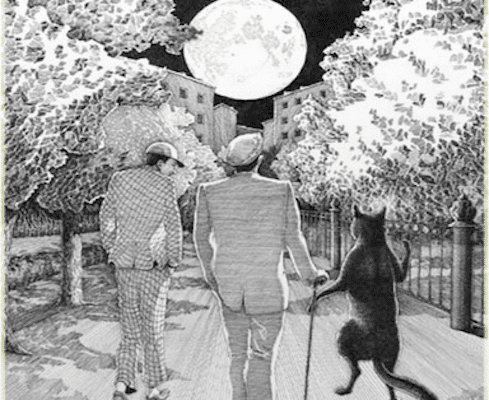 I write to you today from Helsinki, this summer’s vacation destination chosen not only because Scandinavia is enjoying an usually warm and sunny season, unlike Central Europe even putting aside the latest, once in five hundred years devastating floods that have struck Germany and Belgium; not only because the White Nights, even in these final weeks, lend a magical quality to the trip, when we can enjoy 20 hours gazing at the calm sea that stretches out below our balcony; but also because Finland is one of the very few “green” countries on the Covid map, meaning that the infection rate remains far lower even that in Belgium, newly upgraded to “orange,” and we can delight in a hotel stay without worrying unduly over anyone around us who may sneeze or cough once or twice.

Apart from swimming in the sea and visiting some downtown museums that escaped our attention on past visits to Helsinki, these lazy summer days are given over to reading. I am now wading through Bulgakov’s brilliant novel Master and Margarita (in Russian) and mentally cross-referencing what the author was saying very boldly and insightfully about Soviet society of his day, namely 1935, and what I see around me in American and West European society and politics.

I was a latecomer to this novel. In my student days I had read only Bulgakov’s Heart of a Dog, which I found only mildly interesting. I discovered Master with the help of my wife, when she bought and we watched the many hours long serialization of the novel made in Russia in 2005 and shown then on the state television channel Rossiya before release as a set of DVDs. There was a long-suppressed movie of Master that preceded the television serial and another movie is said to be underway in Moscow studios at present. But that 2005 serial captured the very best of Master and may be credited with fantastic direction by Vladimir Bortko and very successful casting. It is hard to imagine anyone presenting a better Voland than Oleg Basilashvili, a better Pontius Pilate than Kirill Lavrov, a better Margarita than Anna Kovalchuk or a better Azazello than Alexander Filippenko. The original musical score was also extraordinary.

The only possible criticism one might make pertains to the final installment of the serial, where the director, who apparently also was responsible for the script, went beyond the novel to make explicit what otherwise is implicit in Bulgakov’s text: that the whole of Soviet society in the period of the Great Terror was experiencing mass hypnosis. It is such hypnosis which the head of the security services (NKVD), a Goebbels-like figure, uses to explain to the public gathered in the city planetarium the bizarre events that have accompanied the visit to Moscow and demonstration of “black magic” at the Varieté theater by the foreign “consultant” Voland (Satan). In these conditions, sane and reasonable people were locked up in madhouses, as was the Master and several of the other characters in the novel. The truly insane were out in the streets.

As I now read the novel, the moral of the story is driven home with ever greater clarity. And it leads me to draw comparisons with what has been going on in the United States ever since 9/11 tipped the whole country into paranoia. Two thousand people died in the attack but you would think it had been millions and that the attack had been made not just on two buildings in NYC and one in Washington but on the nation at the level of every hamlet. What was punctured was the belief in the inviolability of the United States. What followed from that was naked fear, and from fear came the readiness to point fingers.

There have been recurrences of this madness, of mass hypnosis ever since Putin’s 2007 speech to the Munich Security Conference, which touched off a vicious and never ending vilification of Putin, the Kremlin, Russia and Russians led from the White House and amplified by all state controlled media, meaning ALL MEDIA.

Yes, this hypnosis was very effective. The whole country was brainwashed, including my sister in New Jersey and a great many of our now former friends and acquaintances. The entire Russiagate story about the theft by Russians of documents from the DNC server for the purpose of destroying candidate Hilary Clinton’s reputation, the Steele dossier on the alleged mad behavior of candidate Donald Trump and other featured fake news ever since the summer of 2016 are just variations on that theme.

In my occasional appearances as interviewee on RT International, I am often asked to comment on the lack of proper proofs for allegations of violations of international law, egregious misconduct by the Kremlin, whether it be large issues like the Skripal poisonings or small charges that arise almost weekly. I disappoint my hosts by saying that the details of the case are irrelevant because the overriding issue is the campaign led by the United States and supported by the European Union to blacken the reputation of Russia and punish it as a pariah state. And this denigration has nothing “personal” about it: the final objective is to knock out the Russian Federation as a challenger to U.S. global hegemony. Regime change is just a means to that end.

The same issue arises in my periodic interviews on Belarus television, one of which took place just two days ago. I was asked to explain why the Federal Republic of German does not respond to the new complaints by Minsk that it is harboring terrorists who are planning attacks on Belarus. My answer was not to be surprised in the least, given that Germany and the EU as a whole were dead silent when less than two months ago the Russians showed on state television plotters from among Belarus opponents to the regime with support from Lithuania and the USA planning the assassination of President Lukashenko and his family so as to install a new pro-Western government. The point, as I said, is that Belarus is only an instrument in the hands of certain EU member states, with financial and technical backing from Washington, to strip away another critically important buffer state protecting Russia from NATO on its borders. The objective is precisely the same as noted above: to compromise Russian security and remove the challenge to U.S. global hegemony.

And yet again the same kind of issue arose a day ago when colleagues asked me to help “debunk” the latest set of empty, unsupported and unsupportable allegations published in The Guardian about Putin’s measures in 2016 to assure the victory of Donald Trump in the presidential elections. Reference was made to a meeting in Moscow in January of that year at which Putin supposedly gave the green light to such plans, believing that the mentally unbalanced Trump would do great damage to U.S. society and impair the country’s defense capabilities.

My answer to this request was that the best “debunking” was the name of the single best known author of this article in The Guardian, Luke Harding, a Russia-hater and vicious propagandist of long standing whose credibility as expert on Russia is close to zero.

I have identified above a raison d’état for the Russophobia which controls public policy in the United States. But that is at the level of top policy makers. Below that level and in the broad public the logic is precisely the witch hunt, finger-pointing directed at the Kremlin as the source of all the world’s ills. The separate allegations, such as a supposedly aggressive Russia keen to destroy democratic nations and to raise the fortunes of its own autocracy, do not stand up to any reasonable analysis. What we have here is political science at the kindergarten level, where one and one, if ever totaled, come to four. That no one calls this out is a sign of mass hypnosis or hysteria.

I appreciate that some of my friends’ writings take apart the Russiaphobe fabrications, challenging them technically and otherwise bit by bit. Someone should do that and my comrades in arms do that very well and professionally.

You cannot argue with mass hypnosis. You can keep a diary, write a chronicle that reveals the falseness of the spirit of the age to hopefully enlighten future readers, because, as we hear in another of the main points of Bulgakov’s novel Master and Margarita, “manuscripts do not burn.” That is what I do….

How bad has this mass hypnosis–hysteria in the USA been? Well one piece of evidence that I have not yet revealed until now is that my daily correspondent in 2015 at the time when we co-founded the American Committee for East-West Accord, Steve Cohen, put up the money for the Committee’s foundation and assembled the august board of directors including Reagan’s ambassador to Moscow Jack Matlock for one purpose only: to save his own neck should he be called to testify before a revived Un-American Affairs Committee in Congress, and should he then be thrown into prison. Then there would be this august Board to reach out to the public to get Steve released. Like the Master, it was not Steve Cohen who had schizophrenia but society at large.