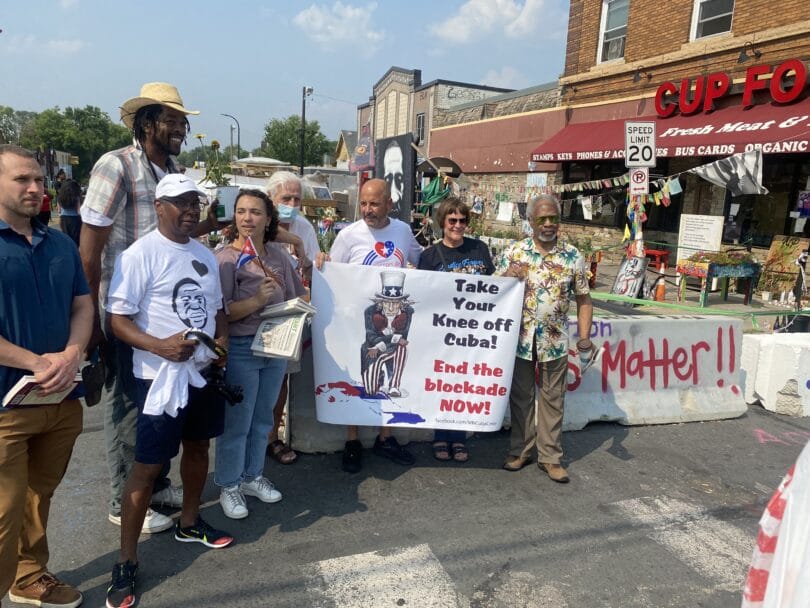 August H. Nimtz (first from right), Carlos Lazo (third from right) of the Puentes de Amor (Bridges of Love) project, and others at an event in Minneapolis at the intersection where George Floyd was assassinated.

Only “niggers” have the right to employ the example of George Floyd to fight oppression.   And, “there are no niggers in Cuba!”  So proclaimed someone who identified himself as a “nigger” to a group of us at George Floyd Square on Saturday afternoon, July 31.

Three of us from the Minnesota Cuba Committee were displaying our new banner that depicts Uncle Sam with his knee on the map of Cuba with the slogan: “Take Your Knee off Cuba!  End the blockade NOW!  minnesotacubacommittee.org.”  We were accompanying visiting Cuban-American activist Carlos Lazo who is leading a national campaign in the U.S. to end Washington’s six-decade long economic embargo of Cuba.  On his way back to hometown Seattle after a successful car caravan protest that began in Miami and ended in Washington, D.C. the weekend of July 25, he wanted to visit the site of Floyd’s murder.

The black man who questioned the presence of our banner initially confronted all three of us who were holding it, a white male, a white female, and me, visibly an African American male.  A racially mixed crowd of a few dozen, including Lazo, was within a twenty-yard radius but not close enough to hear what the three of us were hearing.  His coarse language, the use of the n-word to challenge what we were doing, momentarily rendered us speechless—as intended.  “Is he,” we all wondered, incredulously, “really saying that?”

When our female member and I decided to disengage, seeing no reason to continue the conversation, the confronter persisted with our white male colleague, challenging his presence in what some now call “sacred space.”  To our colleague’s point about the value of engaging in multiracial protests, “I don’t do protests,” he objected. The only legitimate political work, he claimed, our white male member could do in the Square was to “invest” in the confronter’s fledgling potted plant business across the street from where George Floyd took his last breath.

The entire encounter lasted no more than fifteen minutes.  But the nakedness of what we experienced actually blinded us for a day or two to its significance.  Not the first such outrage and, therefore, a teaching opportunity to prevent its repeat.

Most people at the site, whatever their skin color, greeted our banner with either welcome or indifference.  That the only person who objected to our presence was an aspiring entrepreneur is, I argue, telling.  When I first noticed him viewing the banner the expression on his faced looked like, “oh, that’s clever.”  But in hindsight it was a look of envy.  We were, in his eyes, with our dot org contact information on the banner, interlopers into his market.  The George Floyd Square businessman wanted to limit competition. Only “niggers,” his siloed brain said, should reap the benefits of what has now become a national tourist spot.

What the three of us witnessed was a near-text book example of how identity is often used to promote particular interests for personal material gain.  Realizing that he had come late to the profit-making party of the Black Lives Matter industry, our confronter needed, like a smart businessperson, to stand out from the wannabees.  If Benetton’s United Colors or some rip—off, had once been profitable, and someone else owned the BLM logo, “Niggers United” could be the new way to go; certainly, attention-getting as it was for us.

Testing the brand appeal of the slogan on an unsuspecting group of visitors to ground zero for the BLM industry was also ingenious.  That the space has now attracted aspiring capitalists should be no surprise given the logic of capitalist relations of production—the commodification of everything.  Only surprising was the blatant character of the hustle—exactly what it was—breathtaking.  An instance in what has been taking place for more than a year, not only in George Floyd Square, but far beyond.  The logic of Identity politics.

But a larger lesson was on display.  Focusing on what separates us, rather than what unites us—social solidarity—is baked into the DNA of capitalism and, thus, its appeal to someone like the potted plant businessman at the Square.  The particularism of identity politics, most consequentially, aids and abets the divide and rule strategy of capitalist ruling elites—a historical truth if ever there was one.

Luckily, sincere fighters for Black rights and those of any other oppressed layers of society have the example of Malcolm X.  He was always, after he left the self-centered, dog-eat-dog, I got-mine-you-get-yours world of the hustler, looking for allies in struggle—the real reason he broke with the Nation of Islam.  Its narrow nationalism—the same sentiment of the aspiring entrepreneur who confronted us—was increasingly suffocating.  Malcolm came to realize that the division of the population into different “races,” focused on their own separate interests was probably the most effective tool the ruling class employed to stay in power, to prevent the subjects from seeing what they had in common, to overcome their oppression. For those of us who are not content with just railing against all the ways that Black people are oppressed—for some a profitable profession—but are looking for solutions, what to do about it, we should be inspired by Malcolm’s example.  If persuadable, the same for the businessman in George Floyd Square.

There once were “niggers” in Cuba, and they came in all kinds of skin colors.  But after the end of chattel slavery in 1886, Cuba avoided the system of racial segregation in the U.S. known as Jim Crow—the product of the bloody defeat of Radical Reconstruction after the Civil War.  The resistance to the rigid state enforced rules gave birth to the Black nation—what never existed in Cuba.  Why, for that reason, the working class in Cuba in all its skin colors could do in 1959 what its counterpart ninety miles away could not—at least in that moment.  Not for naught did revolutionary socialist Farrell Dobbs write that the overthrow of Radical Reconstruction was a defeat not just for Black Americans: “the entire working class had suffered the worst setback in its history.”1

It was easier, in other words, for Cuban workers to see what they had in common despite their rainbow of skin colors—indispensable in making the first socialist revolution in the Americas: from “niggers” to self-determining human beings for the first time.  No wonder Malcolm enthusiastically welcomed Fidel Castro, despite his “whiteness,” when he visited New York in 1960—in retrospect, the first sign that he was looking beyond the narrow skin color horizons of the Nation of Islam.  From an unreconstructed Black nationalist who once labeled white people as “devils,” to, within four years, a propagandist for revolutionary internationalism—willing to work with anyone for that goal regardless of skin color.  That’s the lesson Malcolm offers—the way forward for emulating the example of Cuba.  No wonder the aspiring capitalist in George Floyd Square wants nothing to do with Cuba.

I write this to give ammunition to all of those who have ever been race-baited in George Floyd Square in whatever kind of way.  Probably the most egregious example I learned of, from a former student, is when “white people” were “invited” to sit in the “circle of shame” near where Floyd was murdered in order to self-flagellate.  This is ammunition as well for anyone who experienced something similar—and hopefully not as outrageous—in any of the multitudinous George Floyd protests elsewhere last spring.  It comes from someone who had the privilege—in its best meaning—to participate in the very first of those protests.  At least five thousand individuals, majority white, twenty-one hours after his murder, assembled in protest in that very space—in the first months, never to be forgotten, of the pandemic lockdown.  We were there together, acting as equals, non-violently, in all of our identities—before the arrival of the identity entrepreneurs.  Also never to be forgotten, however brief, that precious moment.

A rare plea for personal privilege.  In case it matters in the debates with the identity crowd, particularly the American Descendants of Slaves tribe—the latest absurdity of identity politics—and to whom the potted plant businessman might belong, my pedigree: the great grandson of at least four, on my mother’s side, slaves.  Take that—with tongue in cheek—you ADOSers!

The race baiting we experienced at George Floyd Square was clearly not a one-off, especially if we realize that the Square extends far beyond the intersection of Chicago Avenue and 38th Street in south Minneapolis.  It is a space that exists wherever honest anti-police brutality fighters mobilize.  There should be no fear about washing the ‘dirty laundry’ of the progressive cause in public because it may give ammunition to our enemies.  To not admit to and confront such behavior only ensures that it will happen again, with more embarrassing results.  Under an economic system based on the morality of self-interest or, what’s-in-it-for-me, the opportunists and the identity de jour they are peddling are unavoidable.  The goal is to minimize their impact in order to ensure the integrity of the movement.

Only when the toilers see what they have in common, not what differentiates them, does humanity advance—the only answer to that age-old truth about ruling elites and their divide et impera. When the fingers, in other words, stop being fingers in their five different identities, and become a fist.