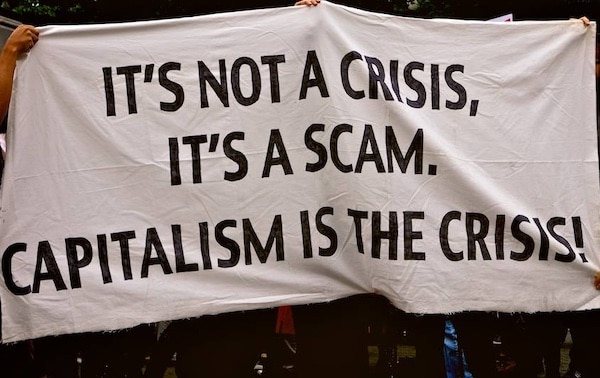 Capitalism jeopardizes the survival of humanity on earth. It reduces the price of the labour of reproducing labour power when it cannot make women do it for free within the family. How can we overcome it while putting the defence of life at the centre of our concerns?

For several months, with the emergence of COVID-19, the imperative need to break with a life-threatening system, put forward in recent years in demonstrations for climate justice, has been embodied very concretely in the life of hundreds of millions of people. The pandemic, linked to the consequences of capitalist globalization, which threatens the climate, biodiversity, and thereby the health of human beings, has ignited the powder keg.

It brutally gave substance to this terrifying image proposed by the Marxist economist Jean-Marie Harribey, according to which world capitalism is a “black hole” in the process of “engulfing” human activities, nature, living things, knowledge, etc. “To engulf, that is to say, to subject everything to the law of profitability, to profit and the accumulation of capital” (“The black hole of capitalism. In order not to be sucked into it, rehabilitate work, institute the commons and socialize money , 2020).

Life at the centre of our concerns

The reasons why women in many countries have gone on strike and have taken to the streets en masse for the past three years, but also the reasons why millions of young people have demonstrated for the climate, have suddenly acquired the force of evidence for many. sectors of the population. These two movements do indeed display certain common concerns by placing “life” at the centre of their struggle: nourishing earth, food, water but also “the social nutrients necessary for a fulfilling life ” (Tithi Bhattacharya).

What is it all about ? Daily care and even more in the event of illness, especially for the elderly, as well as the care and education of children, partly provided within the family; monetary income (salaries, pensions, insurance and various forms of social benefits) making it possible to acquire the essentials of life on the market; public services making education, health, transport and housing accessible to all; free time to talk to each other, to participate, to get involved, to create …

Placing life at the centre thus makes it possible to reappropriate the essential questions raised by ecofeminists of the global South – of this Third Estate of the world which had been the epicentre of the revolution in the post-war decades; a feminism anchored in a popular “territory of life”, and for that reason being the basis of experiences of community life and of anti-imperialist struggles against multinationals (water, mines, oil or agriculture).

It is on the basis of these considerations that comrades were able to write in our fortnightly, on the eve of the women’s/feminist strike of June 2020, that henceforth “revolutionary Marxist feminists had […] found it more relevant to analyze the system according to the capital/life contradiction, encompassing both the preservation of humans and the environment, instead of the traditional capital/labour contradiction. In part, they were right.

Yes, capital is opposed to life because it depletes the two sources of all wealth: human labour and nature. In this sense, the contradiction continues to sharpen between capital and the very conditions of existence of the human species on earth. And by doing so, capitalism could undermine the objective bases of its own sustainability to give rise to an unprecedented form of “barbarism”. Indeed, this mode of production, as Marx underlined, inexorably tends to sow death. Because it “has such ‘good reasons’ for denying the sufferings of the working population around him” , he is no more diverted from his objectives “by the prospect of the decay of humanity and finally by its depopulation than by the possible fall of Earth onto the Sun. (…) After me the flood! This is the motto of every capitalist and of every capitalist nation. Capital therefore does not worry about the length of the worker’s life, if it is not constrained to do so by society ” (Capital , Volume I). And the neoliberal order has accelerated these destructive tendencies.

However, the “old” capital/labour contradiction remains at the heart of the struggle to overthrow capitalism and establish a society of associated producers, reconciled with nature.

Work at the heart of the creation and reproduction of society

The tasks of daily care and education represent an essential sphere of human activity. Within the capitalist world, they cover paid or unpaid activities, within or outside the family framework, which are essential to the reproduction of labour power and its long-term exploitation. With COVID-19 and confinement, the centrality of this work of “social reproduction” has suddenly imposed itself on everyone. So much so that it no longer seems necessary to explain its indispensability for the economy: the essential role of front line carers has earned them hearty applause.

It took effort and courage to keep afloat, at the height of the crisis, public health systems that were severely weakened by budget cuts, education systems that were sorely tested, as well as food distribution and cleaning services, as exposed to view as they are poorly paid, carried out in large part by precarious workers, of whom women and racialized people constitute the vast majority. Not to mention those, working without papers, who lost their jobs without compensation at the start of confinement, nor of all the women whose domestic tasks within the family grew explosively.

This work, essential to the maintenance of life, was celebrated, not without contributing to the shift towards consolidating the traditional image of “woman as the saviour”, wife and mother, as in times of war, in the last century: the celebration of supposed sacrifices. accepted instead of a concrete analysis of living and working conditions, which should be radically called into question. Indeed, what does the notion of social reproduction refer to?

First of all, from the point of view of Capital, to the need to reproduce and reconstitute day after day the labour force from which it derives its profits (the famous surplus value). As early as the 1960s, Marxist feminists developed a concrete analysis of what must be considered as the hidden face of capitalist exploitation, partly subcontracted in the form of poorly paid, even informal, labour. partlycarried out free of charge, mainly by women, within the family.

It is not possible to develop here in all their complexity the rich debates conducted by authors such as Johanna Brenner, Susan Ferguson and Lise Vogel… They have paved the way for a new generation of Marxist feminists. Thus, in a recent book, Social Reproduction Theory. Remapping Class, Recentering Oppression (2017), Tithi Bhattacharya points to a decisive issue: in reality, productive and reproductive work are one. After having defined social reproduction as the set of activities necessary to “produce life, maintain it and guarantee the succession of generations”, she continues: “human labour is at the heart of the creation or reproduction of society as a whole “.

Living work at the heart of social change

The feminist movement, like the climate movement, has seized on the term “strike”, a word steeped in the history of the struggles of “living work”, the only producer of wealth, to sometimes snatch meagre victories from the holders of capital, of “dead labour”, the result of the exploitation of previous generations. In doing so, they always sought, even confusedly, the path to emancipation through collective action. The use of this term is of particular importance for the feminist movement, because it clearly suggests that production and social reproduction are part of a “same capitalist unity” and that, consequently, the class struggle cannot in any way case neglect the sphere of social reproduction in all its complexity.

An idea is taken up in the Draft resolution on the new rise of the women’s movement of the Women’s Commission of the Fourth International: “The use of the strike tool, the centrality of the struggles for social reproduction, the aspiration to understand the processes of production and reproduction as an integrated whole, and its functioning as a vector of politicization and radicalization of the masses, make this new feminist movement in itself a process of developing class consciousness.”1

Marxist feminists thus place human labour at the heart of their reflection, understood in its diversity and its globality, which is always based on the capital/labour contradiction. Indeed, it is in order to bring down the price of labour power that capital buys and increases the surplus value that it derives from it, that capital constantly aims to reduce the cost of its reproduction, borne mainly by women. poorly paid or working for free to produce the services essential to the reconstitution and sustainability of living labour.

Certainly, in the West in particular, many families, as far as they have the means, rely on salaried domestic work, most often poorly paid and informal, which mainly involves immigrant women, racialized, often without legal status, to take care of their children and their elders, as well as housework of all kinds.

These services can also be provided by platforms that hire bogus freelancers and thus dispense with all social and even tax charges, such as UberEats, Deliveroo, etc. In working-class families, who use them less, men take on a larger share of domestic chores, even though women always do more.

To understand the role played by productive and reproductive labour (salaried and non-salaried) in ensuring capitalist accumulation is also to understand that only living labour, because it is the very condition of the profits of a small minority of exploiters, is able to overthrow the yoke of capital, through the collective struggle for its emancipation. Above all, only their immense numbers and their strategic position at the heart of capitalist relations of production can give workers the strength to overthrow this deadly mode of production and found an eco-socialist social order based on the free association of producers, on gender equality and on respect for the essential metabolism between human activities and the natural environment.