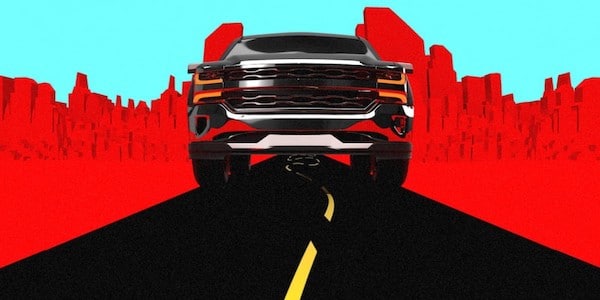 The world’s SUV fleet is growing rapidly and the segment alone account for more emissions growth since 2010 than aviation, shipping, or heavy industry. (Image by Artie61/Blendswap)

Sport utility vehicles (SUVs), known best for their cultural significance among suburban families and upper middle class urban couples, are responsible for more carbon emissions than all but five nations globally. The world’s SUV fleet is growing rapidly and the segment alone accounts for more emissions growth since 2010 than aviation, shipping, or heavy industry. Canada is no exception to this—transport emissions are rising and light-duty trucks, a category that includes SUVs, made up 80 percent of new vehicle sales in 2020.

The conventional answer to the question, “why is this happening?” is consumer demand. Industry responds to what people want—it’s why cars have taken over the Global North (particularly North America) and it’s why, as the middle class grows rapidly in countries like China, private vehicle use is growing rapidly as well.

But that conventional answer doesn’t make much sense. Why would consumers move, en masse, to a type of car that is more expensive, costs more to operate, and is more dangerous for pedestrians, other drivers, and even the driver themselves?

It turns out that the growth of SUV use—and the entrenchment and perpetual growth of personal car ownership more broadly—has a more nuanced explanation that serves as an illustration of how capitalist political economy is fundamentally incompatible with the scale of climate action needed to mitigate emissions.

It’s also something that needs to be addressed, and urgently. There are almost 1.5 billion vehicles on the road today and the growth rate of the global fleet is showing no signs of slowing. Even if electric vehicles came to make up a significant portion of the fleet, their embodied emissions and material use make the prospect of 2.5 billion vehicles by 2050 hard to reconcile, and our current track has SUV-driven emissions growth more or less completely offsetting the adoption of EVs anyway.

The natural place to start is the beginning: cars are a relatively recent addition to cities and they weren’t always a welcome one. In early 20th century North America, streets were filled with pedestrians who coexisted relatively peacefully with trolleys, wagons, and trams. The introduction of cars was catastrophic for other road users—and they fought back, campaigning for speed limiting regulations and working to prevent their intrusion into public urban spaces.

This pushback was, in turn, met with a massive influence campaign from the auto industry. As the historian Peter Norton explains in his book Fighting Traffic, the industry employed a variety of tactics designed to normalize the enclosure of public space for car traffic and to establish car ownership as a cultural norm. Car makers reframed pedestrian deaths by advocating for crosswalks, sidewalks, and other supposedly safety-oriented interventions that served primarily to establish exclusive use of the road itself by personal motor vehicles and to pin the blame for auto-related deaths (a veritable epidemic) on the pedestrians themselves. They even provided “safety curriculums” to schools (a tactic FortisBC is using today to entrench fossil gas infrastructure) and paid to produce TV content painting car ownership as a universal goal and status symbol.

As Giulio Mattioli, a professor of transport planning, and his co-authors wrote in a 2020 study on “The political economy of car dependence,” the social and physical impacts of these campaigns “transform[ed] roads from a commons, accessible to everyone, to a space reserved for car users,” crowding out not just pedestrians and cyclists but even existing forms of public transit, establishing car ownership as not just socially encouraged but required for basic living.

This pattern is most pronounced in the United States and North America broadly, but it’s repeating itself in the Global South today as countries crack down on non-car road uses in an effort to reproduce the image of progress and development created by the North.

This origin story of the automobile industry is a key piece of the puzzle: the use of cars didn’t explode because they were a new technological marvel that improved wellbeing. Private car use exploded because of a concerted campaign by the auto industry to entrench itself both in built infrastructure and in American culture. Car demand was manufactured by the auto industry with the support of the state, ultimately creating a self-reproducing cultural and physical dependence on cars. This is a common pattern in liberal capitalism and it’s one of the reasons the nearly ubiquitous focus of climate policy on consumer-side interventions has failed to make material progress towards reducing global emissions: we’re missing the role that capital plays in manufacturing consumer behaviour.

This story also helps to explain why we’re seeing a global boom in SUV purchases. But to understand why the auto industry chose to create and grow a market for SUVs, we need to look more closely at the dynamics of the industry itself. 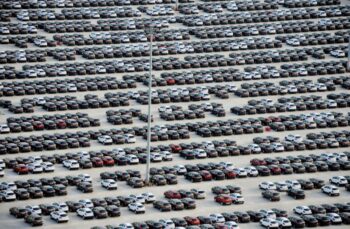 Henry Ford’s famous assembly line facilitated lower cost production, but started the auto industry on a path that eventually led, along with a variety of manufacturing decisions, to a situation where the industry is plagued by high capital costs, low profit margins, and a reliance on overproduction just to stay afloat. Auto manufacturers need to be utilizing roughly 85 percent of their production capacity just to break even, and profit margins have dwindled to less than five percent in recent years. As such, they need to constantly produce vehicles, regardless of the market environment—which leaves them in a situation where they need to create demand for their consistent overproduction.

This requirement sheds some light on the cars the industry decides to produce and market. As Laura Cozzi, Chief Energy Modeler at the International Energy Association, put it: “There is a really big need for car manufacturers to find the margins wherever it is possible, and the SUV segment seems to be one of those places.” New York Times reporter Keith Bradsher warned the world about the aggressive marketing campaign underway to create a market for SUVs in his 2002 book High and Mighty, arguing that—to sell these more dangerous, more polluting, and crucially, higher margin vehicles—the auto industry embarked on a campaign of public influence that built on “America’s love affair with the automobile” (itself a story the industry created in the 1960s). They willfully manufactured a market for vehicles that auto executives openly admitted nobody actually needed or really even wanted—in the face of an escalating climate crisis.

While the American auto industry has been at the centre of this story for the last century and is undoubtedly the primary source for cultural export, the Canadian auto industry is no stranger to manipulating consumers and bears its own responsibility for the proliferation of light-duty trucks in Canada.

According to a 2021 report by Equiterre, the industry spends at least half a billion dollars on advertising and is one of the largest purchasers of digital advertising in the country. The study analyzed a cross-section of auto industry ads in 2019 and 2020 and found that 79 percent of them promote light-duty trucks with the vast majority of those promoting SUVs or so-called “crossovers.” These ads tend to depict domination of nature or outdoor adventure and the majority of them advertise safety, despite the fact that SUVs are unequivocally less safe for everyone involved. As the authors note, there are no federal restrictions on auto advertising in Canada and very little at the provincial level. Manufacturers aren’t even required to display vehicles’ fuel economy.

Complicating matters further, the auto industry has entangled itself with states through its own economic importance, leveraging this relationship to ensure its continued profitability and to protect itself from the threat of more aggressive regulation. The auto industry accounts for five percent of all manufacturing employment and nearly $3 trillion dollars of GDP worldwide, but unlike some industries, its manufacturing processes are highly centralized: individual factories are major regional employers and the industry is dominated by just a handful of major players.

As Mattioli and his co-authors note, from a government perspective, their size, their economic importance, and their precarity combine to make some auto manufacturers “too big to fail,” which in turn leads to government bailouts during economic downturns, and perhaps more crucially, to delicate, preferential treatment when it comes to regulation. SUV sales have grown over almost exactly the same period as global climate ambition and efforts to combat climate change—because of preferential treatment, like the exemption of “light trucks” from U.S. federal fuel economy standards, and because of avoidance of regulation altogether.

This entanglement leads to other forms of state subsidy for the auto industry including road-building and widespread provision of public parking, and it actively discourages other interventions that might ultimately reduce car dependence like investments in public transit. It can also be seen in the way governments have encouraged electrification: subsidies won’t push the industry over the fine edge into insolvency, but EV production mandates might—although they are becoming more common now that manufacturers are ramping up their EV capacity by choice.

The transition to electric vehicles, while certainly welcome, ultimately suffers from the same problems of political economy: an industry that depends not just on perpetual growth, but on extremely high levels of growth artificially manufactured through consumer manipulation (and with no regard for the public health or environmental consequences of that manipulation, as we’ve seen with SUVs), can never be sustainable. As Mattioli and his colleagues put it, “it is the automobile industry as a whole that should be seen as unsustainable, rather than specific products or technologies as is often claimed.”

Unfortunately, the picture painted here is not one with clear answers: the auto industry has so heavily entrenched itself in culture, in the built environment, and in politics, that anything other than staying the course—with a gentle smattering of electrification—appears impossible. But this is a similar problem to what we face across the board: climate action at a meaningful scale requires us to transform society on a rapid timeline. That means, as a first step, addressing the ways corporations manipulate consumer behaviour to maximize profit.

Despite what certain economists insist, demand is not some exogenous process of human nature—it’s manufactured, and we’ve allowed the same corporations that manufacture goods free rein to manipulate the public and manufacture demand for those goods. It also means re-empowering the state to challenge corporate power; and it absolutely means recognizing, understanding, and accounting for the way unsustainable systems of production are embedded at the core of our economies.

Ending the auto industry, the oil industry, or any other fundamentally unsustainable industry is easy enough to campaign for, but it’s much harder to accomplish because of how embedded within our systems of governance and ways of living these industries are. Emissions reductions really do require the implosion of precarious industries like the automotive sector, but the direct and indirect impacts of those implosions need to be understood and planned for: workers in those industries deserve a future just as much as the rest of us.

Nick Gottlieb is a climate writer based in Squamish, BC and the author of the newsletter Sacred Headwaters. His work focuses on understanding the power dynamics driving today’s interrelated crises and exploring how they can be overcome.