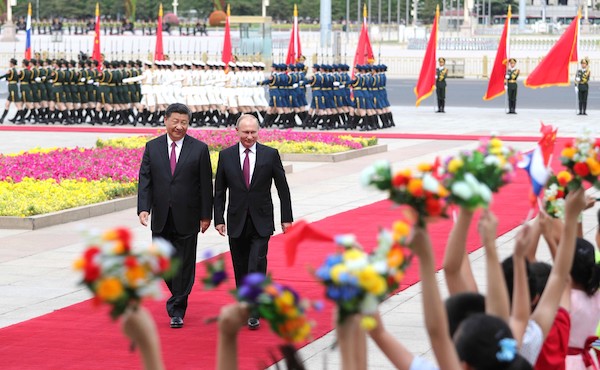 The President of Russia arrived in China on a state visit. (Photo: Wikimedia Commons)

Russian President Vladimir Putin’s well choreographed decision yesterday to recognize the independence of the pro-Russian Ukrainian provinces of Donetsk and Luhansk points to two key realities: (1) Putin despairs of persuading U.S. allies, Germany and France, to press Ukraine to honor its commitments under the Minsk accords that provide for regional autonomy as well as a ceasefire; and (2) Putin feels assured of very strong backing from China (as long as he is not stupid enough to invade Ukraine).

What about this China factor? Why do Western pundits/savants pay so little heed to this game-changer? It should not require my half-century of studying/reporting on Russia-China relations to notice that China and Russia have never been so strategically close as now. Putin and Xi have done their part to demonstrate that. Why cannot most Western pundits and savants see it and recognize the implications?

There are, happily, notable exceptions–for example, Edward Wong’s Bond Between China and Russia Alarms U.S. and Europe Amid Ukraine Crisis.

Wong writes of Chinese Foreign Minister Wang Yi’s speech on Feb. 21 in Munich: “It was the latest instance of what Western officials say is China taking a bold new swing at the United States and its allies by wading into European security issues to explicitly back Russia.” Wong includes quotes from a PR person, Pentagon spokesman John Kirby, and a true expert on China, former prime minister of Australia Kevin Rudd.

China’s support for Russia is deeply alarming, and, frankly, even more destabilizing to the security situation in Europe.

China’s explicitly pro-Russian position on European security is new and significant and quite a radical departure from the past.

Kevin Rudd is right, of course; and it’s nice to know that the Pentagon, too, is aware. Crazed as the generals and admirals have long shown themselves to be, it is questionable whether even they would want to risk war on two fronts with major adversaries–for another star on their shoulder.

I recall Amb. Chas Freeman telling me last December, “It is clear that the Sino-Russian entente is expanding under the pressure of U.S. threats to both. Nothing will happen on either Taiwan or Ukraine without coordination between Beijing and Moscow. …. I shared this in Biden-Putin Talk Tuesday With Xi in the Wings.

That nothing will happen on either Ukraine or Taiwan without coordination between Beijing and Moscow seems to be key to understanding why Putin is feeling his oats. Yesterday, Chas further reminded me that “China agrees with Russia that the U.S. global sphere of influence needs rollback. It does not agree that Ukraine should be invaded, occupied, or annexed. Ironically, China is this century’s citadel of Westphalianism.”

Is this not another reason why Putin would not invade Ukraine? In my view, if Putin did decide to do such a stupid thing, it is a given that he would check with Xi first, and that Xi would respond with a loud NYET in Chinese.

China on the Spot?

In his video-linked speech to the Munich Security Conference, Chinese Foreign Minister Wang Yi made clear China’s support for Russia’s position on NATO’s eastward expansion, asking, “Will this be conducive to peace and stability in Europe?” Here, though, is where it might get a bit sticky: asked about Ukraine, Wang Yi restated China’s principled position that the sovereignty, independence and territorial integrity of all countries should be respected and safeguarded, adding that the only viable way to resolve the Ukraine issue is to return to the Minsk-2 agreement. He ended by expressing the pious hope that all parties will pursue dialogue and consultation to find a solution.

What about Putin’s recognition yesterday of the independence of Donetsk and Luhansk, and sending in Russian troops? I’ll bet Putin gave Xi advance notice of Moscow’s decision, but I do not think the Russian president sought Xi’s approval, much less permission. How the Chinese will react is anyone’s guess. Mine is that they will choose to finesse the “independence issue” as they have been finessing the annexation of Crimea–neither condoning nor criticizing it. Moreover, I do not think Putin would have moved on Donetsk or Luhansk without some tacit assurance that there would be no risk of damage to what has become the world’s most potent “alliance”–after NATO, of course.

Jack just sent me these:

It seems to me that recognition of the two breakaway republics represent Putin’s current aim. That, plus negotiations that may induce the U.S. to remove missile defense installations from EE. (This is his real sore point, and one that would be rational to meet.) …

I could not and cannot imagine that Putin would be so stupid as to invade Ukraine, bomb its cities, etc., though obviously Russia has the capability, even without any exercises on the border. The U.S. also has the capability of attacking every country in the world without warning, so one must distinguish between capability and intent.

Since Putin is quite aware of our intelligence capabilities, he is quite aware that we will be watching and listening. I can imagine the hilarious laughter of Putin’s inner circle every time some useful idiot proclaimed that Russia would be attacking any time now and that we would do crushing sanctions if Russia did–but only if it did!

Zelensky’s steadfast refusal to implement Minsk II gives Putin a dandy excuse to say that this left him no alternative to recognition of the Donetsk and Luhansk entities. He is a judo master, whatever else one might say.”

Ray McGovern works with Tell the Word, a publishing arm of the ecumenical Church of the Saviour in inner-city Washington. His 27-year career as a CIA analyst includes serving as Chief of the Soviet Foreign Policy Branch and preparer/briefer of the President’s Daily Brief. He is co-founder of Veteran Intelligence Professionals for Sanity (VIPS).

Ray McGovern works with Tell the Word, the publishing arm of the ecumenical Church of the Saviour in inner-city Washington. In the Sixties he served as an infantry/intelligence officer and then became a CIA analyst for the next 27 years. He is on the Steering Group of Veteran Intelligence Professionals for Sanity (VIPS).