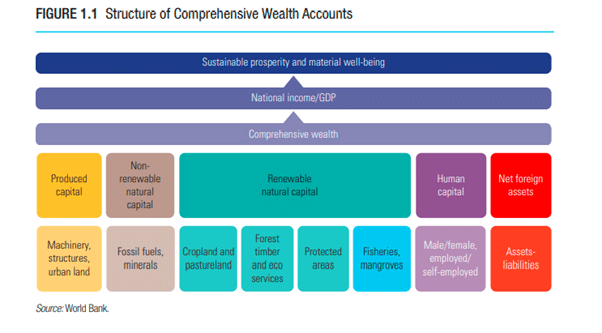 Marx’s first sentence in Capital Volume One is: “The wealth of those societies in which the capitalist mode of production prevails, presents itself as an “immense accumulation of commodities”, its unit being a single commodity.” (Moore and Aveling translation).  So, from the beginning, Marx makes a distinction between wealth in societies and how it appears in the capitalist mode of production.  And in Grundrisse, Marx explains what he means by ‘wealth’:

when the limited bourgeois form is stripped away, what is wealth other than the universality of human needs, capacities, pleasures, productive forces etc., created through universal exchange? The full development of human mastery over the forces of nature, those of so-called nature as well as of humanity’s own nature? (p488).

Under capitalism, the meaning and substance of wealth is restricted to the value of commodities produced for sale and profit, accumulated as capital and measured in money -the universal measure of human labour time involved in commodity production.  This meaning of wealth excludes human social needs as well as the impact on wealth from environmental degradation, pollution, exploitation and inequalities.  These are not accounted for the capitalist accumulation of private wealth.  Because of that, capitalist economies are not only destructive and wasteful; capitalism is unfit for the purpose of delivering real wealth to humanity.

Global warming, climate change, environmental disasters have become so serious that the contradiction between capital and wealth accumulation has become obvious.  This has forced even mainstream economics to consider ways of measuring ‘wealth’ as opposed to the production of value (GDP) and its accumulation into capital.

Recently, the World Bank has tried to measure wealth.  In its latest report, The changing wealth of nations 2021, it provides an analysis of the world’s wealth accounts spanning 146 countries, with annual data from 1995 to 2018. It also contains the widest set of assets covered so far, including the value of human capital broken down by gender, as well as many different forms of natural capital, spanning minerals, fossil fuels, forests, mangroves, marine fisheries, and more.  Even so, the Bank’s analysis remains inadequate, leaving out the impact of climate change, the social impact of carbon emissions from fossil fuels and, as the report adds, “economic sustainability is not the same as human well-being.”

Wealth (as the Bank defines it – MR), like GDP, “is intended to represent material well-being, not broader human well-being.”  The Bank considers the contradiction.  While “wealth accounting—the balance sheet for a country—captures the value of all the assets that generate income and support human well-being. Gross domestic product (GDP) indicates how much monetary income or output a country creates in a year; wealth indicates the value of the underlying national assets and therefore the prospects for maintaining and increasing that income over the long term.”  So the Bank considers GDP and wealth as “complementary indicators for measuring economic performance and provide a fuller picture when evaluated together. By monitoring trends in wealth, it is possible to see whether GDP growth is achieved by building capital assets, which is sustainable in the long run, or by liquidating assets, which is not.  Wealth should be used alongside GDP to provide a means of monitoring the sustainability of economic development.”  If rising GDP today comes at the expense of declining wealth per capita, then prosperity will be unsustainable. Economic growth will erode its own base.  So the measure of the change in wealth per capita over time is perhaps the most important metric to consider in addition to GDP and, according to the Bank, it provides an actionable way to track sustainability.

And what does the Bank find on that?  That “our material well-being is under threat: from unsustainable exploitation of nature, from mismanagement and mispricing of the assets that make up national wealth, and from a lack of collective action at local, national, and regional levels.” Despite a global expansion in total wealth per capita between 1995 and 2018, many countries are on an unsustainable development path because their natural, human, or produced capital is being run down. In countries where GDP growth is being achieved by consuming or degrading assets over time, for example by overfishing or soil degradation, total wealth is declining.

The performance of lower middle-income countries was better, increasing in share from 5 to 7 percent by 2018. But this cohort only achieved this because of one country: China. China’s share of global total wealth transformed from a modest 7 percent in 1995 to 21 percent by 2018. The Bank concludes “This means that low-income countries are falling further behind the rest of the world, creating a significant divergence in global wealth per person.”  This further proof that there is no ‘convergence’ between rich and poor countries globally and that imperialism is still with us.

That’s the share of global wealth (as defined).  But more important is what happened to wealth per person globally?  On a per capita basis, average wealth grew from US$111,174 to US$160,167. This represents a real rate of growth of 2 percent per year. But 26 countries saw a decline or stagnation in per capita wealth as population growth outpaced net growth in asset value, especially in Sub-Saharan Africa. 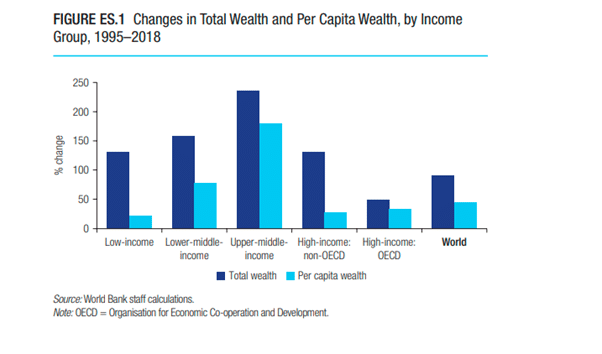 Large disparities in per capita wealth around the world persist. On average, an individual in an OECD country was implicitly endowed with US$621,278 in wealth at birth in 2018. For an individual born in a low-income country, the estimate was just US$11,462. I did a little exercise on comparing wealth per capita between various countries using the World Bank results. 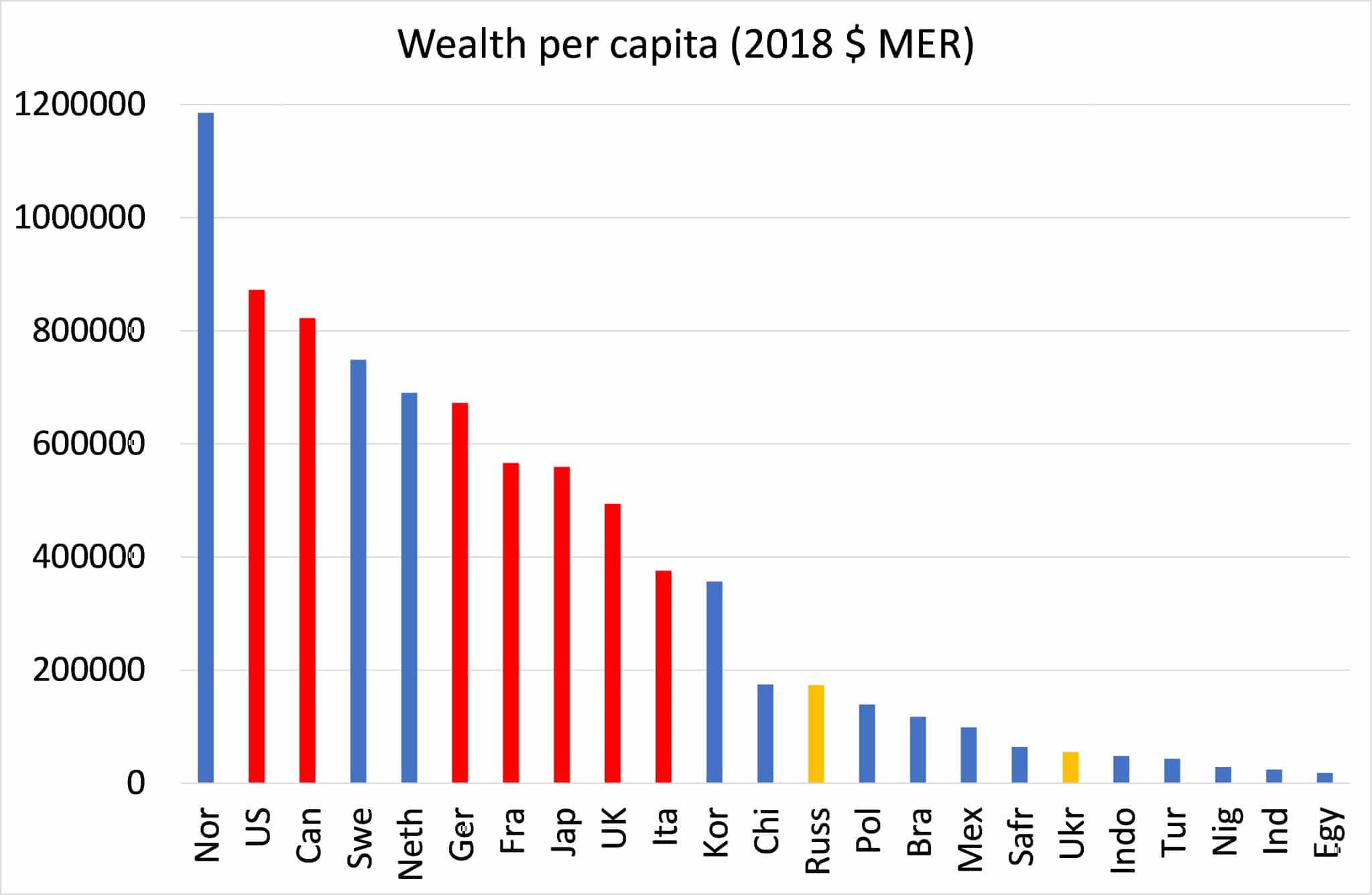 The measure above is in market dollar exchange rates (MER).  The World Bank also measures wealth per capita in purchasing power parities (PPP), which supposedly provides a better measure of what can be purchased in each country with the wealth available.  This produces higher wealth per capita results for some poorer nations.  But it does not significantly alter the overall trends.  So I have not done a PPP comparison (although the report does).  Also, the MER measure is, in my view, a better international comparison measure of the economic strengths of countries relative to the US.

When we look at the composition of wealth as defined by the Bank (natural resources; human labour power; means of production and net financial assets), there are more revealing facts.  Human capital remains the most important component of wealth. Its share in total wealth increased from 62 percent in 1995 to 64 percent in 2018. Produced capital’s share decreased from 32 to 31 percent.  But note that produced capital (means of production) is largest as a share of wealth in the advanced capitalist economies. Natural capital represented just 6 percent of total global wealth in 1995 and 2018. This share was equally divided between renewable and non-renewable natural capital (3 percent each) in 2018 at the global level. 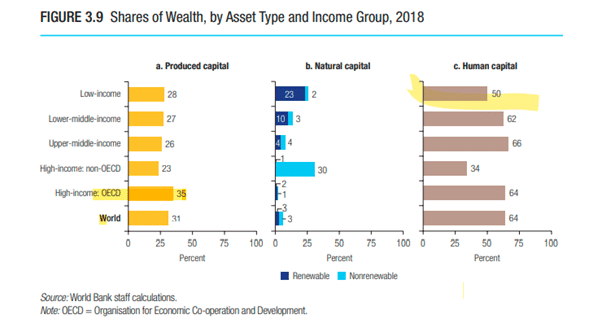 Because low-income countries have so few other assets, proportionately, natural assets such as land and ecosystems are crucial for them, comprising around 23 percent of their total wealth. ‘Blue’ natural capital (mangroves and marine capture fisheries) are a critical part of total wealth for some countries.  But blue natural capital fell by half from 1995 to 2018, as the value of fisheries collapsed by 83 percent.  The main reason for the decline in the value of fisheries is a physical depletion of fish stocks “due to the failure to coordinate fishing activities between countries and the private sector.”

Low- and middle-income countries, where land accounts (forests, protected areas, and agricultural lands) are a large component of total wealth, have seen declining forest wealth but rising agricultural wealth. While forest wealth (timber plus ecosystem services) per capita decreased by 8 percent between 1995 and 2018, driven by population growth and a loss of forest area, agricultural land wealth (cropland plus pastureland) per capita has increased by 9 percent due to area expansion and increasing value per square kilometre.  Industrial farming is replacing natural resources.

The Bank measures ‘human capital’ (as the Bank wants to call it in true capitalist fashion) as the value of earnings over a person’s lifetime.  Self-employed workers account for 13 percent of global human capital, but a much larger share of the total in many low-income countries, where the agriculture sector and informal employment are significant. The slower annual wage growth in high-income countries (roughly 1 percent), combined with the aging of the labour force, reduces their share of global human capital. Meanwhile, higher rates of wage growth in some middle-income countries such as China (up to 4 percent) increases their relative share.

However, the World Bank admits that “Although the full, long-lasting effects of the COVID-19 pandemic are still unknown, the resulting economic downturn and associated unemployment and loss of earnings have already set back the long-term progress in poverty reduction, especially in low-income countries.” Sub-Saharan Africa and South Asia suffered the greatest setbacks, losing 15 and 7 percent of human capital.

There are huge gaps in the World Bank’s measure of ‘wealth’.  It does not include the value of carbon retention or sequestration services as part of wealth embedded in biological ecosystems (for example, forests, soils, and oceans). Nor does it subtract the social cost of carbon from fossil fuels.

How can the wealth divergences globally be closed and how can the growing disaster of climate change and environmental degradation be averted?  The World Bank’s answer is the conventional mainstream one.  Having told us that the production of commodities for the market is not a proper reflection of wealth in society, it proceeds to offer market solutions to this contradiction. “Going forward, policy interventions—such as carbon taxes and payments for ecosystems services—are urgently needed to make market prices explicitly reflect the social cost of carbon dioxide emissions and the value of global climate regulation services provided by nature.”  And it promotes the private sector as the funding source of policy action, arguing for “major progress on incorporating ESG considerations into investing choices.”  This is ironic when the evidence of the failure of ‘ethical investing’ is growing by the day.

The World Bank sums up the issue.  “Natural and human capital are therefore at the core of our prosperity, but few of these assets are accounted for in the national balance sheets and hence appear invisible or worthless to policy makers. When we think of wealth, most of us might think about financial assets, or companies, computers, and cars. But what about forests, mangroves, water, fish, or clean air? What about healthy people and their capacity for productive work? And can we cooperate when the challenges in managing our prosperity transcend national boundaries?”