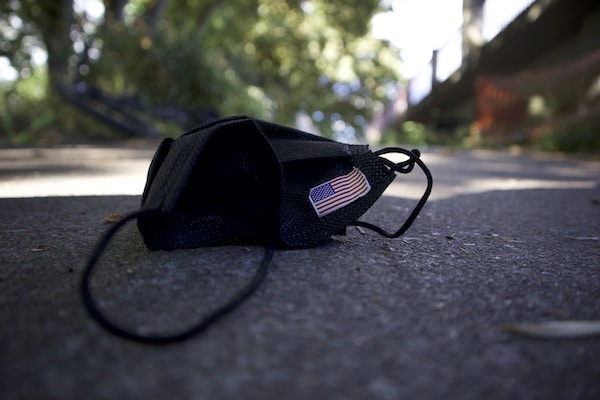 At the end of May, as I was waiting to board a flight from Newark to Geneva, I overheard a high-decibel monologue being delivered by an older American businessman to a fellow passenger of undetermined nationality. The topic of the monologue was the coronavirus, which the American’s daughter–a nurse in New York–had just contracted for the first time since the onset of the pandemic in 2020.

The moral of the story, according to the American, was that “everybody’s acting like Corona is done, but it’s not”. Ironically, his own insight did not inspire him to don a face mask either in the airport or on the airplane.

I had just flown from El Salvador to the United States to visit my parents in Kentucky, and from Geneva would continue on to Istanbul and Beirut. The trajectory provided a swift reintroduction to a suddenly mask-less world–in which everyone seemed to be over the pandemic despite the fact that the pandemic was very much not over.

On April 18, a U.S. judge in Florida overturned the federal mask mandate for airlines and public transportation–a mere five days after the Joe Biden administration had extended the mask requirement on account of soaring COVID-19 rates, as the U.S. racked up tens of thousands of new cases and hundreds of deaths per day. By late May, the U.S. was holding steady in first place for most coronavirus deaths worldwide, and daily averages of new infections were well over 100,000–these being only the officially documented cases, meaning that the actual numbers were presumably much higher.

Already in February, the U.S. Centers for Disease Control and Prevention (CDC) had determined that masking indoors was no longer necessary in most of the country. That same month, coincidentally, Impact Research–defined by NBC News as “Biden’s polling firm”–had warned in a memo that Americans were “worn out” from the pandemic, and that Democrats needed to “declare the crisis phase of COVID over and push for feeling and acting more normal”.

According to the memo, Democrats risked suffering at the ballot box if they did not “stop talking about restrictions” and “prioritis[ing] COVID precautions”. It was now time to “fully enter the rebuilding phase that comes after any war”, lest Americans think the country’s leaders were “out of touch with their daily realities”.

To be sure, much of American “reality” consists of pretending that we are not rapidly self-destructing in a corporate-capitalist war on humanity and the planet. But, hey, that’s no reason not to feel and act normal.

In a recent email to me, evolutionary biologist Rob Wallace–author of Dead Epidemiologists: On the origins of COVID-19 –remarked that pandemics, like climate change, are indicators of “systemic rot”. And indeed, the ruling class response to the pandemic has only further exposed the rot of a system in which COVID deaths are seen as a “price worth paying to return markets back to full throttle”–particularly if those deaths occur disproportionately among “the poorer and the browner” sectors of the population.

Wallace, who was also the protagonist of a 2021 front-page article in The Nation–which described him as the man who “predicted the pandemic”–stressed to me that “study after study has shown jurisdictions with mask mandates host fewer COVID-19 deaths during ongoing outbreaks than areas without mandates.”

Regarding public distaste for masking, he opined pointedly:

And yet death does not suck so much for capitalism, which, Wallace stressed, can easily “survive any resulting virus that kills a billion people”. Obviously, though, it would be impolite for the politico-corporate establishment to come right out and say that profit is more important than human life. The termination of mask mandates and other restrictions is thus cast as part of the “rebuilding phase” following the “COVID war”–to borrow Impact Research’s terminology–rather than merely a component of the neoliberal war on public health.

Masks, of course, also occupy a special place in U.S. sociopathy, and over the course of the pandemic have prompted semi-anthropological investigations by a range of international media outlets including the BBC, which in July 2020 tackled the question:

Why are Americans so angry about masks?

Last year, my father was on the receiving end of some of this rage when he committed the error of bicycling while masked in Louisville, Kentucky, eliciting an intervention by a concerned citizen in a pickup truck who bellowed at him to remove the accessory because he looked like “a f****** idiot”.

Many Americans view masks as a violation of their personal “freedom”–the same “freedom” that has enabled the U.S. to become the most maniacally armed nation in the world and that has resulted in, inter alia, regular mass shootings of schoolchildren. The U.S. version of freedom is a plague unto itself, casting as it does individually and collectively catastrophic phenomena in a positive light that ultimately benefits–who else?–the rich.

American exceptionalism was certainly on display on May 1, 2020, when a 43-year-old security guard at a Family Dollar store in Michigan was shot and killed after informing a customer that her child was required to wear a face mask to enter the establishment. Anyway, the revocation of mask mandates has perhaps at least somewhat assuaged concerns among the U.S. populace that a “communist dictatorship” is being imposed on the nation.

Never mind that communist Cuba was able to lift its own mask mandate on May 31, 2022, after vaccinating nearly 95 percent of its people–according to Reuters–with homegrown Cuban vaccines, and registering only two COVID deaths the whole month. I spent February 2022 in Havana, and witnessed the rigorous and unquestioning respect for public health efforts in a society where preventive medicine and a focus on collective wellbeing, rather than elite despotism, have produced impressive health achievements–despite Cuba’s existence under punitive U.S. embargo for more than six decades.

In the U.S., on the other hand, Wallace commented to me that “from the far right to a libertarian left, ending mask mandates is embraced as a blow against communitarianism”–which amounts to a blow against the “very notion of society”. So much for the future.

Europe, too, has fallen into line, suspending mask requirements for air travel as of May 16. As CNBC put it in an article published that same day:

There are hopes that the removal of mask-wearing mandates will be a shot in the arm to an aviation and tourism industry hit hard over the last two years.

After all, industrial health is of paramount concern. If only there were a vaccine against capitalism.

Wallace emphasises that new COVID sub-variants are evolving on an almost weekly basis, in part an outcome of “ending these very mask mandates”. On my flight from Louisville to Newark, I counted maybe five masks; ditto for the flight from Geneva to Istanbul, where, upon my arrival, an Indian friend staying in the city announced that I was the first masked person he had seen “in weeks”.

Now, as mask-lessness becomes contagious and normalised in a world that is far from “normal”–in which 15 million people have already been killed by an entirely preventable pandemic–dying still sucks.

Belen Fernandez is the author of Checkpoint Zipolite: Quarantine in a Small Place (OR Books, 2021), Exile: Rejecting America and Finding the World (OR Books, 2019), Martyrs Never Die: Travels through South Lebanon (Warscapes, 2016), and The Imperial Messenger: Thomas Friedman at Work (Verso, 2011). She is a contributing editor at Jacobin Magazine, and has written for the New York Times, the London Review of Books blog, Current Affairs, and Middle East Eye, among numerous other publications.