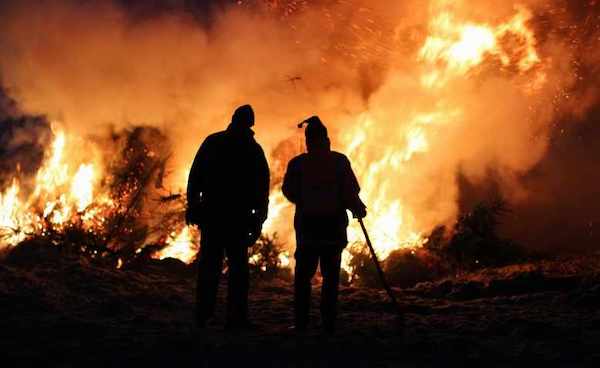 Has there ever been such a discrepancy between the failings of government and the dire crisis facing society? It is hard to think of one in modern times. The neoliberal system which brought us deregulation, globalisation, growth in inequality, the destruction of old industries, the spread of the market to every corner of the world, is now bringing us climate disaster, economic crisis, food and fuel inflation and shortages, pandemic, and war.

The present heatwave in Europe is a sign of things to come, with record temperatures in Britain, dangerously high ones in Portugal and Spain, droughts, and forest fires. These fires are also affecting north America and parts of Africa. The Covid-19 epidemic is still a major health issue worldwide. There is serious talk of a global recession. This will be exacerbated by the cost-of-living crisis which is already hitting spending by working-class people who are cutting back on the use of electricity and gas and spending less money on food. There are regular and extremely costly international summits, including Cop26 and G7/20 meetings, but far from beginning to deal with any of these major problems the leaders of the richest countries in the world continue to collectively fiddle while the planet burns and while the vast majority of its population gets worse off.

Joe Biden’s response to the rise in petrol prices which is causing political difficulties for him in the car-dependent U.S., is to go to Saudi Arabia and make deals with the odious regime including its leader Prince Mohammad bin Salman. A man Biden claimed he would not shake hands with, given bin Salman’s involvement in the brutal murder of journalist Jamal Khashoggi, he settled for a fist bump instead. No doubt the Saudis can live with that, alongside more oil sales and more promised weapons for helping fight the war in Yemen. Meanwhile in Germany, where the fuel crisis and sanctions on Russia are hitting particularly hard, politicians are seriously discussing increasing dependence on fossil fuels to compensate.

It is becoming increasingly obvious to a growing number of people that the social relations of capitalism are the main barrier to solving any of these crises. The profit motive and free market system mean there is no serious challenge to the right of business to pollute, from the airlines to construction industry, to the failure to provide affordable alternatives to private and commercial road transport.

This is why we are seeing growing eruptions of anger and struggle in different part of the world, notably in Sri Lanka where mass protests, very much linked to the food and fuel shortages, inflation and power cuts of recent months, have got rid of the president. The impact of escalating costs and shortages in the winter months particularly, when workers will find their wages simply don’t cover their ‘costs of reproduction’ as Marx termed it.

In Britain there are particular aspects of this crisis. The decline of public services over decades of privatisation has become acute after 12 years of Tory rule. The underfunding in the NHS means that hospitals, the GP service and ambulances are now at a point of near collapse. In the private sector, the problems of supply following the Covid-19 lockdowns, and the shortage of labour in many industries is leading to cancelled flights, an inability to take driving tests or order passports, restaurant closures and transport delays. The Union is looking precarious with renewed demands from the Scottish government for an independence referendum and the continued instability round the north of Ireland and the failure of the Unionists to accept May’s election result.

Already, inflation and uncertainty about future costs is leading to a downturn in spending, while rents and house prices climb ever higher. Wages are already at a lower level in real terms than in 2008, and Britain’s historic problems of low wages and low productivity are putting it at an ever-greater disadvantage compared to its rivals France and Germany.

The disgraced Boris Johnson decided to spend the weekend organising a ‘farewell party’ at Chequers and to embellish his list of nominees for the House of Lords. One could argue that the appalling failures of Boris Johnson’s government, and the parlous state of his would-be replacements as Tory leader and therefore prime minister, are not just a reflection of their own politics, but also of the longer-term decline of British capital. Decades where the ruling class has got things largely its own way and have faced little opposition from an organised working class has allowed the cuts and privatisations, the accumulation of previously undreamt-of wealth alongside savage attacks on the living standards of the poorest.

That is changing now. The pandemic has demonstrated the need for well-funded public services, for decent wages and conditions to keep key workers, and the need to reduce levels of inequality which were so highlighted during lockdown and after. The trade unions are engaged in a series of strikes over the coming months which are likely to be at least partly successful in the context of high inflation and a very tight labour market. That is already altering the balance of class forces in our favour. The role of the rail unions has already thrust them to the centre of political debate, and they are being followed by communications workers, civil servants, teachers, lecturers and many more.

It is a situation that the Tory candidates neither know nor understand. It is quite incredible that, given all that is facing British capitalism, let alone the discontent among working class people, they are so bad. They all burnish their Brexit credentials to appeal to the completely unrepresentative electorate which is the Tory membership. They all talk about tax cuts rather than any other method–food and fuel subsidies, increase in pensions and benefits, decent wage rises, taxes on the rich and corporations, controls on rents, cheaper and better public transport–which might benefit workers more. And they all want to engage in ‘culture wars’ which are of concern to a relatively small number of bigots. And they all love posing in front of union jacks and banging the drum for war.

They have nothing substantial to say about the cost-of-living crisis which is the major talking point of working-class people everywhere. Whoever gets elected out of this dire process, we will have a major fight on our hands. But they are very weak, and the working-class movement is growing in strength.

There are some years when great upheavals–and even revolutions – develop internationally as events force people to fight back. This year is unfolding against a background of climate crisis, war, food shortages. We are likely to see many more challenges to the system to come. Our rulers certainly have no answers to these multiple crises–in fact they exacerbate many of them precisely because they won’t challenge the power of capital. If they have no answers, socialists certainly do. And we need to keep putting these loud and clear.