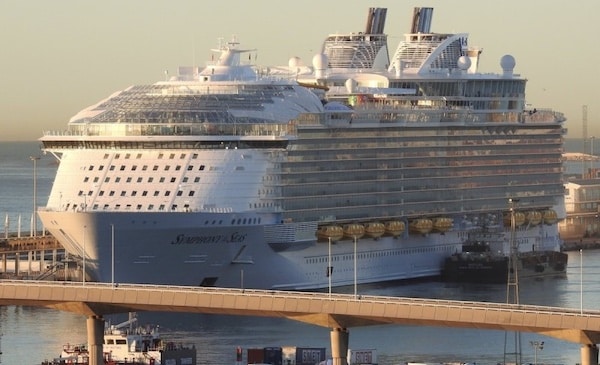 Symphony of the Seas, an Oasis-class cruise ship owned and operated by Royal Caribbean International. It was the largest cruise ship in the world by gross tonnage when built in 2018. Photo by roli_B/Flickr.

Now that the grandees of global capitalism have decided to act as if the pandemic were over, every effort is being made to restore previous norms of mass consumption. It’s not surprising, then, that a major push is underway to persuade people to head off to sea in cruise ships. It is true of course, that these vessels have had more than their share of COVID outbreaks and that they continue to pose a threat in this regard but the dominant “open for business” agenda cares little for such considerations.

As the impact of pandemic containment measures abated, it was expected that, by the end of last year, worldwide ocean cruise capacity would encompass 323 ships carrying 581,200 passengers. In the U.S. alone, revenue generated by cruises is estimated at $37 billion.

It is very easy to regard luxury cruises as an expression of capitalism’s worst instincts. They involve crass consumerism and appalling levels of environmental degradation. They also reinforce the inequalities and distorted development that underlie global tourism. At the same time, the backdrop to the recreational setting they provide is the intensely exploitative “sweatship,” with its dreadful working conditions. The various elements of this pernicious mix are worth considering.

The recreational cruise constitutes a particularly destructive and entirely needless assault on the natural world. “A single large cruise ship will emit over five tonnes of NOX emissions, and 450kg of ultrafine particles a day,” German air pollution expert Axel Friedrich told The Guardian. According to Daniel Rieger, of the German environment group Nabu, cited in the same Guardian article, “One cruise ship emits as many air pollutants as five million cars going the same distance.” Dr. Bryan Comer of the International Council on Clean Transportation has shown that “even the most efficient cruise ships emit more carbon dioxide per passenger kilometer (CO2/pax-km) than a passenger jet.”

In an opinion piece last year, Kim Heacox, a former Alaskan Park ranger who is very familiar with the ecological impact of cruise ships, concluded that “If anything should change after Covid-19 and not go back to normal, it’s cruise ships and the voracious industry that operates them.” He points to the enormous size of the vessels that are each bringing thousands of passengers to visit the Alaskan coastline. “They don’t look like ships any more. They look like the boxes the ships came in, huge floating milk cartons⁠—ponderous and white.” One ship is now under construction that will carry 10,000 passengers and include a theme park, complete with a roller coaster.

The same cruise ships that visit Alaskan ports of call pass along the British Columbia coastline, treating the area as a toilet bowl in the process: “More than 31bn litres (8.5bn U.S. gallons) a year of pollution is estimated to be discharged off the west coast of Canada by cruise ships on their way to and from Alaska.” Huge quantities of toxic sewage are dumped into the sea.

But the worst pollution comes from the scrubbers that clean exhaust gases such as sulphur oxide and nitrogen oxide, as well as particulates, from the heavy bunker oil used as marine fuel. This means that just one cruise ship can shed roughly 200 million litres of waste as it sails the BC coast. As might be expected, this kind of destructive behaviour is abetted by weak regulatory systems and even weaker enforcement mechanisms. Ross Klein points to one of the major cruise operators, Carnival Corporation, which was found to be discharging plastic into the oceans. It received a $40 million fine in 2016. But it went ahead and committed another 800 offences incurring another $20 million in fines. “That’s a corporation that earns over $4 billion a year tax free. That’s not even a wrap on the knuckles,” Klein points out.

Cruises generate revenue and economic activity, in however distorted and harmful a form, in the places they select as ports of call. Nonetheless, the damage they do has provoked significant opposition. The full scale resumption of cruise activity after COVID restrictions were lifted was met by angry protests in both Victoria and Seattle as well as in Italy, Spain, Norway and Germany.

To properly assess the impact of cruises on the places they visit, it is necessary to consider the broader context of global inequality. Cruise operators confront poor countries as predators, seeking to extract profits while offering the most dubious economic benefits in return. During the winter months, over half the world’s cruise ships operate in Caribbean waters. In an article for Forbes, James Ellsmoor, a young entrepreneur specializing in sustainable development in remote and island communities notes:

The industry has been accused of using its size to bully local governments into negotiating more cruise-friendly contracts that constrain the local economy.

Efforts are underway to tilt the balance somewhat and ensure fairer contracts between cruise companies and their Caribbean destinations but the exploitative nature of the relationship won’t be remedied by tinkering and polite pressure. The cruise industry is a major component of a system of global tourism that rests on exploitation and that distorts the economic development of poor countries. 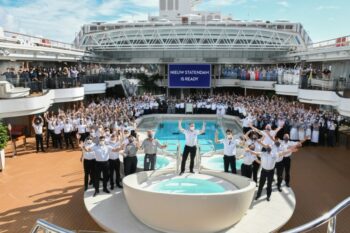 Tourist ventures may mean that local elites take a cut of the profits and states generate some revenue, but the very idea of shaping the economy of poor countries suffering the legacy of colonial rule around the provision of recreation for visitors from rich countries is a travesty. The extent to which tourism functions as a component of global imperialism can be seen from studies showing that “up to 80 percent of every dollar spent by tourists goes to the global companies that own Caribbean resorts and cruises.”

Cruise ships are, of course, places of work and, as such, they reflect the reordering of the global workforce that has taken place during the neoliberal decades. Almost 20 years ago, War on Want and the International Transport Workers’ Federation issued a report which concluded that cruise ships were a story of “apartheid at sea” below deck in which “workers from poor countries are suffering conditions reminiscent of Asia’s export processing zones.” It was this report that coined the term “sweatships.”

A more recent examination of the role of cruise operators as employers by a scholar intimately acquainted with the industry reveals that a typical cruise ship goes to sea with between 2,000 and 3,000 crew members. It goes on to tell us:

The mandatory workload of a worker on a cruise ship is 308 hours a month. That is a 77-hour work week. That means eleven hours every day of the week. Many workers work much more than that, but that is what they are paid for.

The global injustices that cruise ships reinforce in the countries they visit are mirrored among those they employ. Ross Klein sums it up this way:

When I first turned my attention to this issue, I rather imagined that luxury cruises would cater to the kind of people who travelled first-class as portrayed in the movie Titanic. Yet, these recreational ventures are far from the preserve of the super-rich. One study found that some 15 percent of the U.S. population had gone on a cruise and that seven to eight percent had done so in the last three years. This suggests a pattern of mass consumption that involves significant numbers of working-class people.

As a young trade union activist in Britain, in the early 1970s, I well remember making several futile attempts to convince fellow workers to support the appeals of the Spanish unions to deprive Franco’s fascist regime of revenue by shunning cheap holidays in Spain. Sadly, a sunny beach at a reasonable price frequently won out over class solidarity. It’s much the same with capitalism’s ugly turn to cruise ships as a source of profit. We should spread awareness of just how reprehensible this industry is but there is little to be gained by the pointing of a moralizing finger at the average consumer.

Rather, in our unions and social movements we need to do all we can to challenge the real culprits, the big companies that function as cruise operators. We should support all efforts to protect the natural environments they threaten, the destinations they plunder and the workers they exploit. These floating palaces represent everything that is greedy and destructive in this society and we must struggle for a world based on principles of rationality, global justice and ecological sustainability where they are simply inconceivable.

John Clarke is a writer and retired organizer for the Ontario Coalition Against Poverty (OCAP).