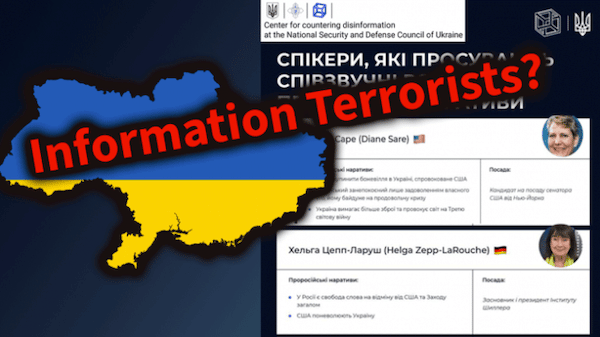 Under Public Law 117-128, the U.S. Congress is funding an organization called Ukrainian Center for Countering Disinformation (CCD), whose professed purpose, according to its website, is to “counter Russian disinformation.” But its real purpose may be to create the equivalent of a “fatwah list” of alleged traitors whom patriotic Americans and/or Ukrainians will feel they have a green light to assassinate.

The fatwah list includes such “traitors” as writers Chris Hedges and Glenn Greenwald, political scientist John Mearsheimer, Pink Floyd singer Roger Waters, Senator Rand Paul (R-KY), former presidential candidate Tulsi Gabbard, conservative military analyst Edward Luttwak who was placed on the list for suggesting that referendums should be held in the Donetsk and Luhansk regions concerning their relations to Ukraine, and Henry Kissinger, who is worried about the prospects of a war between the U.S. and Russia.

The profiles of many people targeted under the “hit list” has been posted on a website, Myrotvorets (meaning “peacemaker” in Ukrainian), whose domain name is listed as being in Langley, Virginia, headquarters of the CIA.

Established in 2014 following the Maidan coup with assistance from a U.S. army intelligence officer, Joel Harding, Myrotvorets aims to out Russian intelligence service (FSB) agents and Wagner mercenaries alongside pro-Russian propagandists and features gruesome photos of dead Russians. Its welcome message advertises itself as a “CIA project.”

Sadly, many on the Myrotvorets enemies list have already been assassinated. When this occurs, the Ukrainian word ЛИКВИДИРОВАН (“LIQUIDATED”) is stamped across their picture in big red letters—as happened when Italian journalist Andrea Rocchelli was murdered.

In an indication of its foul character, Myrotvorets has listed the names of more than 300 children, among them 13-year-old Faina Savenkova who has written on social media about the terror meted out by the Ukrainian Army in eastern Ukraine.

The expansion of the Ukrainian government’s assassination campaign—modeled after the CIA-run Phoenix operation in Vietnam—was exemplified with the killing of Sergey Gorenko, the Luhansk People’s Republic (LPR) Prosecutor General, and his deputy, Yekaterina Steglenko, after a Kyiv bomb rocked the headquarters of the Prosecutor General’s office in Luhansk on September 16.

Also on September 16, at least five U.S.-made HIMARS missiles hit the civil administration building in Kherson city in an assassination attempt on Kirill Stremousov, the deputy chair of the military-civilian administration. Ekaterina Gubareva, a government employee who was wounded, (a driver was killed), called the strike a “craven act of terrorism.”[1]

Scott Ritter, the former Marine Intelligence Officer who exposed the fraud surrounding the Weapons of Mass Destruction (WMD) in Iraq, is among those on the CCD’s list of traitors who has been listed as an “enemy of Ukraine” on the Myrotvorets website.

On September 7, Ritter participated in a press conference hosted by the Schiller Institute, a German-based economic think tank, where he criticized New York’s congressional delegation for supporting House Resolution 7691, the Additional Supplemental Appropriations Act of 2022, which became Public Law 117-128 on May 21, 2022.

In a July letter to Democrats Chuck Schumer, Kirsten Gillibrand and Paul Tonko, Ritter wrote that Public Law 117-128 violated the First Amendment of the United States Constitution which asserts that “Congress shall make no law…abridging the freedom of speech, or of the press.”

At the press conference on September 7, Ritter reiterated his disdain for the fact that U.S. taxpayer funds that are subsidizing the Ukrainian government are “being used to target and intimidate American citizens voicing their constitutional rights to freedom of speech.”

Particularly dangerous, Ritter said, is the use of the label “information terrorist” by the CCD, which “basically gives a green light for critics of government policy to be adjudicated as terrorists,” and could “mean sanctioning the murder of Americans abroad or at home.”

According to Ritter, the threat of Ukrainian state terrorism extending into the U.S. is very real.

There are many Ukrainians living near him in upstate New York, he said, who worship Stepan Bandera, a Ukrainian nationalist and Nazi collaborator in World War II.

What kind of message does it send, Ritter asked, for the U.S. government to be supporting these groups and to label critics of its policies as “information terrorists”?

“If you think the website is a joke, ask Alexander Dugin who had to attend the funeral of his daughter [Darya Dugina who was killed in a car bomb by terrorists in Moscow on August 23].”

Ritter considers himself an American patriot who served his country for years in the military and as a weapons inspector in Iraq.

He recalled being called “Saddam’s shill” and all kinds of other names for reporting the truth about the mythic WMD, and said that if people had absorbed what he said, the war in Iraq could have been avoided and millions of lives saved.

With regard to Ukraine, Ritter said he is again being denounced, this time for making factual statements, such as that a) NATO has bases on Ukrainian soil; b) the war is a proxy conflict between the U.S. and Russia; and c) sanctions have harmed the U.S. and EU countries more than Russia.

Ritter said that he is further being attacked because he undertook a careful forensic analysis of the atrocity in Bucha in March/April, which concluded that it “seemed to have been carried out by forces subordinate to the Ukrainian government.”[2]

Ritter says that he invites debate and disagreement about his assessments—including from people working at the CCD.

“If people disagree with my facts and conclusions, then debate me—but don’t seek to silence me through intimidation or label me an information terrorist which could potentially mark me for death.”

Geoff Young, the Democratic Party nominee in Kentucky’s 6th Congressional District, is also on the Ukrainian government hit list—though few in his party have stood up for him.

Young says that he is on the list because he has adopted the position that, since 2014, Ukraine has not been a functional democracy.

Rather, it has been largely controlled by the U.S. State Department and CIA and has been shelling innocent civilians in Donetsk and Luhansk, killing more than 10,000 civilians—three times more than were killed in the U.S. on 9/11.

Ukraine has further sent well-armed Nazi groups to attack ethnic Russians in acts of ethnic cleansing that have been unreported in U.S. media.

Young says that his inclusion on the hit list is a form of election meddling—they are trying to discredit his name and ruin his chances of unseating Republican Party incumbent Andy Barr, against whom Young is running.

Another person on the hit list is Diane Sare, a Burlington, Vermont, native who is challenging Chuck Schumer for his Senate seat in New York in the November midterms.

A former classical musician and choral conductor, Sare is a founder of the Schiller Institute and worked for 32 years with Lyndon LaRouche until his death in 2019.

LaRouche was a controversial figure in U.S. politics who is regarded by some as a cult leader, CIA creation or even fascist.

Many of his ideas were visionary nevertheless, including in his support for U.S.-Russia cooperation and the development of a new world security architecture and economic system that would be more democratic, equitable and prevent future wars.

Sare said at the September 7 press conference that the death list and demonization campaign has been successful in silencing debate over the U.S. arming of a fascist regime in Ukraine—a regime that has banned 13 opposition parties, shut down Russian media, outlawed collective bargaining and threatened anyone who plans to vote to rejoin Russia in referenda being set up in eastern Ukraine.

Sare also said that Payton Gendron, the Buffalo, New York, shooter who shot up Black people in a grocery store earlier this summer, wore logos on his jacket that were similar to ones worn by members of the Azov Battalion.

Every American in her view should demand that their elected representatives take a stand and dissociate the U.S. from the Ukrainian government and its neo-Nazi army regiments.

The first speaker at the September 7 press conference was Colonel Richard Black, a decorated Vietnam War veteran and former State Senator from Virginia, who emphasized like Ritter how the U.S. Congress was attempting to control freedom of speech in the U.S. in violation of the U.S. Constitution by having a foreign entity—the CCD—do it.

According to Black, the Department of Homeland Security tried earlier in the year to establish a disinformation governance board headed by Nina Jankowicz, a Ukrainian linguist and adviser to former Ukrainian President Petro Poroshenko.

Her presentation to the public was so extreme and off-putting that the center’s formation was pause d—at least for the time being.

Black said that, among those targeted by the CCD, are patriotic Americans with well-informed views on foreign policy like Senator Paul and former Congresswoman Gabbard.

Black said that U.S. policy in Ukraine is disastrously courting the risk of all-out nuclear war. The labeling of dissenters as “information terrorists” potentially exposes them to the death penalty, with many people on the Myrotvorets website having been assassinated.

Though the facts remain speculative, a Rio de Janeiro newspaper reported that the assassination attempt on September 1, 2022 directed against Argentina’s Vice President Cristina Fernández de Kirchner may have even resulted from her refusal to condemn Russia’s special military operation and her calls for peace talks to end the war.

The Problem When People Know What Ain’t So

The final speaker at the September 7 press conference, CIA veteran Ray McGovern, a founder of Veteran Intelligence Professionals for Sanity (VIPS), quoted from humorist Will Rogers who s aid “it isn’t what we don’t know that gives us trouble, it’s what we know that ain’t so.”

Among the things Americans claim to know that ain’t so is that Russia is the aggressor in the conflict with Ukraine, and that Russia’s annexation of Crimea was “unprovoked”—which is patently untrue.

Crimeans in fact voted to rejoin Russia right after the U.S.-backed Maidan coup in 2014—which academics like Timothy Snyder of Yale along with mainstream media analysts, McGovern said, continue to deny.

In 2013, McGovern said, Russian President Vladimir Putin wrote an op-ed in The New York Times after he had backed a deal that prevented U.S. military intervention in Syria in which he expressed his happiness at the increasing trust between the U.S. and Russia.

Putin also wrote that he did not agree with Obama’s speeches about American exceptionalism—which is what made him a target of U.S. regime-change and destabilization efforts in which Ukraine has been used as a proxy.

Earlier this year, former president George W. Bush gave a speech in which he said that one man had “decided to launch a wholly unjustified and brutal invasion of Iraq—I mean of Ukraine”—and his audience in Texas laughed.

The propaganda in the U.S. has generally become so thick, McGovern said, that people are convinced “they know what ain’t so.” In turn, they end up supporting the deadliest policies—like they did with Iraq and are now doing with Ukraine.