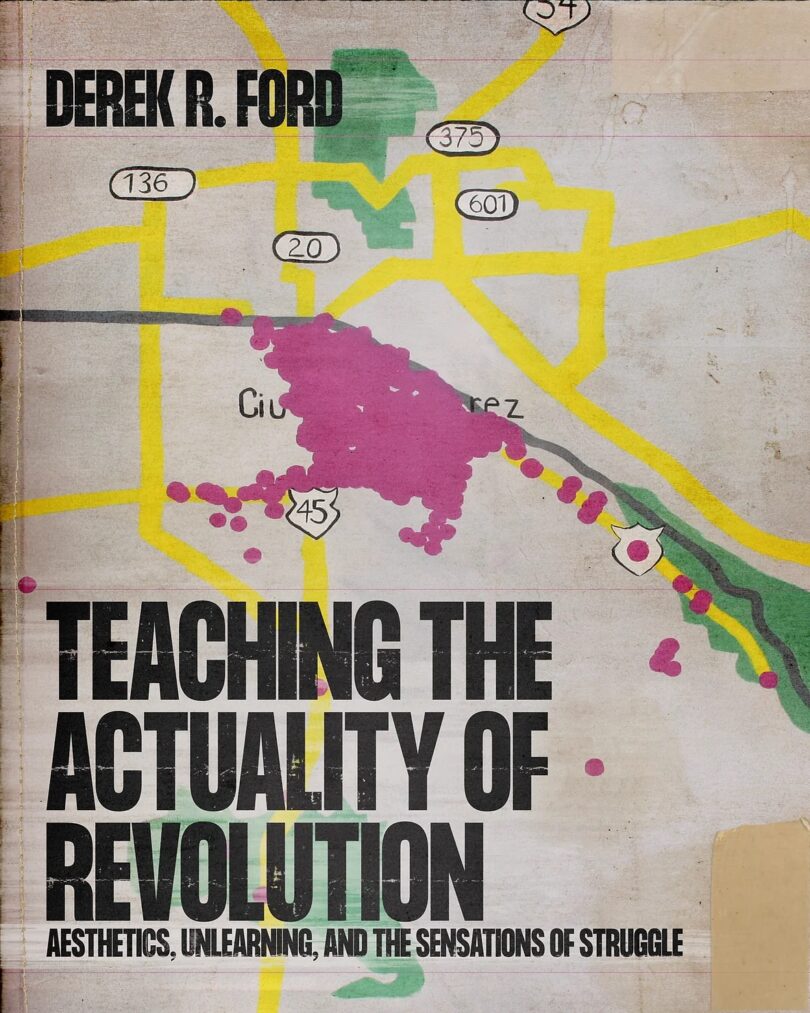 Teaching The Actuality of Revolution by Derek R. Ford.

There’s no such thing as a lone mind or individual, and that’s increasingly apparent today, as literal and figural networks have made the very notion of a distinct or detached intellectual absurd. Those who want fight for our side in the battle of ideas must do so by becoming nodes in an expansive network of struggle. That’s always been my goal as a writer, and that’s why Derek R. Ford’s latest projects have compelled me to engage them in some way, because reading these pages and hearing these words not only teaches me about my own praxis but impact my—our—subjectivity.1 This is especially so with his latest book, Teaching the Actuality of Revolution: Aesthetics, Unlearning, and the Sensations of Struggle, in which Ford expertly and clearly explains oppression and exploitation as perceptual ecologies and carefully constructs a communist approach to unlearning capital’s sensorium by performing alternatives in our present. “Entering the class struggle aesthetically is important at this moment,” he contends, “because, despite the endless proliferation of ever-more refined critiques of it, the re­production of capital continues.”2 In this vein, Ford bypasses accounts of capital’s illogics and takes up my own gesture of pointing to how, as I put it a while back, “we as subjects, have been shaped within capitalist relations of production” and therefore must refashion—or disidentify—with that subjectivity.3

Ford knows that those reading his book—anybody and everybody—don’t need him to tell us the system is broken. We know that, even if we can always benefit from deeper analyses. He does quickly spill some ink, however, on those intellectuals who are either afraid to put anything on the line (and so deploy watered down theories) or accept the unquestionable dogma permeating the academy today: that revolutions are impossible.4 On the contrary, socialist revolutions are actual, and revolutionary education’s primary task in our current conjuncture is to facilitate encounters with the actuality of revolution. As they frame it:

The practical, political, and ideological conjuncture is shifting in ways favorable to overcoming the interruption in the ideological continuity of our movements. Upticks in spontaneous struggles are becoming more and more common, creating educational opportunities for more and more people in the sensations of struggle, the feeling of revolutionary possibility, and the knowledge of revolutionary theory. The tasks before us are in large part, then, aesthetic and pedagogical.5

Subjectivity—the forces that transform the world be seizing on the objective conditions for revolution, is pedagogically reproduced through the constant re-learning of capital’s perceptual ecology.

This ecology “affects temporally, spatially and ideologically the art of sound,” as I phrased revolutionary musical education once.6 And while I’ve insisted for decades now that culture be engaged as part of a totality, Ford again expands this notion by refusing to admit the ontological existence of such things as culture, music, or even sound. Here, he provides an inventive and surprisingly succinct overview of Marx and Engels’ “leap” or, as he teases us humanists, “break” between 1844 and 1845, during which time they abandoned the idea of distinct senses with inherent properties and developed a materialist aesthetics in which our perceptual capacities, sensual organization, and the totality of what is sensible are ongoing historical productions and struggles.

Listening to my listening

The word “synaesthetic” might be a better fit for the book’s title, as it expands into a pedagogical prototype and political practice of perceptual mapping that enables us to unlearn capital’s aesthetic regime and experience and create alternative ones. Although he doesn’t proceed according to distinct senses or sensual organs, I hear again and again in the pages just how crucial listening to our listening is, I hear it in the same frequency as the refrain with which I started this review. As you read, listen to Ford listen to his listening, to Marx’s listening, to the silent sounds of thought pointing to arrhythmic ruptures of unlearning that sometimes echo and other times pierce through the page with vibratory nuances that change each reading.

In mapping capital as an aesthetic network, Ford’s first chapter builds on Jennifer Ponce de León and Gabriel Rockhill’s “compositional model of ideology” that names how “our subjectivity, consciousness, and sensuousness are the prod­uct of both the overall complex determinations of history and everyday encounters that either reinscribe, alter, or challenge our ways of making sense of the world.”7 Ponce de León and Rockhill taught Ford how Marx framed commodity fetishism as aesthetic, and he runs with that in—an again—lucid and provocative reading of Capital. Marx, Ford notes, hears value “only by listen­ing to the language commodities, for ‘the value of commodities… is told us by the linen itself, so soon as it comes into commu­nication with another commodity, the coat.’”8 What follows is a fascinating and much-needed corrective to the mis-readings of Marx’s alleged theory of “primitive accumulation,” which Ford first rectifies by listening to Marx’s words: “so-called primitive accumulation,” a “so-called” theory Marx heard in political economy as the endless repetition of capital’s pre-history. The distorted reading of it as a past and accomplished stage “prevents the aesthetic pedagogy of Capital from teaching the actuality of revolution as it weaves the ongoing gaps in the temporality and rationality of capital’s perceptual ecology together.”9

Marx’s aesthetic pedagogy teaches, as we learn in chapter two, by pointing to the gap’s capital must reproduce and try to suture together. Here, in the crux of the educational praxis that I think represents the culmination of the last six or seven years of Ford’s educational theories, they introduce a theory of teaching as unlearning, “a practice that, by pointing, provokes, opens, and maintains the spaces and times required for unlearning capital’s world-form.”10 As they word it:

At the same time, Ford is adamant that no pedagogical form is inherently revolutionary or reactionary, and that at times content takes priority over pedagogy. Yet they simultaneously insist that such interruptions or breakdowns of unlearning “can create a place and time in which tradition isn’t relegated to a completed history but where it impresses its force on the present.”12

Transitioning from pedagogy to epistemology, chapter three delineates between the determinate knowledge of learning and the indeterminate thought of unlearning. This entails a bold yet honest recuperation of Louis Althusser, as Ford tells us how Althusser’s specific aesthetic encounters lead him to proffer that art “produces the experience of knowledge in the making, or the immersion in the disjuncture of thought, which can be neither true nor correct, only possible.” As Ford summarizes, “in marxism, philosophy aims for correct theses, science aims for concrete knowledge, while aesthetic education aims at the experience of revolutionary possibility, or the sensation of the revolution to be accomplished.”13 Put another way, thought is the interruption of potentiality onto the ahistorical scene of capital; the feeling of History where decades happen in days.

The remaining two chapters address listening and rhythm, and it was only after playing the tape through to the end that I could listen to the totality of the work, its silences and noises. I won’t spend time on them because, in many ways, you just have to listen to them or, perhaps, listen to yourself listening to them. I will say, however, that Ford’s theoretical flexibility and strategic proficiency are on full display as he transitions seamlessly between Althusser and Henri Lefebvre before the brief yet commanding conclusion.

This is the first book Ford’s written that has a substantive closing, the first one that didn’t feel hurried. It serves as a conclusion that returns to some core themes anew and assembles them in a new pedagogical model, or example of (un)learning. Ford ends up terming it perceptual mapping, his own take on Fredric Jameson’s call for a cognitive mapping project. In the early 1980s, Jameson brought together political economy and urban design to argue for a project of cognitive mapping that would function, in their words, “as an explicitly aesthetic and pedagogical project to address the abandonment of the work of art as a work of teaching.”14 This was a time when everyday life was increasingly fragmented and disconnected from the overall totality of the world, and Jameson’s cognitive mapping asks us to map that totality, all while knowing such a task is impossible.

Fred Moten enters here, and in particular his claim that Jameson’s project would benefit from multimodality and, in particular, the sonic, which is why Ford writes about “perceptual” rather than “cognitive” mapping. The key here is that mapping the totality represents a model for teaching the actuality of revolution by helping us unlearn capital’s aesthetic regime and learn about the possibility of other shared worlds. The pedagogical dynamic emanates from the impossibility of knowing one’s place in the world while the political dynamic comes from a new revolutionary vision for the world. Pedagogy produces the experience of ruptures in the world while politics produces the organization and vision of a new world.

As someone who came to revolutionary politics a little later in life, and who sacrificed much of my career and personal prosperity for it, I was pleased when Brad Porfilio introduced me to Derek in 2014. We recognized each other as intellectual and political comrades. Comrades fight on the same side, depend on and encourage each other, hold each other accountable and expand the network by creating new nodes in the collective class struggle.

While it may be true, as Ford states, that key members of the first generation of scholars in the field of critical pedagogy disidentified with the communist horizon of Marxism, it was certain instantiations of Marxism that these scholars rejected, not Marx’s overall critique of political economy. My own political trajectory can be traced to the iconoclastic work of Henry Giroux, and to others who can be characterized as belonging to the first generation of North American critical pedagogy such as Donaldo Macedo, Roger Simon, Stanley Aronowitz and others.  While their politics may not fit neatly into the category of ‘Marxist’ one cannot underestimate the importance of their contributions.  Even today, few writers exhibit Giroux’s courage and tenacity as he warns America about the threat that fascism poses to what is left of its so-called democracy.

Importantly, comrades do not always agree and, in fact, can almost always find lines of demarcation and difference. Just as importantly, however, they respect such disagreements and differences, engage them productively, and continue struggling together. This is the task to which I’ve dedicated my life, and it’s a legacy Ford and so many others—inside and outside of education—will build in unforeseeable ways. History doesn’t happen because a small group of people share a complete political identity; it happens because masses of people shed their timidity, risk their reputations, livings, freedom, and lives, and let the actuality of revolution guide their every move.  It is this commitment to revolutionary struggle that offers us a means to unite the new generation of critical scholars with the old and to move the project of liberation forward into a new future.

Peter McLaren is Distinguished Professor in Critical Studies, College of Educational Studies, Chapman University, where he is Co-Director of the Paulo Freire Democratic Project and International Ambassador for Global Ethics and Social Justice. In 2005, a group of scholars and activists in Northern Mexico established La Fundacion McLaren de Pedagogía Critica to develop a knowledge of McLaren's work throughout Mexico and to promote projects in critical pedagogy and popular education. On September 15, 2006, the Catedra Peter McLaren was inaugurated at the Bolivarian University of Venezuela.