Joseph Halevi teaches in the Political Economy Discipline at the University of Sydney and is associated with the Institut de Recherches Economiques sur la Production et le Développement (IREPD) at the Université Pierre Mendès France in Grenoble, France. 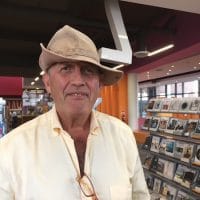 Joseph Halevi was born in 1946 in Haifa, which then was part of British Palestine but since 1948 in Israel. Most of his earlier life was spent in Rome, where he graduated in Philosophy and Political Economy. He has been Professor of Economics at the Interna-ional University College Turin, Italy, since 2010.

Here comes the travail of crisis.  The more they talk about coordination, the more it becomes necessary to concentrate on the conflicts revealed by the very talk of coordination.  The G20 finance ministers’ meeting, held in South Korea on Friday, has already been mortgaged by the case opened by US Treasury Secretary Timothy Geithner regarding […]

The European tour of Wen Jiabao is taking place while the conflict between the US and China over the yuan/dollar exchange rate is getting worse.  At the same time, a similar if less noisy clash exists between China and the Eurozone countries.  Last but not least, tensions have also arisen in the Sino-Japanese relations following […]

The new regulations on banks’ capital requirements known as Basel 3, made known to the public in mid-September, are a major institutional boost to the monopolistic position of the largest banks.1  In the new framework the capital that banks must hold against lending activities has been raised from a ratio of 2%, established by Basel […] 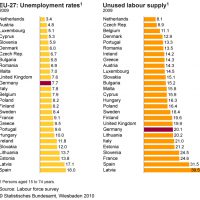 We are being told that Germany is successfully recovering from the crisis.  However, despite the recovery, the German economy is below most other countries’ in relation to the pre-crisis levels of output.  When the crisis began the German economy’s dependence on exports caused a sharp fall in industrial production.  The initial liquidation and the subsequent […]

Part 1: The German Space of Accumulation The present state of affairs in the Eurozone and in the EU reflects the partition of the European Union into three groups. The first is a group of neomercantilist countries centred on Germany and formed by Holland, Belgium, Austria and Scandinavia.  Their neomercantilism can be defined as a […]

The European public debt crisis, artificially created by the puritan obtuseness of German Chancellor Angela Merkel, has spread to even Japan.  In fact, Naoto Kan, the new prime minister, mentioned Greece in a speech in which he claimed to fear the collapse of the Japanese economy under a heavy public debt equal to 230 percent […] 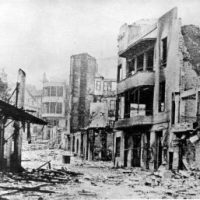 A street of Guernica after the fascist bombardment of 26 April 1937 Greece faces a veritable economic Guernica, a massacre, in the face of which the European Left shows an unforgivable passivity.  What is imposed on Athens is meant as an example, to strike terror into Spain, Portugal, and even Italy.  But even France, […]

There is now a general crisis in Europe without a visible or credible way out.  It is clearly evidenced by the continuous flare-up of hotspots of tension: from Greece to the Iberian Peninsula and back, and then onto increasingly less veiled allusions to Italy and a dramatic about-face of Paris. Until just over a month […]

Paper presented at the Congrès Marx International V, Paris-Sorbonne et Nanterre, October 2007 1.  Introduction About a decade ago the radical left, both in Italy and elsewhere in Europe, had been gripped by an understanding of contemporary capitalism as based on a three-pronged tendency: ‘globalization’ as an already accomplished state, the ‘end of labor’ due […]

If we take a look at the recent self-described progressive US presidents (Jimmy Carter and Bill Clinton), we will notice that their progressiveness invariably fades away, not even intentionally.  That is because the beast compels them to align themselves with its own reality.  Carter, who campaigned against the wage stagnation of the Nixon-Ford years, collapsed […]

In the Financial Times of March 31st, Martin Wolf set down a straightforward criterion to evaluate the outcomes of the G20 meeting in London.  Will they decide, he asked, to put forward a plan to shift world demand from the countries with a balance of payments deficit to those with a surplus?  The underlying reasoning […]