We are being told that Germany is successfully recovering from the crisis.  However, despite the recovery, the German economy is below most other countries’ in relation to the pre-crisis levels of output.  When the crisis began the German economy’s dependence on exports caused a sharp fall in industrial production.  The initial liquidation and the subsequent reconstitution of inventories explain in part the present rise in activity.  The most important unspoken factor in the recovery consists in that Germany has increased its deficit spending far more than the rest of the eurozone.  According to standardized OECD figures, the 2008 German budget was balanced (in 2007 it even exhibited a small surplus of 0.2% of GDP).  The mid-year OECD estimates for 2010 ascribe to Germany a budget shortfall of 5.4% relatively to GDP.  Hence from 2008 the deficit has expanded exactly by 5.4%.  For the same two-year period the Italian deficit expanded by 2.5% in relation to GDP and now is 0.2% below the German deficit.  Last but not least, France’s budget deficit has risen by 4.5%, also less than Germany’s.

The dynamic of the public-sector deficit form 2009 to 2010 reveals the nature of the policies of the German government.  Compared to 2009, the eurozone countries are making a U-turn, enforcing budget cuts aimed at deficit reductions by the end of this year.  Not Germany, though, whose public-sector shortfall will rise this year by more than 60% as it edges up from 3.3% to 5.4% of GDP.  In other words, the harshest crusader against public deficits has been more fiscal expansionary than the rest of the eurozone.  In the context of the single currency as well as Merkel’s financially punitive threats to the other countries of the eurozone, the German government’s conduct acquires a Mephisto-like dimension.  By compelling the other countries to reverse course in their budgetary policies, German capital gains wider margins to enhance the mercantilist, export-oriented nature of its economy.

Berlin’s larger public spending is not undertaken in order to expand employment via stimuli to domestic demand.  Indeed, this year consumption is expected to fall by another 1.4%.  The increase in public spending is tied to a century-old criterion for minimal social stability, such as the kurzarbeit scheme where the government pays part of the wages of workers who otherwise would be fired.  But public spending is also directed to facilitating the restructuring of German industry towards external trade.

As a matter of fact, exports have been the main factor in the German “recovery.”  According to the Statistical Office of the Federal Republic, in the January-June period, exports rose by 18% compared to the same period in 2009.   The rise in imports trailed behind exports by 2%.  The entire gap between export and import growth occurred in the trade with countries outside the European Union, whereas with the EU the growth of German imports outpaced that of exports.  Yet the European Union remains the area where Germany obtains the largest share of its overall trade surplus.  As for trade with non-EU countries, Germany has benefited from the devaluation of the euro against the US dollar due to the Greek public debt crisis prompted by Berlin earlier in the year.

Literally and metaphorically, more Mercedes have been shipped to the USA, especially since bankers and their coteries have further enriched themselves with the crisis.  Moreover, Germany has significantly benefitted, in the Asian markets, from the revaluation of the yen against the US dollar and more so against the euro.  For the first time, and particularly in China, German capital goods companies obtained an advantage over the dominant Japanese firms.  However, Germany will never achieve a persistent, structural trade surplus with China.  It follows that Europe remains the centerpiece of German capital’s quest to maximize external surpluses.

On the European terrain, Germany follows a strategy of no compromise, whose cornerstone is wage deflation.  German competitiveness is certainly due in part to the technological quality of its production.  But that competitiveness is not based on great productivity performance; in the last 10 years, productivity in Germany has been rather disappointing in comparison to other EU countries.  By contrast, the growing gap between German productivity and German wages is not disappointing at all.  The fact that in Germany wages are retreating in relation to productivity, when the latter is not very dynamic, is a proof of the harshness of wage repression.  The outcome is the expected fall in domestic consumption as opposed to export growth.

A further proof of wage repression in Germany is the steep rise in the percentage of workers with below median wage rates.  All this contributes to mass unemployment.   The commonly used data showing a rate of unemployment of 7.6% are highly misleading, since in Germany part-time and causal jobs have also risen fast as a proportion of employment.  In this respect, the Federal Republic Statistical Office has calculated that the unemployed, the underemployed, and the “hidden labour force” (those who are not looking for jobs but would like to work and those who are unavailable in the short term but are looking for work) together constitute over 20% of the total labor force. 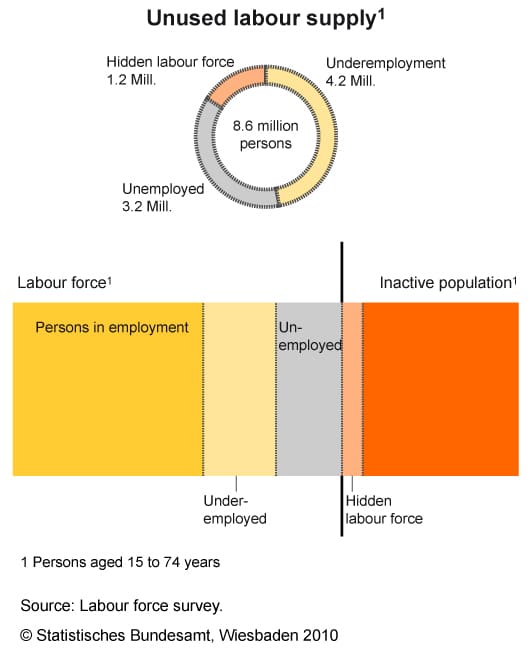 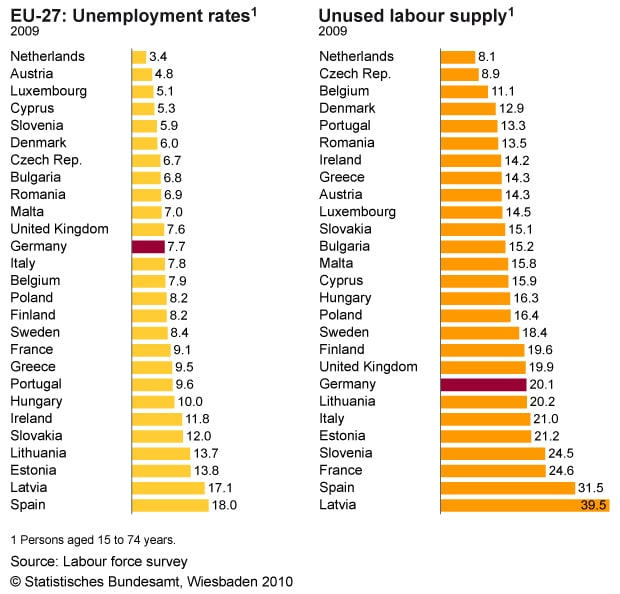 Joseph Halevi is Senior Lecturer of Political Economy at the University of Sydney.  This is an expanded version of the article published in Il Manifesto on 12 September 2010 under the title of “Germania: le ombre della ripresa.”  Translation by the author.

Joseph Halevi teaches in the Political Economy Discipline at the University of Sydney and is associated with the Institut de Recherches Economiques sur la Production et le Développement (IREPD) at the Université Pierre Mendès France in Grenoble, France.