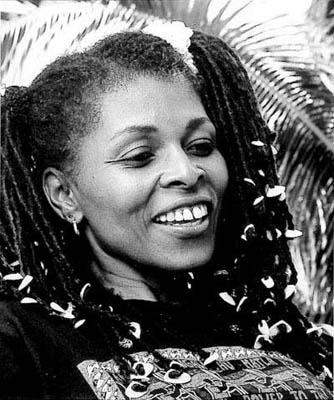 Speaking from Cuba, where she was granted asylum after escaping from a US prison in 1979, Assata Shakur, the alleged “Bandit Queen” of the now defunct Black Liberation Army, announced today that she would hand over one million “HANDS OFF ASSATA” t-shirts to the person or persons who successfully apprehend US Secretary of Defense Donald Rumsfeld and bring him to face war criminal charges at the International Criminal Court.

“Black people don’t scare me,” responded Secretary Rumsfeld, in a telephone interview. “For one thing, their t-shirts shrink after washing. For another, this woman’s name is not Assata Shakur, it’s Joanne Chesimard. And finally, the United States government has just offered one million — dollars, not t-shirts — to anyone who captures her. She’s a convicted cop killer, for chrissake.”

Assata Shakur, nee Joanne Chesimard, was, in fact, convicted of killing state trooper Werner Foerster in 1973, after the car in which she and two companions were riding was stopped by police on the New Jersey Turnpike for a broken taillight. Ms. Shakur was, at the time, a reputed leader of the Black Liberation Army, an underground spin-off of the Black Panther Party, whose members, it was later revealed in Senate hearings, had been targeted for surveillance, death, and incarceration by J. Edgar Hoover’s FBI.

Along with her supporters, Assata Shakur insists she is innocent — that not only did troopers shoot dead one of her companions after police stopped her car, but also that she herself was shot while her hands were raised over her head, making it impossible for her to wield a gun. Ms. Shakur further alleges that, once wounded and in custody, she was tortured by police. Sentenced by an all-white jury to life in prison, Ms. Shakur escaped with the help of outside friends and was given sanctuary by the Cuban government. Her offer of one million of the popular “HANDS OFF ASSATA” t-shirts appears to have been motivated by the US government’s announcement, on May 2, of a $1,000,000 reward for her capture.

Liberals and progressives have been quick to respond to Ms. Shakur’s offer, indicating that, within the American counterculture, activists will do just about anything to wear the right person’s face on their chests. “Who wants one million oppressive patriarchal imperialist dollars?” queried Mulchy Greenleaf, lesbian blogger and founder of the organization T-Shirts Not Bombs. “Besides, I could get five times that much selling those groovy Assata t-shirts on the Web. Watch out, Rummy baby — you’re history.”

Indeed, Ms. Shakur’s offer may have given the American peace movement just the initiative it has needed to stop the war in Iraq. “The feds want to give $1,000,000 in taxpayer money to any thug who can kidnap a woman who probably never killed anybody, while people like Donald Rumsfeld — who are certifiably accountable for the torture and deaths of thousands of innocent people — live free as heroes,” remarked Brian Bezerko, veteran antiwar activist. “It’s disgusting. I wouldn’t be surprised if the entire Bush administration finds itself hog-tied and wriggling in front of the International Criminal Court before this is over.”

Meanwhile, Defense Secretary Rumsfeld laughs at danger, saying that the threat of capture has given him a chance to perfect his Edward G. Robinson imitation. “Yeah, my troops plugged about 100,000 Iraqi civilians, see? We showed those prisoners who’s boss, see? And I never lost my job — so you got nothing on me, see? Now, that Chesimard dame, she could have maybe shot one cop. She’s the bad one, see? She’s the one you want, yeah.”

Although Mr. Rumsfeld professes indifference to would-be bounty hunters, many of his advocates worry about his safety and are shoring up defenses.

“All Miss Chesimard had to do, if she wanted to go around shooting people, was join the US military,” continued McNurtz. “Maybe the equipment is a little shoddy, but they give women and African Americans the same right as white men to kill with impunity. And there’s equal-opportunity torture, too. Of course, she would have had to get permission from Mr. Rumsfeld for the tasers and vicious dogs, but he would have given it. Just like he did for Guantánamo and Abu Ghraib.”

The federal government has also begun to show concern for Mr. Rumsfeld’s well-being. President Bush, alleging that the Secretary of Defense could never get a fair trial at the International Criminal Court due to the Court’s “bigotry against war profiteers,” has offered to grant Mr. Rumsfeld asylum in Iraq. “Thank God we’ve created a haven from prejudice there,” he said.