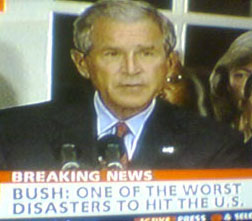 [PU – Washington, DC] In what some are calling an exceptionally “natural” natural disaster, the White House and the Capitol Building were hit by a massive, Category 5 hurricane last week, and washed completely away. While the rest of the nation’s capital remains relatively intact, thousands of U.S. Senators, Representatives, and government officials have been left without food or shelter, and several recent appointees at the Federal Emergency Management Agency have been photographed floating face down, at really good camera angles, in the Potomac.

Although the disaster happened several days ago, few people have offered assistance to survivors, possibly because of a general lack of concern about the Bush Administration. Rap artist Kanye West appeared to speak for large numbers of war-weary Americans when he yawned into the camera and smiled, “We don’t care about Bush people.”

Those who do care about “Bush people,” however, are quick to criticize rescue efforts as incompetent and politically biased, charging that those on the “liberal” end of the spectrum were able to evacuate much earlier. Indeed, Congresspeople including Charles Rangel, Dennis Kucinich, Cynthia McKinney, and Barbara Lee were hard-pressed to explain why they were given lifeboats with plenty of supplies, including shampoo, loofahs, and cute bottles of lotion samples, while other federal higher-ups were left to fend for themselves.

Currently, the scene in and around Washington’s Capitol Hill is becoming more chaotic as time passes, and help remains slow to arrive. With little to eat and nowhere to go, many formerly law-abiding public servants have taken to breaking into stores to obtain basic survival necessities. As competition intensifies, some have reverted to stereotypic ethnic behavior. Senate Majority Leader Bill Frist, for instance, “found” a crate of soggy bran-flakes and some distilled water, while Secretary of State Condoleezza Rice “looted” two rolls of paper towels and several Krispy Kreme donuts.

“These people don’t know how to act,” observed Roshawn Johnson, resident of the outlying Anacostia section of Washington that was left miraculously untouched by the storm. “You put them in a life-and-death situation and they show their true selves. I ain’t lifting a finger to help them.”

Indeed, our infrared helicopter skycam spotted Senator Rick Santorum (R-PA), known for his ultra-conservative stance on morals and sexuality, breaking into a sex-paraphernalia store and walking off with several boxes of butt plugs and an inflatable doll. Mr. Santorum was later apprehended by other Congressmen with butt plugs, and has reportedly been detained in a makeshift jail afforded by the men’s restroom at the Greyhound bus station.

Critics charge that consequences for illegal acts are unnecessarily dire, pointing to Representative Tom DeLay (R-TX), who succumbed to vigilante justice after he was cornered by Washington residents and summarily shot for his alleged role in the armed robbery of four Bank of America outlets.

Except for Senator Hillary Rodham Clinton (D-NY), who was savagely punched and kicked by fellow legislators as she tried to cut in line for a shuttle to the airport, this disaster may, in fact, have hit Republicans particularly hard — a phenomenon difficult for some to understand.

“I just don’t get this,” said PBS talk show host Charlie Rose in a round-table discussion devoted to the hurricane. “Usually, tsunamis, killer storms, devastating earthquakes — they hit the same targets that lethal chemical spills, sweat shops, and unregulated corporate pollution hit: poor people in backwater countries. That’s obviously God’s will — who can complain? But suddenly this happens to affluent, powerful, good-looking people. It’s almost as if God were a communist or something.” 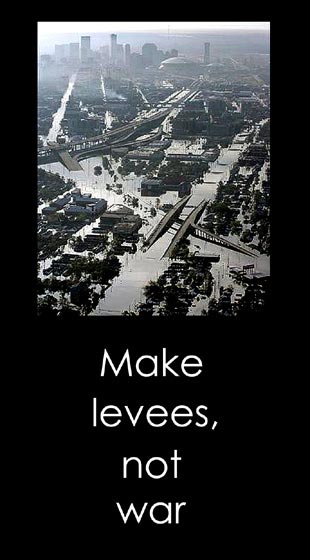 “Hey, this is not a Marxist-Leninist thing, man,” responded Butterfly Darn, 27-year-old daughter of ex-hippy radicals and founder of the new political action group, The Weather Overground. “It’s about finally getting some real climatological justice. My parents tried to overthrow this corrupt, racist, imperialist government by going underground and calling themselves ‘Weather’ people. But they never did anything about the actual weather — like, how lame was that? This time, we’re getting advanced degrees in meteorology and we’re dealing directly with the forces of nature, dig?”

“I think I see her point, Charlie,” reflected poet and social critic Maya Angelou. “From now on, we need to look for heavier-than-average storms bearing in on comparatively prosperous regions that wield governmental or corporate power. One might, in fact, say: Do Not Ask For Whom the Wind Blows; It Blows for Thee.”

“Right on, sister,” exclaimed Ms. Darn. “We need a whole new system. This U.S. government is just not worth rebuilding.” 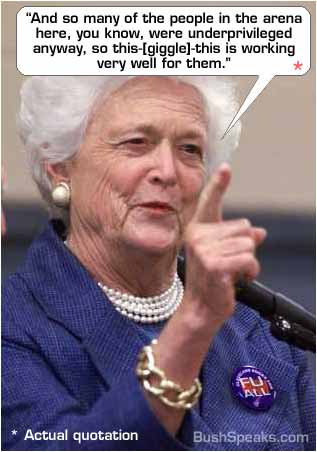 Remarks such as these have prompted Republicans to accuse their opponents of insensitivity to human suffering. Found particularly reprehensible was a comment by political essayist Barbara Ehrenreich, who, upon viewing President George W. Bush desperately clinging to dome of the Capitol Building as it floated swiftly down the Potomac, remarked: “So many of the people in the area were over-privileged anyway — this is working very well for them.”

Meanwhile, we hope that our sensationalized and wildly exploitative coverage of this calamity will shame you into caring. Remember: people need help. Vice President Dick Cheney needs his heart medicine. George Bush would like some pool toys. And everyone could use razor blades. Please. Go to our website, <www.PU.nobodycares.com>. Send us your contributions. We’ll figure out what to do with them.