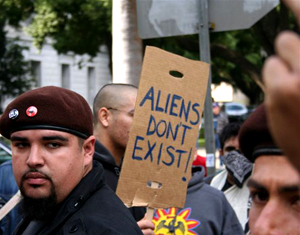 Scott Campbell lives in Oakland, California, and is an organizer with the San Francisco Bay Area Coalition to Fight the Minutemen.  He and 600 others protested on October 29 at the state Capitol in Sacramento against the Minuteman Project, which turned out 200 supporters. Mario Galván lives in Sacramento, California.  He has been working with the Zapatista Coalition for 12 years, and with Sacramento Area Peace Action for 10 years.

Seth: What else should people know about the Minuteman Project, and why?

Scott: People should know that the Minuteman Project is an armed, racist, anti-immigrant vigilante militia with documented ties to white supremacist groups.  They have committed acts of violence against people trying to cross the U.S.-Mexican border.  Their ideology represents the extreme jingoism and xenophobia of the U.S. right.

This is important to know because while the physical numbers of Minutemen are quite small, it is this ideology that is gaining currency.  The Southern Poverty Law Center has documented over 40 Minutemen-imitator groups.  Republican politicians such as California Gov. Arnold Schwarzenegger and Senate Majority Leader Bill Frist have praised the Minuteman Project.  In Arizona alone, since the Minutemen were there this April, at least 18 anti-immigrant bills have been introduced into the state Legislature.  Currently, signatures are being gathered for the California Border Police Initiative. That would add 2,000-3,000 officers to basically harass immigrant workers, along with building yet another prison along on the California-Mexico border.

In general, the Minutemen have created an atmosphere where the scapegoating and attacking of immigrants and people of color is even more acceptable than it used to be.

Mario: Apart from taking the law into their own hands, and creating dangerous situations along the border by organizing armed patrols of untrained people, the Minutemen are only attacking the symptoms of the problem, and not the root. They seek to stop immigration by criminalizing it, and don’t address the economic exploitation of Latin America carried out by the U.S. through “free trade” agreements such as the NAFTA and the proposed FTAA. So it’s “legal” for U.S. corporations to enter Mexico, make outrageous profits by exploiting Mexican labor (most factory workers earn around $5.00 per day!), and then bringing the wealth they have created back across the border to the U.S. But when a hungry Mexican or Central American (over 70 million Mexicans live in poverty) tries to cross the same border into the U.S. to find a job and feed his family, that’s supposed to be “illegal.”

Seth: How did you get involved in this opposition movement?

Scott: Once I saw news about the Minutemen in Arizona in April, I thought, “if they come to California, we’ve got to stop them.”  And sure enough, they announced they were coming.  So I called a meeting in June and the Bay Area Coalition came together out of that. 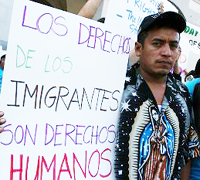 Mario: The Zapatista Coalition has been concerned for years about the rights, not only of immigrants, but also of all human beings. The demands of the Zapatista Army of National Liberation, from the beginning of their uprising in 1994 in Mexico, echo the United Nations Universal Declaration of Human Rights: the right of every person to work, health care, education, decent housing, and other basic human needs.  In this particular case with the Minutemen, we were invited by the Bay Area Coalition to Fight the Minutemen to help them carry out the demonstration that they had already begun to organize for Oct. 29. Other local organizations joined with us, and were glad to be a part of it.

Seth: What is the political significance of Gov. Schwarzenegger’s backing of the Minuteman Project in terms of his four ballot measures to “reform” state government on the Nov. 8 special election?

Scott: I’m not really sure.  Elections aren’t my thing.  Polls show most Californians oppose an armed civilian militia on the border, so I would think Schwarzenegger’s support would hurt him.  At the same time, most people don’t know the extent of his support for the Minutemen.  To be sure, the Latino/a population is aware of it, so he’s probably not too popular with them now.

Mario: I’m not really sure. We Zapatistas distrust the two-party political system in general, and are not inclined to take sides and worry about which of the two parties that are exploiting us will come out on top in any particular case. Even in that context, though, it seems obvious that the governor made a mistake when he publicly backed the Minutemen. Taking the turnout for the Oct. 29 events at the state Capitol as one isolated test sample of public opinion, the odds were 3 to 1 against the Minutemen and, by association, the governor as well.

Seth: What are you demanding that local and state officials do to address the Minuteman Project’s relations with immigrant Latinos?

Scott: Our coalition isn’t demanding anything from local or state officials.  We figure if they really wanted to do something about the Minutemen, especially on the state level, then they’d find a way to do it.  They don’t, because at the end of the day, the Minutemen and the state are on the same side — reinforcing and militarizing an illegitimate border in the interest of capitalism and the continued exploitation of workers from the global south.

Mario: As mentioned above, the Zapatista Coalition is a newcomer to this work. We have not made any demands of elected officials at this point, and still need to discuss this among ourselves before taking such a posture.  Speaking for myself, though, and not for the ZSC, I am saddened (but somehow not surprised, considering U.S. history) to see that the government allows, and even encourages, citizens to take the law into their own hands. I am reminded of Dr. Lawrence Britt’s “14 Defining Characteristics of Fascism,” which include “constant use of patriotic mottos, slogans, symbols, songs, and other paraphernalia. Flags are seen everywhere. . . ,” along with “disdain for the recognition of human rights” and “identification of scapegoats as a unifying cause.” How far is it from Minuteman to Brown Shirt? I don’t want to find out!

Seth: Who are these officials, and what have been their responses?

Scott: A group we work with, the Deporten a la Migra Coalition, has done some work with politicos.  They protested at California Attorney General Bill Lockyer‘s office on Sept. 16, have done civil disobedience in Schwarzenegger’s office, and have tried to set up a meeting with Fabian Núñez, speaker of the California State Assembly, to discuss the issue of the Minuteman Project.  The responses of all three has been inaction.

Mario: Once again, the Zapatista Coalition is new to this issue, and has not been in touch with elected officials.

Seth: How can folks help to oppose the Minuteman Project?

Scott: If people are in the Bay Area and want to get involved, they can contact us at <stoptheminutemen@riseup.net>.  Also, to get on our low volume events list, people can e-mail <stopthemm-announce-subscribe@lists.riseup.net>.  If folks aren’t from the Bay Area, we’re in contact with groups around the state, country, and continent working on this issue, so we can try to help you contact some people to work with.

Mario: As a follow-up to the successful cooperation between local and Bay Area groups on the anti-Minuteman rally of Oct. 29, at least one meeting is being planned to reflect on and analyze our work together, and to discuss the desirability of creating an ongoing anti-Minuteman coalition. Interested people can contact the Zapatista Coalition office by phone at (916) 443-3424, or by e-mail at <zapa@zsc.org>.  There are, of course, other groups already heavily involved in this work. A Google search for “Minutemen” will turn up a lot of material, both pro and con, on the issue.

Seth Sandronsky is a member of Sacramento Area Peace Action and a co-editor with Because People Matter, Sacramento’s progressive paper. He can be reached at <ssandron@hotmail.com>.