The conference is timely indeed. As William Ayers and Mike Ferner remind us, the No Child Left Behind Act, as well as chronic unequal school funding and high youth unemployment, has made schools “a battlefield for hearts and minds.” 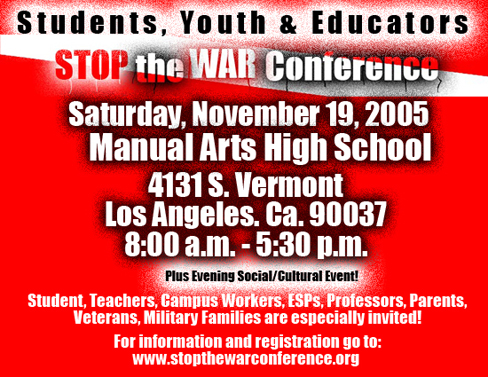 Other speakers at the conference include Michael Zweig, David Bacon, and Vickie Castro (whose only child, Cpl. Jonathan Castro, age 21, was killed in Mosul, Iraq on December 21, 2004).

Bacon will give a PowerPoint presentation on the state of Iraqi labor.

At the conference, you’ll also have a chance to see Barbara Trent’s work in progress Soldiers Speak Out, as well as Arlington West (Dirs. Sally Marr and Peter Dudar), Sir! No Sir! (Dir. David Zeiger) , and The Oil Factor (Dirs. Gerard Ungerman and Audrey Brohy).

There is no registration fee — attend the conference, network with other activists, and consider making a donation to Students and Educators to Stop the War.