On May Day 1971, in Washington DC during the May Day antiwar demonstrations that brought hundreds of thousands of activists to shut down the city, Stew Albert and Judy Gumbo stood on the steps of the U.S. capitol.  The capitol building had been bombed just two months before by Weather Underground, after the U.S. invasion of Laos.

With painted faces, they famously proclaimed merrily, forcefully, and courageously, “We didn’t do it but we dug it!”

And despite threats of indictments and of actual grand jury subpoenas, of being followed and tapped and spied upon, Stew and Judy’s car had the license plate acronym: CAPBOM.

Here as always, Stew’s message was the politics of solidarity.  He almost invented the art.

For Stew, for Judy, and for their adored daughter Jessica, the notion of principled solidarity was always horizontal, never vertical.  It was always generous, “a kind spirit,” as Stew would say.

It was embracing large, genuinely enjoyed, an intrinsic part of liberation.

What Stew lived is what Franz Fanon called “the battle for reciprocal recognition.”  It is the core of revolutionary politics.  It assumes the oneness of humanity.

For example, the Zapatistas say to Norte Americanos:

If you come to Chiapas to help us, go back home

If you come to join us, stay.

The politics of solidarity, of reciprocal recognition, is Rachel Corrie.

The politics of solidarity is Stew’s transforming alliance with the Black Panther Party, the Yippie/Panther pact.

It is The Sixties Papers, which Stew and Judy edited and promoted as a resource of the words of activists themselves, at the time, not whitewashed or re-remembered.  It is much like Hal Jacobs‘ book on Weather.  Not with the edges sanded off.

The blond boy from Brooklyn led defiant campaigns of non-cooperation, soliloquies against the war, blocking troop trains with the Vietnam Day Committee, where he learned his love of the mass movement.

Stew was smart and thoughtful and deeply well read as well as deeply red.

He speaks truth to power.  His actions mocked the fact free zoneof Nixon and the powerful, much like Stephen Colbert‘s no fact zone of today’s Bush regime: “I give people the truth, unfiltered by rational argument.”

Stew led the humor patrol, the parade of clowns, the insistence on the ridiculous, and on ridicule, the pranksters with Imagination and Irony.  It was a marriage of surrealism & radical politics.

The yippies and Weather Underground were kissing cousins, sharing a confrontational energy and a fondness for guerilla agit prop.  Devoted to disturbing, disrupting, defying the taken-for-granted.

But they were funnier.  And more fun.

They also had brains.

The newly revived SDS today has a virtual national office, but the youth international party was an imaginary organization.  They provided the leadership of inspiration, not bureaucracy.

Stew and Judy are celebratory existential politics, radical & original.  They exemplified imagination.  And if you cannot imagine it to be other, there is no revolution possible.

They specialized in participatory mystique, andmyth, unified by risk, drama, and zest.

Stew’s pranks included: throwing money down into the Stock Exchange, running Pigasus for President, levitating the Pentagon, running for Sheriff of Alameda County as did Brian Flanagan in Chicago, and staging the Chicago 7 Conspiracy Trial.

He re-invented the media underground, and used it to promote solidarity, and (another Stew special) Soulful socialism. 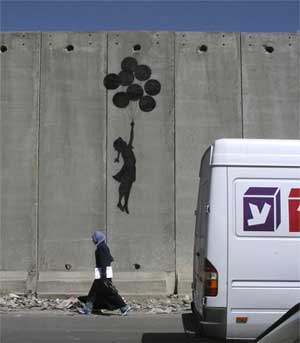 He is the godfather to the World Social Forum, to Seattle and Tiananmen, to anarchists, and anti-military recruiters and sweatshop activists, and Cindy Sheehan and Camp Casey creators, and the massive immigrants’ rights demonstrators.  Stew is uncle to the yippie artists in Palestine who painted a woman on the Israeli wall at the overcrowded checkpoint near Ramallah at Qualandiya, a larger-than-life girl holding balloons above her head and rising up the wall, levitating, transcending the wall and the sorrows it represents. . . .

Like Walt Whitman who wrote, “I sound my barbaric yawp over the roofs of the world. . . ,”  Stew was singing radical thoughts over the rooftops, embracing the world.  Like Whitman, Stew was large . . . he relished, and he genuinely enjoyed.