In today’s world, the US government’s use of torture and complicity in its clients’ use of it is part of the headlines on a regular basis.  Yet very few US citizens believe that methods like waterboarding, beating, and electrical shocks could be — and have been — used on US citizens.  Indeed, revelations concerning US agents’ treatment of Jose Padilla as a so-called enemy combatant barely made the news.  Of course, there are those in this country who see nothing wrong with torturing supposed enemies if doing so can extract “information,” even though intelligence experts have repeatedly said that information extracted through torture is usually unreliable, if not just plain false.  What is more shocking, though, is that there are large numbers of US citizens who are upset that their government is torturing people in their name, yet they are doing nothing to stop it, either out of fear or apathy or a sense of impotence.

Legacy of Torture, recently released on DVD by the Freedom Archives of Oakland, California, should shake Americans out of complacency.  The film vividly describes government criminality and three men who refuse to give in.  It is a brief report on the case of three of the fifteen Black Panther Party members who were arrested in an FBI dragnet in 1973: John Bowman, Ruben Scott, and Harold Taylor in New Orleans.  The arrests were supposedly in connection with the shooting deaths of two San Francisco police officers in 1971.  Two officers flown in from the San Francisco Police Department, Frank McCoy and Ed Erdelatz who were working with the FBI, would ask Bowman, Scott, and Taylor intimidating questions, hoping to get confessions.  When the three men refused to go along, McCoy and Erdelatz would leave the room.  The men were then tortured by New Orleans officers.  This went on for days.

Listening to Bowman and Taylor describe their ordeal is still difficult, even more than three decades after the torture.  Forcing the men to strip down to their underwear, police placed plastic bags tightly over the men’s heads and beat them with an enhanced form of a blackjack known as a slapjack.  Electrical cattle prods were used on the men’s genitals, anuses, and necks.  One of the interviewees can barely hold back tears as he recalls the details of his torture.

Eventually, wanting to end the torture, the three men agreed to confess to the police murders, even though they continue to insist to this day that they were innocent.  In 1975, a federal court in San Francisco threw out all of the evidence extracted during the New Orleans torture sessions, effectively setting the men free. 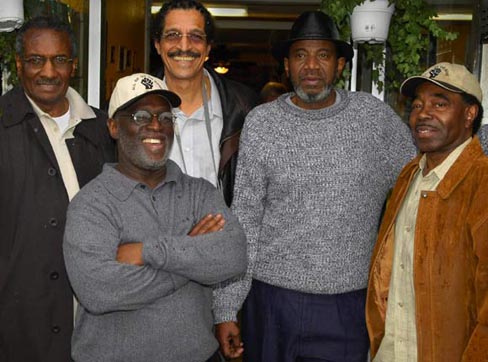 So, why this film now?  It’s a little hard to believe, but in 2003 the two SFPD investigators in the original case, McCoy and Erdelatz, were deputized by the federal government and began investigating the 1971 killings along with the FBI.  They were also investigating the Panthers’ linkages with the Weather Underground.  This time around, they were working as part of a grand jury investigation.  When that grand jury ran its course, the State of California opened another one.  Five former Panthers were called before the panel.  All five refused to testify.  Consequently, they were sent to jail until the grand jury investigation ended.  They were released on October 31, 2005.  This film is an introduction to their story and a call to support these men and other activists currently being investigated in what can only be described as fishing expeditions.  FBIWitchHunt.com, set up to provide information and garner support for the folks who have become the victims of the expeditions, lists four ongoing grand juries focusing on issues related to animal liberation, medical marijuana, protests against the G8 in San Francisco, and the so-called Green Scare investigations having to do with alleged Earth Liberation Front activities.  The Black Panther investigation is not terminated — it’s merely on hold.

As John Bowman says in the film: “The same people who tried to kill me in 1973 are here today, 2005, trying to destroy me. . . .”  Richard Brown adds: “I will never cooperate with these people. . . .  They are the criminals for what they did in New Orleans.”  Ray Boudreaux puts this in a larger perspective by noting that “The climate in the country is much like it was in the ’70s.  It’s designed to squash any form of dissent.  If you’re not going along with the program you’re a problem. . . .  We’re not going to cave in to this.”

So, what can we do?  It is not enough to be upset about this kind of government crime committed in our name.  Do something.  Remember what Martin Niemöller said about the Nazis in Germany.

When the Nazis came for the communists,

I was not a communist.

When they locked up the social democrats,

I was not a social democrat.

When they came for the trade unionists,

I did not speak out;

I was not a trade unionist.

When they came for me,

there was no one left to speak out.