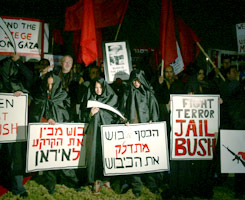 Several hundred Hadash (Equality and Peace Front) and Communist Party of Israel activists participated in an anti-Bush demonstration in front of the American Consulate in West Jerusalem.  They reached the site on foot due to the checkpoints and massive streets closures in the city, designed to facilitate the movement of Bush’s convoy.  Hadash Chairman and member of the CC of the CPI, Mohammed Barakeh said during the demonstration that “Bush totally and blindly adopts Israel’s most extreme positions and prevents progress toward a final-status agreement.  Without international pressure on the government of Israel, there won’t be progress in the peace process.”