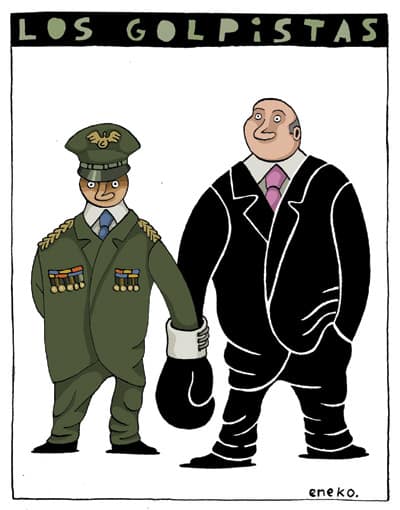 Eneko Las Heras, born in Caracas in 1963, is a cartoonist based in Spain.  This cartoon was published on his blog . . . Y sin embargo se mueve on 1 July 2009.  Honduran President Manuel Zelaya Rosales was overthrown by the US-backed military coup of 28 June 2009.  “During the six months of the Micheletti dictatorship [installed by the coup], some 4,200 human rights violations were documented, more than 40 members of the anti-coup resistance were murdered, five youth were massacred during peaceful marches, and over 3,000 were detained. . . .  Since Lobo’s inauguration [after the demonstration elections of 29 November 2009], social organizations have documented more than 700 politically motivated assaults, including the murders of 12 popular leaders and 9 journalists” (“Honduras está sumida en su peor crisis a un año del golpe de Estado,” TeleSur, 28 June 2010.).  Translation by Yoshie Furuhashi (@yoshiefuruhashi | yoshie.furuhashi [at] gmail.com).

Washington Elite Still Don’t Get Latin America — Will They Ever?
Climate Crisis: A Symptom of the Development Model of the World Capitalist System