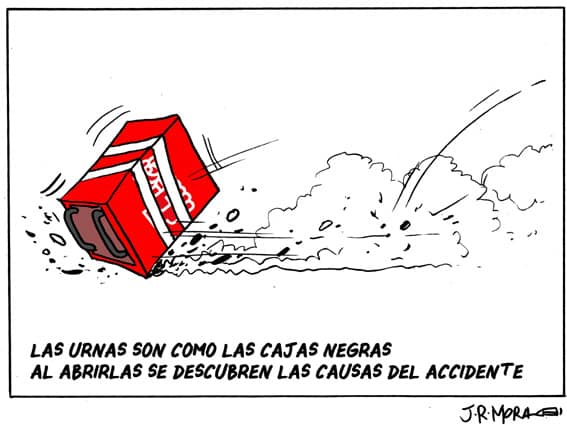 Ballot boxes are like black boxes.
Upon opening them you’ll discover the causes of the accident.

Juan Ramón Mora is a cartoonist in Barcelona.  This cartoon was first published in his blog on 22 May 2011 under a Creative Commons license.  Cf. <resultados2011.mir.es/99MU/DMU99999TO_L1.htm>; <resultados-elecciones.rtve.es/municipales/>; and “More revealing perhaps, however, is to examine votes relative to the total population.  Upon examining the results in this way, we can say that out of every 100 citizens more than half (54) did not choose to support any party: some (27) because they couldn’t vote; others (25) because they didn’t want to; 2 cast blank or null votes.  Only 18 voted for the People’s Party, 13 for the Spanish Socialist Workers’ Party; 3 for the United Left; 2 for the Convergence and Union Party and the Republican Left of Catalonia; etc.  As we can see, this ‘overwhelming majority’ of the People’s Party with which they attempt to confuse us does not amount to even 20% of the population (24% if we count only those who have the right to vote)” (José Daniel Fierro, “Tras la jornada electoral todo continúa igual,” Rebelión, 23 May 2011).  Translation by Yoshie Furuhashi (@yoshiefuruhashi | yoshie.furuhashi [at] gmail.com).