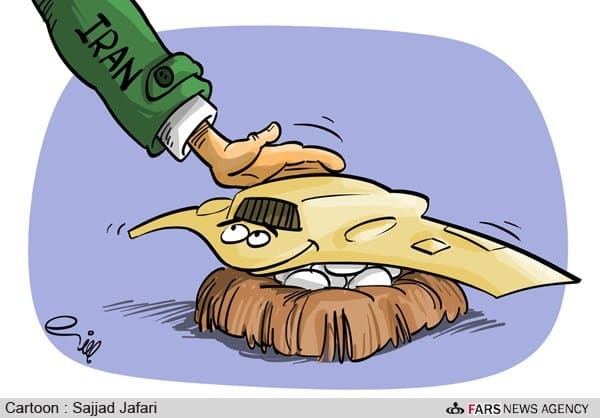 Sajjad Jafari is an Iranian cartoonist.  This cartoon was first published by Fars News, reproduced here for non-profit entertainment purposes. Cf. “The number of [scientific] publications from Iran has grown from just 736 in 1996 to 13,238 in 2008 — making it the fastest growing country in terms of numbers of scientific publications in the world.  In August 2009, Iran announced a ‘comprehensive plan for science’ focused on higher education and stronger links between industry and academia.  The establishment of a US$2.5 million centre for nanotechnology research is one of the products of this plan.  Other commitments include boosting R&D investment to 4% of GDP (0.59% of GDP in 2006), and increasing education to 7% of GDP by 2030 (5.49% of GDP in 2007)” (footnotes omitted, Knowledge, Networks and Nations: Global Scientific Collaboration in the 21st Century, London: The Royal Society, 2011).