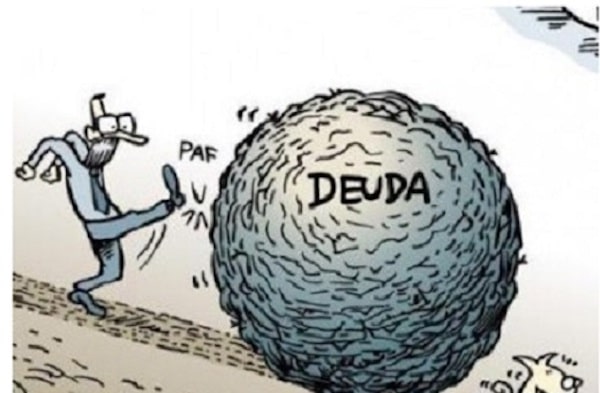 Venezuela has partly defaulted. How did it come to this?

Venezuela is an emblematic case of the infernal cycle that Latin America has been struggling with over the last two centuries. It all began in 1810, when Simon Bolivar, a figurehead of the Spanish colonies in their fight for freedom, began borrowing from London in very unfavourable conditions to finance the wars of independence.

Since then, the same pattern has been reproduced over and over again in the region. Each time States become indebted by using their natural resources as warranty or by paying off their loans with part of the revenue from these resources.

While prices of raw materials are high, as they were between 2003 and 2014, the conditions imposed by the creditors are bearable. But once the prices crash, States find themselves in trouble, at the mercy of their creditors, which is what happened to Venezuela.

Might it not be the fault of the leaders who, in Venezuela and Argentina, did not make sufficient use of the prosperous years to diversify the economy?

It might indeed. The other constant in the scenario observed over the last two centuries is the signature of unfavourable free-trade agreements. Each time the local elites have an interest in keeping their country under the creditors’ thumb, as they also invest in their country’s external debt and thus have no wish to see it repudiated.

In Venezuela, some of the present elite have acquired, as happened in the 19th century, State-issued bonds denominated in dollars, but bought for bolivars. The bonds are then sold back to the United States which enables the bearers to obtain dollars in cash. Some then spend the dollars in Venezuela on the black-market, where the exchange rate is very unfavourable to the population.

You propose the repudiation of illegitimate debt as a solution. Would not a country that refused to honour its repayments risk being excluded from the finance markets?

That is what bankers like to argue. However history shows that it is not so. When a country repudiates its debts, the slate is wiped clean. The economy gets going, and usually new bankers come thronging to the door, eager to lend to the country where they see an opportunity to make money.

This was what happened in 1867, for Mexico or in 1917, for Russia. After the revolution, the Soviet authorities refused to honour debts contracted by the Tsar with several Western countries. France protested vigorously, all the more since 1.6 million French residents held Russian bonds. Negotiations broke down in 1922. Yet shortly afterwards, the United Kingdom, Italy, the Weimar Republic and finally France began once again to make commercial loans to the Soviets, to enable them to finance their imports. The competition is so intense among lenders that countries which have repudiated their debts are never deprived of finance for long.

But after defaulting in 2001, Argentina was unable to borrow on the world market for over ten years!

That was different: having suspended debt payments to banks and the Paris Club in 2001, Buenos Aires could afford to do without the money markets. The country had a period of strong growth, on the back of the raw materials boom. Mauricio Macri’s government which came into power in 2015 chose to go back to the markets. The country could well have managed without, if Latin America had succeeded in establishing a true Bank of the South which would have offered alternative financing to that of the IMF (International Monetary Fund) and international investors.

Your Committee fights against odious debt. Where, today, can debt matching that description be found?

The jurist Alexander Nahum Sack (1890-1955) –a Russian-American— gave a definition in 1927: a debt is odious if it has been contracted against the general interest of a country’s population and if the creditors were aware of this, or should have been.

The debt contracted by Greece from 2010 on towards Eurozone countries including France, the IMF and the European Central Bank meets these criteria.

The loans were not contracted in the interests of the Hellenic people but in those of foreign banks exposed in Greece.

Moreover, they were conditioned upon the application of reforms which violated the Greeks’ fundamental economic and social rights as regards access to healthcare, housing and education.
Athens would do well to repudiate that debt.

But it also happens that the loans made by the Eurozone are the money of European taxpayers!

Take the case of France. In 2010, Paris granted Greece a bilateral loan, to be repaid as of 2022. So any repudiation would have no effect before that date. There is time to consult the people of France, after an audit, so that the public could be enlightened. This loan, presented at the time as indispensable to save the Eurozone, has also enabled Greece to repay its main private creditors, including French banks.

It would be a good thing to bring all this out into the open.