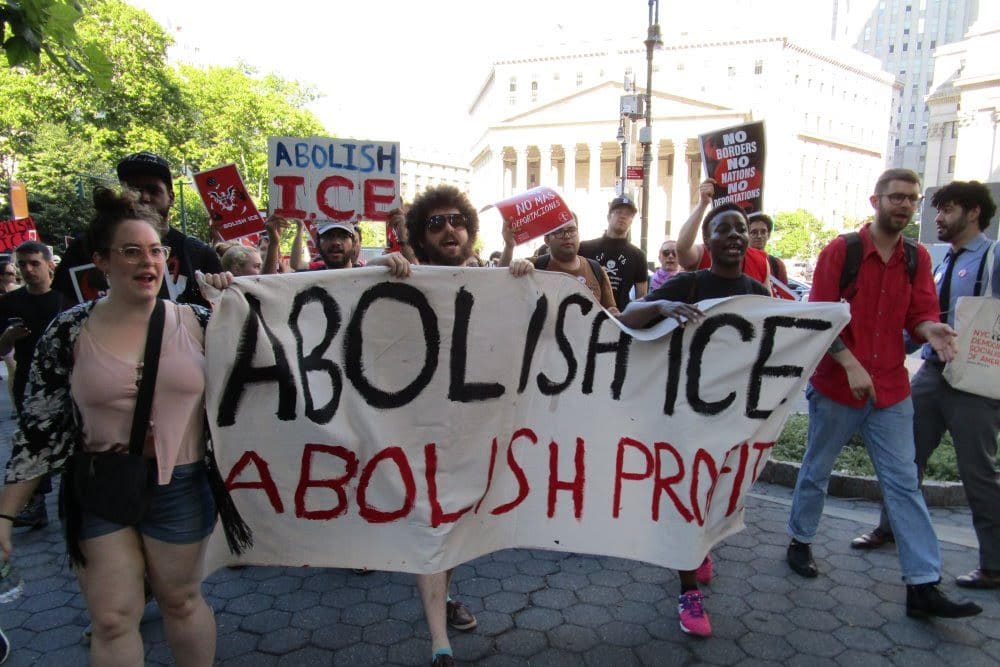 Over the past few months immigrant rights activism has come to be defined largely by a demand to “abolish ICE.” The drive to close down Immigration and Customs Enforcement—a Department of Homeland Security agency responsible for internal enforcement of immigration laws—has figured in headlines, garnered support from activists and a few Democratic politicians, and provoked furious denunciations from conservatives. But despite the attention there seems to be little agreement on what’s meant by the phrase, or on how to turn it into a reality.

Writer and researcher Sean McElwee has been promoting “#AbolishICE” as a hashtag since February 2017, but his formulation remains nebulous: the slogan is “a mandate to envision an immigration system centered on dignity,” he wrote in an August 4 op-ed. Republican leaders have been equally vague, even though they’ve claimed their opposition to ending ICE would be a major issue in the midterm elections. Senate Majority Leader Mitch McConnell (R-Kentucky) delivered an opening salvo on June 27, but it wasn’t clear whether he actually knows what ICE is: the senator said the Democrats were trying “to get rid of…the border enforcement agency,” apparently confusing ICE with Customs and Border Protection, a separate branch of Homeland Security.

In contrast to these sweeping assertions, the only legislative proposal offered so far, by Representative Mark Pocan (D-Wisconsin), would do little to change the immigration system. Pocan’s bill would simply sunset ICE in a year and move its operations to other agencies—hardly the sort of “abolition” activists are looking for.

What’s surprising about all this is that aside from an informative Nation article, media outlets have paid little attention to reactions from immigrant-based organizations—for example, an important policy platform issued in June by Mijente—or to the relation of “abolish ICE” to the movement’s historic demands. And two of these demands provide a basis for actually closing the agency, and beyond that for building a movement to demand more fundamental changes.

ICE’s main division is Enforcement and Removal Operations (ERO). According to the description on ICE’s website, ERO “identifies and apprehends removable aliens, detains these individuals when necessary and removes illegal aliens from the United States.” In other words, ICE’s basic mission is arresting, imprisoning, and deporting some 12 million U.S. residents who have violated, often unknowingly, some aspect of the country’s complex immigration laws. This group includes the majority of the 11 million immigrants who have been living here without legal status—about three-quarters of them for more than ten years—and possibly as many as 1 million green card holders the government classifies as “criminal aliens.”

ERO’s functions are the focus of two demands that immigrant rights activists have been organizing around for the past 20 years: a “general amnesty” for undocumented immigrants and what activists call “Fix ’96.”

The general amnesty would be a program, modeled on part of the 1986 Immigration Reform and Control Act (IRCA), allowing undocumented immigrants who have resided in the country for a certain number of years to apply for green cards, and eventually for citizenship. The program would shield the great majority of the undocumented population from deportation, including the approximately 1 million people currently covered by two other programs: Temporary Protected Status (TPS) and Deferred Action for Childhood Arrivals (DACA). (The administration is trying to phase out protections for most TPS beneficiaries over the next two years, and it has been working for a full year to end DACA.)

Here the model could be a 2016 House resolution introduced by Representative Raúl Grijalva (D-Arizona) calling for reform or repeal of sections of the two laws that reduced due process safeguards against arbitrary detention and deportation, limited judicial discretion and review in immigration cases, set up prohibitive barriers for immigrants seeking legal status, and drastically expanded the list of infractions for which a legal permanent resident could be deported. Fix ‘96 would both restore options for undocumented residents to regularize their status and protect many of the legal residents currently subject to deportation because of minor criminal convictions.

If the immigrant rights movement won these two demands, ICE would lose most of its excuse for existing. Whatever useful functions it might still have—if any—could be moved to other government offices.

People will ask whether these are demands that can really be won. It’s not certain that any important legislation can make its way through the present dysfunctional Congress and a scandal-racked White House, but a forceful campaign for these reforms would be likely to win significant concessions. At the very least, it would increase popular support for immigrants’ rights—at a time when the public increasingly embraces policies once thought too radical.

Although the media have tended to treat general amnesty as a pie-in-the-sky demand, it already has broad support. A September 2017 poll by Fox News—hardly a leftist outlet—projected that 83 percent of registered voters favored “setting up a system for [undocumented immigrants working in the United States] to become legal residents.” A June 2018 poll by the Pew Research Center this June shows that favorable views of amnesty have grown over the last three years, despite—or maybe because of—the overheated ant-immigrant rhetoric from Trump and his supporters.

Fix ’96 can also win majority support, but this will require confronting widespread misconceptions about immigration.

One is the belief that undocumented immigrants have a number of options for “getting legal”—for instance, by marrying a U.S. citizen. In fact, the “adjustment of status” process was never easy, but now it’s all but impossible for most of the unauthorized population. IIRIRA instituted what is known as a  “ten-year bar” for immigrants who entered without a valid visa and have been “unlawfully present” in the United States for more than a year. Unless they can obtain a hard-to-get waiver for “extreme hardship,” these immigrants—the great majority of the undocumented population—must go abroad to start the legalization process, wait ten years, and then apply at a U.S. consulate and hope the government will eventually approve their application.

The very act of applying for a green card can now put the applicant in danger. ICE agents have reportedly been using adjustment of status interviews as a trap, detaining applicants and putting them in deportation proceedings, at offices in New England and in Florida.

Another misconception concerns the deportation of “criminal aliens.”

These are supposedly hardened criminals sent back to their home countries to make the U.S. population safe. In reality, many of the deportees are convicted of minor, nonviolent crimes. This has always been true, but the 1996 laws made the situation significantly worse. One example is the redefinition in 1996 of “aggravated felony”: as Rep. Grijalva’s resolution noted, the term now “includes petty offenses such as shoplifting, writing a bad check, or misdemeanor controlled substance offenses [and] has led to the removal of lawful permanent residents who, on average, have lived legally in the United States for 15 years.”

This isn’t to say that activists should be satisfied with rewriting the 1996 laws. Fix ‘96 would end the injustice of sending a green card holder into permanent exile for shoplifting, but it wouldn’t address the more basic injustice of deporting any non-citizen convicts after they’ve served their sentences.

The fact is that Fix ’96 and a general amnesty can’t bring about the complete overhaul the country’s unjust and anachronistic immigration system requires. Still, these are reforms that would greatly improve the lives of millions of U.S. residents if implemented. And campaigns for reforms can advance a broader progressive agenda. As Rosa Luxemburg wrote more than a century ago, “[t]he daily struggle for reforms, for the amelioration of the condition of the workers within the framework of the existing social order, and for democratic institutions, offers [socialists] the only means” for bringing about radical social change.

For example, while focusing on the injustice of deporting immigrants for minor offenses, a Fix ’96 campaign would raise crucial questions that go beyond the campaign’s limits: Is it fair to punish people twice—through imprisonment and then through exile—simply because they were born in another country? Do these deportations do anything to protect the public? More broadly, are punitive measures actually the most effective way to prevent crime?

This broader approach would open the way to building links between immigrant rights activists and the movements for prisoners’ rights and against mass incarceration. In fact, the process is already underway: dozens of immigration detainees at the Northwest Detention Center in Tacoma, Washington, participated in this year’s August 21-September 9 nationwide prison strike; in June the strike’s organizers had released a statement calling for the abolition of ICE. And this is only one of the ways in which an amnesty and Fix ’96 campaign would help link and strengthen apparently separate movements. Any effort to reform the immigration system poses questions about racism, labor exploitation, and the effects of U.S. foreign policy—questions of vital importance for working people both here and in much of the rest of the world.

The “abolish ICE” slogan has already played a notable role in energizing the immigrant rights movement. Now it’s time for activists to use it in building for far more radical transformations than just shutting down one rogue federal agency.