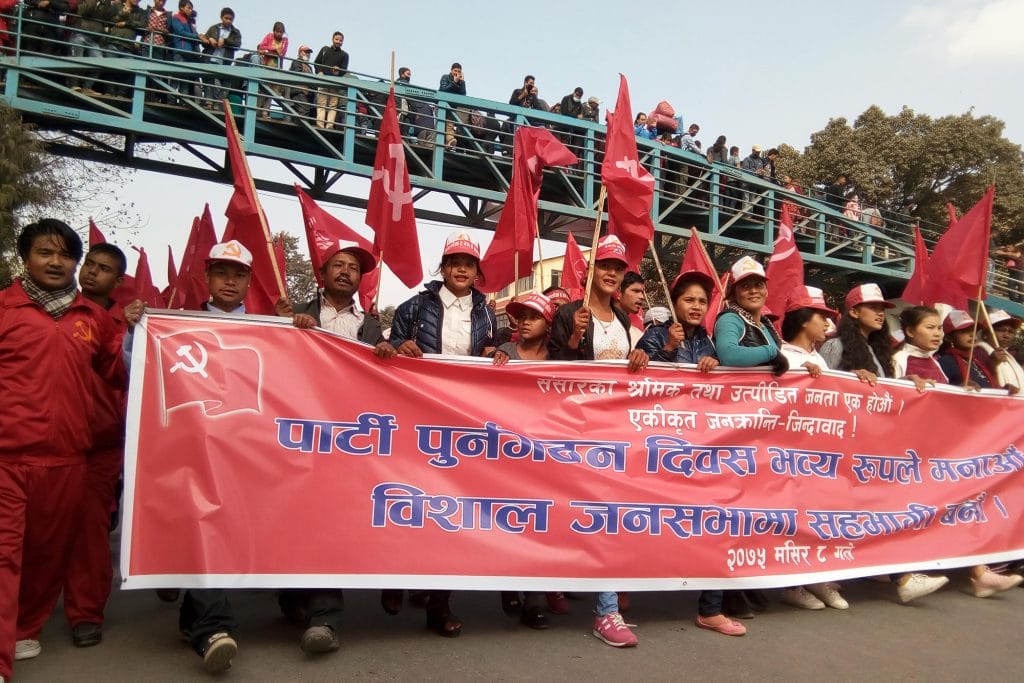 Marchers in a rally of the Biplav-led Communist Party of Nepal. Photo credit: Chris Gilbert.

A common belief is that the project of scientific socialism grows best on arid soil, barren of all myth. It is in this modern and materialist wasteland, free from all idols, that the grey owl of Marxist ideology will begin its slow flight… Whatever rational arguments exist in favor of this view, it simply does not hold up to history. In fact, socialist projects thrive most fully in contexts where ideals such as hope, loyalty, and even faith still survive. In certain situations, even the scientific nature of socialism can be converted into a very powerful myth!

If you have an uncritical attitude toward modernity, a socialist movement trading in cult-like ideals or myths will seem simply naive or even retrograde. However, as a Bolivarian Marxist and Latin American by choice, I am aware that myths such as those surrounding Che Guevara, Hugo Chávez and, of course, Simón Bolívar are not so much liabilities as assets for left movements. It’s simply the complacency of global (capitalist) culture that makes us mistake jadedness for wisdom and confuse intellectual acuity with the inability to assume the commitments, attitudes and beliefs that could be the first fruits of the communist project.

In Nepal, where I am currently traveling to learn from its Left movements, nothing could better exemplify this kind of spiritually-rich social base than that of the communist movement led by Netra Bikram Chand (“Biplav”). Militants of this movement, which consolidated itself as a party some five years ago, wear their commitments on their sleeve. In that sense they have a great deal in common with Chavismo in its best moment. Just as we used to defy the world saying “Uh ah, Chávez no se va,” they do the same affirming “Communism will win!” and just like us in the beginning, they cannot get enough of the color red. Militants even use red pens, while at important events and rallies they replace Hindu tikas(forehead marks of colored powder) with giant red “communist” swaths on their leaders’ brows.

In Latin America such practices or rites, in so far as they are not purely rational, are often called mística. The term refers to a political movement’s sometimes ritualistic expressions of immaterial values such as morale, confidence, loyalty and hope. Is this a recent Latin American invention? Far from it. In fact, mística was quite present among the original Bolsheviks. Remember that Lenin and friends danced in their Petersburg apartments when strikes went well and that the old Lenin danced again when the October Revolution surpassed the 72-day lifespan of the Paris Commune. Both Lars Lih and China Miéville have done important work recovering the role of fantasy and faith among Russia’s early communists.

Mística’s  importance for the global left in crisis today cannot be overestimated. The political panorama in Nepal makes this especially obvious, since most of the revolutionary tendencies here trade in the same general ideas, all of them based on Marx-Lenin-Mao (M-L-M) thought. That being so, how can one party or current distinguish itself? What would make one tendency better or more authentic than the others? The short answer is that it is mostly by demonstrating commitment, honesty, and coherence in thought and action that one communist movement or current in Nepal could stand out from its rivals.

This is indeed Biplav’s communist movement’s strong suit. An excision of the main Maoist movement, they call themselves simply the “Communist Party of Nepal.” The name is barely distinguishable from that of the ruling “Nepal Communist Party,” founded by onetime supreme leader Pushpa Kamal Dahal. Yet Biplav’s party claims to be the real thing, and it aspires to bring the ruling party down!

A story about Biplav, who is half Magar and hails from the country’s underdeveloped west, sheds light on what his party offers. Half a decade ago, before his group split off, the then forty-something leader was participating in the annual celebration of the beginning of the People’s War. The event was to take place in the mountain village of Thabang, the original Maoist headquarters, and getting there involved a serious uphill climb. Biplav found the ascent easy, but a senior cadre called Badal who was walking with him got out of breath and stopped to rest. Biplav joked with Badal about how he found going uphill (“ukalo”) difficult and suggested that maybe a new, unflagging generation should take over in the Maoist movement. The senior leader became morose and silent.

Biplav’s reputation is huge these days and growing, although he makes few public appearances. It is evident that he exercises a special draw on Nepal’s youth and the young in spirit. This is hardly surprising, since Biplav’s party’s core message is that the great project that the Nepali nation once struggled for is not dead: the hope of radical change, for which tens of thousands of his countrymen sacrificed life and limb, will not be traded for thirty pieces of Kathmandu silver…

Another powerful idea that Biplav projects–perhaps it is the most powerful revolutionary myth of all time–is that he and his party are on the move, insurgent against power. The party has declared its vocation to seize state power (even if they admit that the time may not be now), meaning that both militants and masses know that the die is cast, and sooner or later everyone will have to decide if they are part of the rising tide. This is also what drew people to Chávez. The attraction was based not solely on a rational assessment of Chávez’s ideas, but also on the belief that those ideas could and would become a reality. Call it a revolutionary wager. For those of us who sensed it, it was both a challenge and an invitation.

Last week, I went to a major rally that Biplav’s party organized in Kathmandu. It lasted the whole day. From about 10 am on, waves and waves of red marchers began to fill a long street to the east of the city’s centrally-located Ratna park. The high spirits of the marchers–who were giving vivas to scientific socialism–contrasted sharply with the boredom of the black-clad riot police lulling on the margins with their lathis and guns. By midday, the street seemed full to bursting with scarlet marchers. Then, after a brief pause, twice as many more arrived and in even higher spirits. In truth, the whole event felt electric, and the militants’ enthusiasm was highly contagious.

A month before, I met with the movement’s main spokesperson, Prakanda, in the party’s Kathmandu headquarters. At my request, he gave me a detailed explanation of the party’s current program and strategy. Their analysis is that the regime installed by the ruling communist party is simply a form of “comprador parliamentarism” (a political system underpinned by and favoring Nepal’s importing bourgeoisie). Faced with this situation–which amounts to a betrayal of the original Maoist project–there is no option but to stage a new revolution: a “Unified People’s Revolution.” This new revolution will be guided by an updated M-L-M thought, and it will result in a state in which workers, peasants, and middle classes together exercise power… 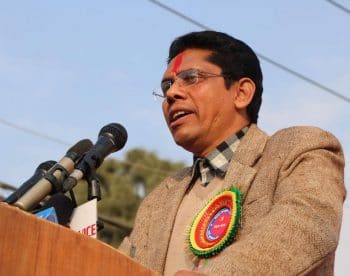 The main spokesperson for the Biplav-led Communist Party of Nepal, Prakanda, speaking at a rally.

The above is a radically abbreviated summary of a meeting that went on for over an hour. It was an encounter that moved me profoundly. But more than the contents of Prakanda’s presentation, what won me over was his total conviction and generous desire to see me and all others take part in the movement and contribute to developing its program. Throughout the meeting with this cadre–whose role as spokesperson has landed him repeatedly in prison this year–I felt that the quality of the relationship and an ethics of communist fraternity was always in the forefront.

Meeting with Prakanda and other party militants, some of whom I have come to know well, has made me painfully aware that in the Chavista movement, we have lost touch with many of these same qualities. Indeed, it’s precisely for that reason that some of us began a search about a year ago for what we call a “referente moral” (best translated as “an ethical example that guides us”). The idea is that, since the original “referente moral,” Hugo Chávez, died or was assassinated some five years ago, a new one is needed.

Is this search a good idea? From what I have seen in Nepal, I am inclined to be skeptical. I am now led to believe that once a movement such as Chavismo begins such a search, it has already strayed very far from the path. That’s because Nepal’s Biplav tendency demonstrates how an ethical spirit that permeates everything–and is not merely based on a moral referent–is really the sine qua non for a meaningful revolutionary movement. It is this spirit, reaching far beyond mere ideology and program, that is the defining mark of the movement that, in my view, most plausibly fights for communism in today’s Nepal.