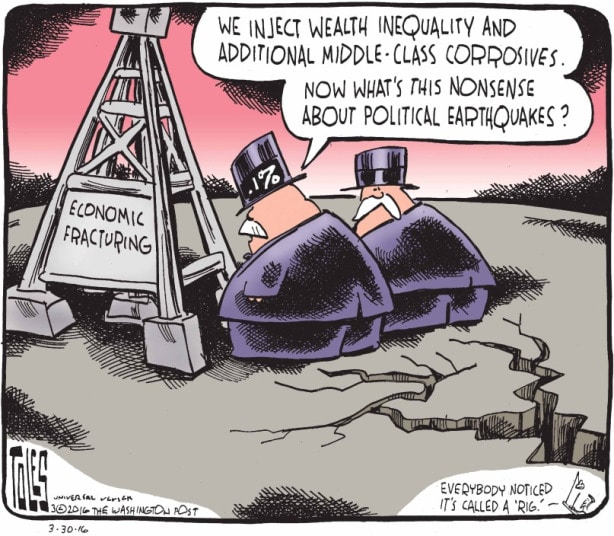 No matter how we measure it, most Americans are falling further and further behind the tiny group at the top.1

That does not mean, contra Robert Samuelson, that “the incomes of most Americans have stagnated for decades.” That’s a canard. No one makes that argument.

No, the real issue is that American workers have been producing more and more but getting only a tiny share of that increase. As I explained last year,

That’s what mainstream economists can’t or won’t understand: that workers may be worse off even as their wages and incomes rise. That problem flies in the face of every attempt to celebrate the existing order by claiming “just deserts.”

It’s what is known as relative immiseration. And it simply can’t be disputed by the alternative statistics invoked by Samuelson or Stephen J. Rose (pdf).

The exact numbers concerning the distribution of income in the United States depend, of course, on a whole host of assumptions and methodological choices, mostly involving what counts as “income.” The more categories that are included in income—starting with the traditional series (wages and salaries, dividends, interest, and rent) before and after taxes, and then including payments from government programs (such as Social Security, unemployment insurance, Temporary Assistance for Needy Families, and the earned-income tax credit), and going so far as to add employer contributions for health insurance and 401(k) retirement accounts, the employer share of the Federal Insurance Contributions Act, government noncash benefits (e.g., the Supplemental Nutrition Assistance Program, Medicare, Medicaid, and housing vouchers), housing services (homeowners paying rent to themselves) and government services (e.g., defense, education, legal system, and administration)—the less measured inequality turns out to be.

In fact, as Rose demonstrates, most of the available studies show growing inequality in the United States, with a high and rising share of income captured by the top 1 percent.2 The only real outlier is by Auten and Splinter, who merely demonstrate that it is possible for mainstream economists to make growing inequality virtually disappear with enough “massaging” of the underlying numbers.3

In the end, Samuelson himself is forced to admit,

None of this means we should stop debating inequality. Who gets what, and why, are inevitable subjects for examination in a rich democratic society. By contrast with many advanced societies, income and wealth are indisputably more concentrated in the United States.

And the problem of growing inequality is only going to get worse as we move forward, especially with ongoing automation. As David Autor explains,

Employment is growing steadily, and its growth in terms of number of jobs has not been discernibly dented by technological progress. But the sum of wage payments to workers is growing more slowly than economic value-added, so labor’s share of the pie of net earnings is falling. This doesn’t mean that wages are falling. It means that they are not growing in lock step with value-added.

That’s exactly right. Workers’ wages and middle-class incomes may continue to rise in absolute terms but their relative standing with respect to the tiny group at the top—those who are in the position of capturing the surplus—will likely worsen.

Measure by measure, the economic and social landscape is being fractured and American workers are being left behind.