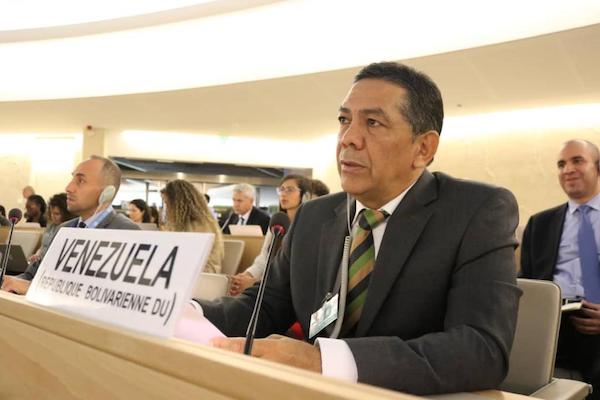 William Castillo, the vice-minister of international communication, participated in the session of the human rights commission in order to defend the truth about Venezuela. Photo: Foreign Ministry of Venezuela twitter

The United Nations High Commissioner for Human Rights Michelle Bachelet presented a report on Venezuela on July 5 in Geneva. The intention of the report, which was mandated by the Human Rights Council of the UN, was to examine the current situation of human rights in the country. The report was based on technical visits to Venezuela and more than 500 interviews.

The report has been denounced by the Venezuelan government, civil society organizations within the country, international organizations and movements, as well as by the former UN Independent Expert on the Promotion of a Democratic & Equitable International Order, Alfred de Zayas. The Venezuelan government has released a 70-point document highlighting the errors they found in the report.

The primary concern about the document is that it blames the Venezuelan government for all the problems facing Venezuela such as the political instability, lack of access to proper medicine, medical supplies and food, a decrease in funds available for social programs and political violence. At the same time, it ignores the role played by the extreme-right opposition and the U.S. government.

William Castillo, the vice-minister of international communication, participated in the session of the Human Rights Commission on Friday in order to defend the truth about Venezuela. Castillo explained that despite the cooperation and willingness shown by the Venezuelan government to meet with Bachelet and the official mission and provide documents and necessary information, the report “almost completely ignores the information provided by the state and only takes into account the voices of the opposition leaders.”

He denounced the fact that the report “ignores the grave impact of the illegal, criminal and immoral economic blockade imposed on the life of our people. Venezuela does not deny its problems but any serious effort to solve them should consider the structural causes. For the last 20 years, Venezuela has been the target of a multi-form aggression by the U.S. including attempted coup d’états, attempts of magnicide, like the one suffered by president Maduro in August 2018, sabotage to the petroleum industry and public services, paramilitary and political violence, diplomatic siege, and since 2015 a fierce blockade on our commercial and financial activities.”

The Cuban delegation also condemned the report, “We demand respect of the legitimate right of the Venezuelan people to continue building their model of a social project and we reject the use of this body and other mechanisms of human rights to give continuity to the unconventional war against Venezuela.”

María Eugenia Russián, the president of Fundalatin (the Latin American Foundation for Human Rights and Social Development), also participated in Friday’s session on behalf of Venezuelan NGOs and civil society organizations that met with Michelle Bachelet during her visit. She echoed the dismay felt by many that the reports of the 12 NGOs were ignored in the OHCHR report.

She specifically highlighted the complete erasure of the victims of right-wing mob violence. In March, Inés Esparragoza told Bachelet the story of her 20-year-old son Orlando Figuera who in May 2017 was beaten, doused with gasoline and burned alive by an opposition mob in an anti-government riot. Her story and the stories of many others from the Committee of Guarimba Victims (guarimba refers to the violent anti-government protests) who themselves were victims of the violence or had lost loved ones, were not mentioned in the report. Russián said that “unfortunately the hope of these victims was let down by her [Bachelet’s] office.”

In 2014, 43 citizens were killed by right-wing opposition mobs and in 2017, 120 were killed, with several high-profile cases of grotesque public lynchings of Chavistas, working class and darker skinned people.

The Venezuelan Network of Human Rights also released a statement lamenting that their information and reports about human rights violations were completely excluded and ignored from Bachelet’s report.

Is it Maduro’s fault that Venezuela is unstable?

On the issue of political stability, the report by the Office of the High Commissioner for Human Rights (OHCHR) focuses on how the Bolivarian government has supposedly eroded the rule of law in the country and closed democratic spaces of participation. First, it is necessary to point out how the Bolivarian government of Venezuela is unique in the region and the world for attempting to break away from the bourgeois democratic system and work actively to encourage the direct political participation of communities through bodies like communal councils.

Second, it is hard to talk about the political climate in the country without mentioning the slew of attempted coup d’états and the foiled attempts to assassinate the president Nicolás Maduro. Yet, the OHCHR manages to do so! The attempts by the U.S.-backed right-wing opposition to destabilize the country and overthrow Maduro’s government intensified after Juan Guaidó, the president of the National Assembly, declared himself “interim president” on January 23.

Since then, Guaidó has led a series of media charades in order to bring Venezuela to a tipping point. These include an ‘ultimatum’ on the entry of U.S. ‘humanitarian’ aid at the Venezuela-Colombia border in Cúcuta, a mobilization near an airbase and a public call to members of the armed forces to defect and support him in April. In the past several months Guaidó has also repeatedly asked the U.S. to support his claim to power with military intervention and U.S. officials have affirmed that “the military option is not off the table.”

Meanwhile, Venezuelan intelligence entities have dismantled several right-wing cells that had been planning to carry-out assassinations of government officials and social and political Chavista leaders.

Though these actions have not achieved their end goal, they have still had tremendous repercussions on the well-being of the Venezuelan people. The constant threat of military intervention and regime change do not create an environment of safety and security for the Venezuelan people. As former UN independent expert Zayas put it, “There is nothing more undemocratic than a coup.”

The report’s section on economic and social rights discusses how the Venezuelan population currently is unable to access adequate food and healthcare. It highlights several key areas of concern with regard to the declining access to these essential services and rights, but again points fingers at the Government.

The Venezuelan government has long been denouncing to the international community, even to the same human rights committee, that the economic sanctions slapped on Venezuela since 2015 by the U.S. government have drastically impacted its ability to import sufficient food and medicine to sustain its population. The freezing of Venezuelan assets by the U.S. government and several international financial institutions, coupled with the decline in oil production due to the sanctions, has meant that the government does not have the same access to funds that it used to in order to import these necessities. Furthermore, even when it does have the funds, their payment methods for international transactions to buy such crucial supplies have been restricted and blocked.

According to a report released by the Center for Economic and Policy Research (CEPR) in April 2019, around 40,000 people died from 2017 to 2018 due to the sanctions. The sanctions have especially restricted access to buying food and medical supplies.

The glaring omission of the dire impact of the economic sanctions is incomprehensible. Castillo, during his address on Friday, requested that Michelle Bachelet “in agreement with the UN resolutions on unilateral coercive measures, demand an immediate end to the blockade.