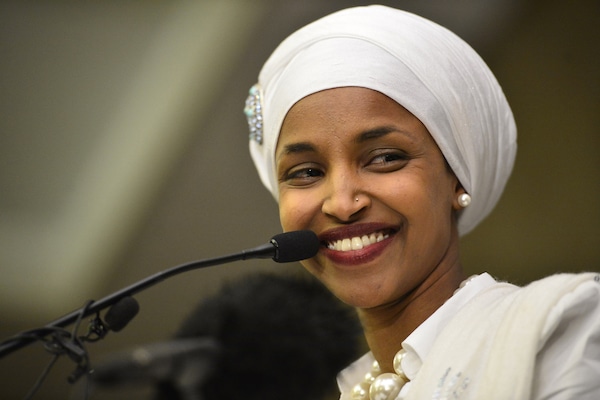 On January 5, Rep. Ilhan Omar (D-MN) and Rep. Barbara Lee announced that they are introducing a War Powers Resolution in the House. The legislation would remove U.S. forces from any conflict with Iran that hasn’t been granted congressional approval and is a companion to a Senate resolution that was introduced by Sen. Tim Kaine (D-VA) two days prior.

“‪Let’s not mince words: the assassination of Qasem Soleimani was an act of war undertaken without Congressional authorization, in violation of the Constitution of the United States of America,” said Omar in a statement,

Following the assassination, thousands of additional troops were sent to the Middle East in one of the largest rapid deployments seen in decades. This follows years of saber-rattling and threats of war against Iran by President Trump and his accomplices. We in Congress must exercise our Constitutional duty—and do everything in our power to stop another disastrous war.

I am introducing a War Powers Resolution in the House with @BLeeforCongress to prevent an illegal war with Iran.

We must not allow this President to send our men and women into harm’s way without Congressional authority. https://t.co/8OSkZYRXu8

Lee, who was the only member of congress to vote against war on Afghanistan in 2001, released a similar statement. “For far too long, Congress has been missing in action on matters of war and peace,” it reads,

Make no mistake: the assassination of Qasem Soleimani places us on the brink of war with Iran. Trump’s reckless military actions, without Congressional approval or authorization, have caused this crisis. We have been down this dangerous path before in Iraq, and we cannot afford another ill-advised, destructive, and costly war in the Middle East. It’s past time for Congress to reassert our Constitutional authority and return to diplomacy with Iran and our allies.

On the same day that Omar and Lee announced the legislation, Speaker of the House Nancy Pelosi (D-CA) indicated that a War Powers vote could be taken up this week. “Last week, the Trump Administration conducted a provocative and disproportionate military airstrike targeting high-level Iranian military officials,” she wrote to fellow Democrats in a letter,

This action endangered our service members, diplomats and others by risking a serious escalation of tensions with Iran. As Members of Congress, our first responsibility is to keep the American people safe.  For this reason, we are concerned that the Administration took this action without the consultation of Congress and without respect for Congress’s war powers granted to it by the Constitution.

Any member who voted for the NDAA — a blank check — can't now express dismay that Trump may have launched another war in the Middle East.

My Amendment, which was stripped, would have cut off $$ for any offensive attack against Iran including against officials like Soleimani /1

Earlier this year, Rep. Ro Khanna (D-CA) and Rep. Matt Gaetz (R-FL) attempted to tack an amendment onto the National Defense Authorization Act (NDAA) that would have prohibited the Trump administration from using federal money to attack Iran without congressional approval. The amendment was ultimately omitted from the final version of the NDAA. “Any member who voted for the NDAA—a blank check—can’t now express dismay that Trump may have launched another war in the Middle East,” tweeted Khanna after the assassination,

My Amendment, which was stripped, would have cut off $$ for any offensive attack against Iran including against officials like Soleimani.