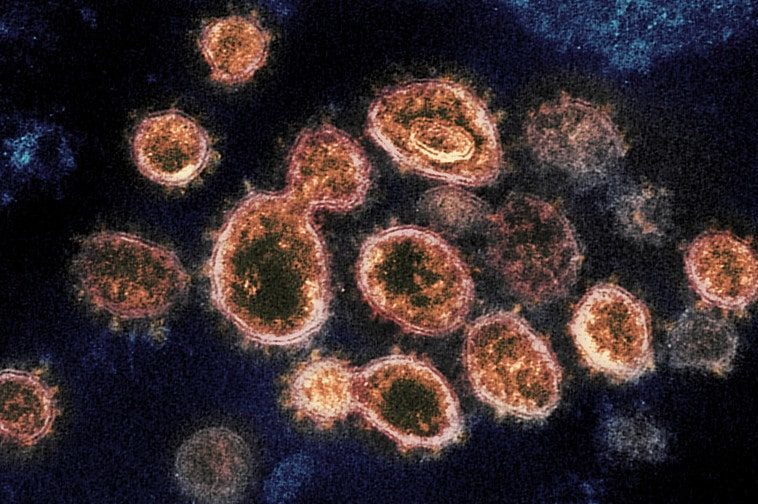 Novel Coronavirus SARS-CoV-2, NIH image gallery. This transmission electron microscope image shows SARS-CoV-2, the virus that causes COVID-19, isolated from a patient in the U.S. Virus particles are shown emerging from the surface of cells cultured in the lab. The spikes on the outer edge of the virus particles give coronaviruses their name, crown-like. Credit: NIAID-RML.

COVID-19 is finally the monster at the door. Researchers are working night and day to characterize the outbreak but they are faced with three huge challenges.

First the continuing shortage or unavailability of test kits has vanquished all hope of containment. Moreover it is preventing accurate estimates of key parameters such as reproduction rate, size of infected population and number of benign infections. The result is a chaos of numbers.

There is, however, more reliable data on the virus’s impact on certain groups in a few countries. It is very scary. Italy and Britain, for example, are reporting a much higher death rate among those over 65. The ‘corona flu’ that Trump waves off is an unprecedented danger to geriatric populations, with a potential death toll in the millions. 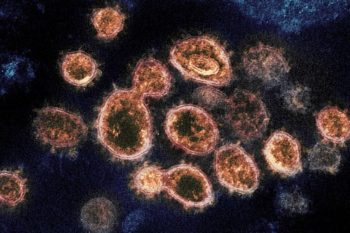 Novel Coronavirus SARS-CoV-2, NIH image gallery. This transmission electron microscope image shows SARS-CoV-2, the virus that causes COVID-19, isolated from a patient in the U.S. Virus particles are shown emerging from the surface of cells cultured in the lab. The spikes on the outer edge of the virus particles give coronaviruses their name, crown-like. Credit: NIAID-RML.

Second, like annual influenzas, this virus is mutating as it courses through populations with different age compositions and acquired immunities. The variety that Americans are most likely to get is already slightly different from that of the original outbreak in Wuhan. Further mutation could be trivial or could alter the current distribution of virulence which ascends with age, with babies and small children showing scant risk of serious infection while octogenarians face mortal danger from viral pneumonia.

Third, even if the virus remains stable and little mutated, its impact on under-65 age cohorts can differ radically in poor countries and amongst high poverty groups. Consider the global experience of the Spanish flu in 1918-19 which is estimated to have killed 1 to 2 per cent of humanity. In contrast to the corona virus, it was most deadly to young adults and this has often been explained as a result of their relatively stronger immune systems which overreacted to infection by unleashing deadly ‘cytokine storms’ against lung cells. The original H1N1 notoriously found a favored niche in army camps and battlefield trenches where it scythed down young soldiers down by the tens of thousands. The collapse of the great German spring offensive of 1918, and thus the outcome of the war, has been attributed to the fact that the Allies, in contrast to their enemy, could replenish their sick armies with newly arrived American troops.

It is rarely appreciated, however, that fully 60 per cent of global mortality occurred in western India where grain exports to Britain and brutal requisitioning practices coincided with a major drought. Resultant food shortages drove millions of poor people to the edge of starvation. They became victims of a sinister synergy between malnutrition, which suppressed their immune response to infection, and rampant bacterial and viral pneumonia. In another case, British-occupied Iran, several years of drought, cholera, and food shortages, followed by a widespread malaria outbreak, preconditioned the death of an estimated fifth of the population.

This history—especially the unknown consequences of interactions with malnutrition and existing infections—should warn us that COVID-19 might take a different and more deadly path in the slums of Africa and South Asia. The danger to the global poor has been almost totally ignored by journalists and Western governments. The only published piece that I’ve seen claims that because the urban population of West Africa is the world’s youngest, the pandemic should have only a mild impact. In light of the 1918 experience, this is a foolish extrapolation. No one knows what will happen over the coming weeks in Lagos, Nairobi, Karachi, or Kolkata. The only certainty is that rich countries and rich classes will focus on saving themselves to the exclusion of international solidarity and medical aid. Walls not vaccines: could there be a more evil template for the future?

A year from now we may look back in admiration at China’s success in containing the pandemic but in horror at the USA’s failure. (I’m making the heroic assumption that China’s declaration of rapidly declining transmission is more or less accurate.) The inability of our institutions to keep Pandora’s Box closed, of course, is hardly a surprise. Since 2000 we’ve repeatedly seen breakdowns in frontline healthcare.

The 2018 flu season, for instance, overwhelmed hospitals across the country, exposing the shocking shortage of hospital beds after twenty years of profit-driven cutbacks of in-patient capacity (the industry’s version of just-in-time inventory management). Private and charity hospital closures and nursing shortages, likewise enforced by market logic, have devastated health services in poorer communities and rural areas, transferring the burden to underfunded public hospitals and VA facilities. ER conditions in such institutions are already unable to cope with seasonal infections, so how will they cope with an imminent overload of critical cases?

We are in the early stages of a medical Katrina. Despite years of warnings about avian flu and other pandemics, inventories of basic emergency equipment such as respirators aren’t sufficient to deal with the expected flood of critical cases. Militant nurses unions in California and other states are making sure that we all understand the grave dangers created by inadequate stockpiles of essential protective supplies like N95 face masks. Even more vulnerable because invisible are the hundreds of thousands of low-wage and overworked homecare workers and nursing home staff.

The nursing home and assisted care industry which warehouses 2.5 million elderly Americans—most of them on Medicare—has long been a national scandal. According to the New York Times, an incredible 380,000 nursing home patients die every year from facilities’ neglect of basic infection control procedures. Many homes—particularly in Southern states—find it cheaper to pay fines for sanitary violations than to hire additional staff and provide them with proper training. Now, as the Seattle example warns, dozens, perhaps hundreds more nursing homes will become coronavirus hotspots and their minimum-wage employees will rationally choose to protect their own families by staying home. In such a case the system could collapse and we shouldn’t expect the National Guard to empty bedpans.

The outbreak has instantly exposed the stark class divide in healthcare: those with good health plans who can also work or teach from home are comfortably isolated provided they follow prudent safeguards. Public employees and other groups of unionized workers with decent coverage will have to make difficult choices between income and protection. Meanwhile millions of low wage service workers, farm employees, uncovered contingent workers, the unemployed and the homeless will be thrown to the wolves. Even if Washington ultimately resolves the testing fiasco and provides adequate numbers of kits, the uninsured will still have to pay doctors or hospitals for administrating the tests. Overall family medical bills will soar at the same time that millions of workers are losing their jobs and their employer-provided insurance. Could there possibly be a stronger, more urgent case in favor of Medicare for All?

But universal coverage is only a first step. It’s disappointing, to say the least, that in the primary debates neither Sanders or Warren has highlighted Big Pharma’s abdication of the research and development of new antibiotics and antivirals. Of the 18 largest pharmaceutical companies, 15 have totally abandoned the field. Heart medicines, addictive tranquilizers and treatments for male impotence are profit leaders, not the defenses against hospital infections, emergent diseases and traditional tropical killers. A universal vaccine for influenza—that is to say, a vaccine that targets the immutable parts of the virus’s surface proteins—has been a possibility for decades but never a profitable priority.

As the antibiotic revolution is rolled back, old diseases will reappear alongside novel infections and hospitals will become charnel houses. Even Trump can opportunistically rail against absurd prescription costs, but we need a bolder vision that looks to break up the drug monopolies and provide for the public production of lifeline medicines. (This used to be the case: during World War Two, the Army enlisted Jonas Salk and other researchers to develop the first flu vaccine.) As I wrote fifteen years ago in my book The Monster at Our Door: The Global Threat of Avian Flu:

Access to lifeline medicines, including vaccines, antibiotics, and antivirals, should be a human right, universally available at no cost. If markets can’t provide incentives to cheaply produce such drugs, then governments and non-profits should take responsibility for their manufacture and distribution. The survival of the poor must at all times be accounted a higher priority than the profits of Big Pharma.

The current pandemic expands the argument: capitalist globalization now appears to be biologically unsustainable in the absence of a truly international public health infrastructure. But such an infrastructure will never exist until peoples’ movements break the power of Big Pharma and for-profit healthcare.