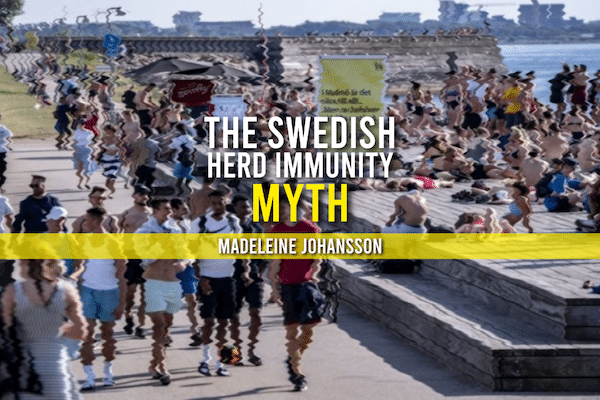 North and South, Ireland is now in a second lockdown and many people are frustrated with the government’s lack of action to improve testing, tracking and hospital capacity. According to Micheál Martin, the Irish government’s response to Covid is neither that of herd immunity nor a Zero Covid strategy. Instead the government intends to pursue a roller-coaster plan of lockdown-reopening-lockdown.

Some have argued that we should be looking to the approach adopted in Sweden. But what does this approach actually mean, is it herd immunity or is it ‘living with Covid’?

The Swedish public health authority has consistently denied that they are pursuing a herd immunity strategy. A herd immunity response would be to do nothing and let the virus rip through the population, rapidly causing health services to be overwhelmed and large numbers of people to die.

The supposed logic is that there would be enough immunity in the population to basically stop the disease from spreading. However, with Covid it is highly likely that immunity is not long-term but rather a short period of between 3-6 months. We know already that people have become sick with Covid more than once. One example was a 53-year-old woman in Sweden who got sick in May and then again in August, with the tests showing that it was two separate infections of COVID-19.

In Sweden, the main aim of the public health authority has been to flatten the curve of the disease so as to prevent the health system becoming overwhelmed. In order to do this a number of restrictions have been in place since March.

There has been a ban on large gatherings (both indoors and outdoors), social distancing guidelines and limitations of the movement of people. Everyone who can work from home has been asked to do so until January 2021, which will likely be extended. For a period in April/May people were not allowed to travel between different counties.

Currently there is a ban on any gathering of more than 50 people indoors. New local restrictions have recently been introduced in a number of counties where people are asked not to socialise outside of their household or to use public transport. People are also urged not to go shopping, unless it is for essential goods.

The lack of stricter restrictions during the initial outbreak in spring led to enormous community spread of COVID-19 and one of the highest death-rates per population in the world. One factor in this was the familiar tale of spread in nursing homes in the early stages.

Because the sector has been privatised there were issues of lack of PPE, workers on low pay going to work despite having symptoms and agency staff working in multiple locations. The rate of spread in Sweden should be compared to the other Scandinavian countries which introduced stronger measures.

See below for a comparison between Sweden and Norway where Sweden is the red line, and Norway the dotted grey line.

In late summer it seemed as though Sweden was bucking the trend when infection rates surged across Europe but remained low in Sweden. This led some to call for a Swedish “living with Covid” approach being adopted here. However, Covid is now rising again in Sweden with more or less exponential growth in many areas of the country.

The first chart shows the number of hospitalisations from COVID-19 which are rising again. 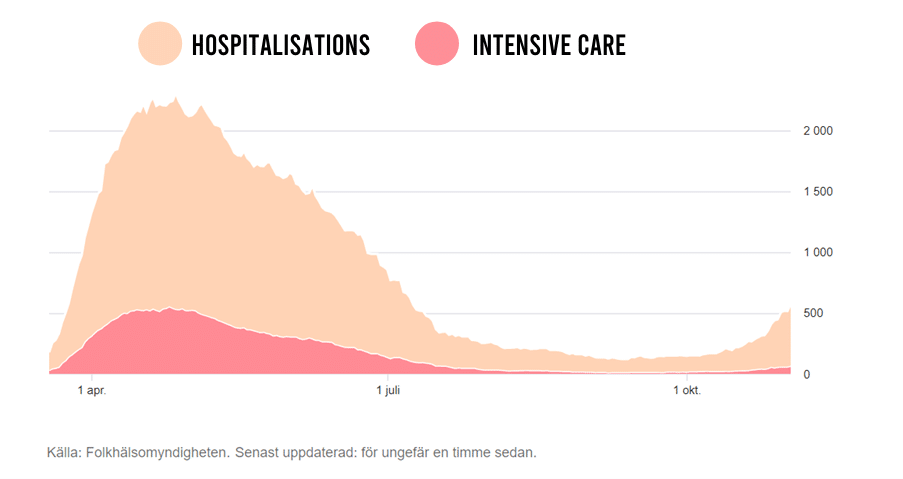 The second chart shows confirmed cases in Sweden. Note that widespread testing only began at the end of May so there is a large number of cases not confirmed in March/April. 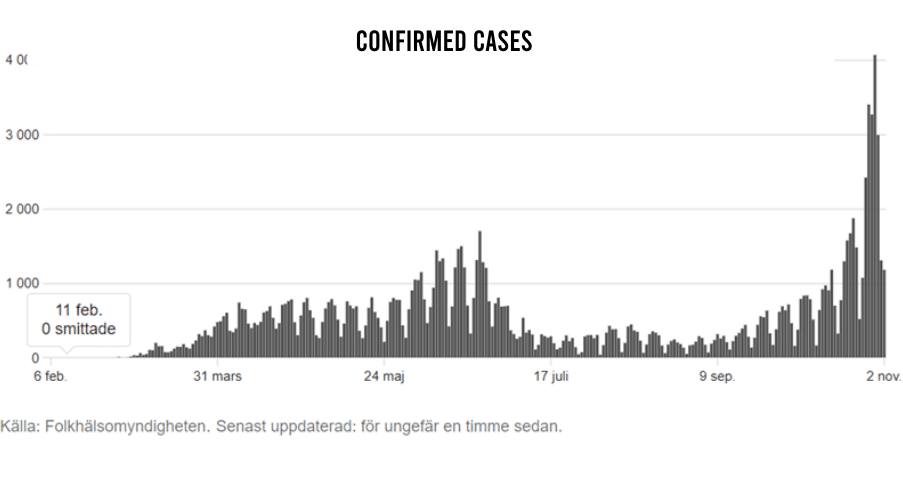 What explains the reduction in spread during the summer period?

Firstly, all schools were off. Secondary- and third-level education never returned since they went online in March but primary schools, which had stayed opened, took their usual summer break in June. All education, including third-level, returned to on-site activities in mid- to late August.

Secondly, many workers were on holidays. In Sweden, many workplaces close fully for a number of weeks in the summer, generally in July. All workers are entitled to 4 weeks of paid holidays so the spread of infection would have slowed considerably in workplace settings during this period.

Thirdly, the weather allowed people to socialise outdoors which is significantly safer than indoors. Spending more time outdoors also allowed for better social distancing. More people would walk or cycle during the summer months rather than using public transport.

There may be other reasons for the slowing down of infections during the summer months, such as some level of immunity in the population (this is highly questionable), or that the warm temperatures are less favourable to the virus.

But it’s clear that people’s behaviour during the summer months, and not some level of virus resistance among the population, had a significant impact on the spread.

We should reject those on the Right who were opportunistically using Sweden as an excuse to fully reopen the economy, sacrificing people’s health for the sake of private profit.

Scientists are now generally in agreement that it will take some time before we can get back to “normal activities” and that even when there is a vaccine available we will be living with certain restrictions such as social distancing for some period. But there is an alternative to the rollercoaster ‘living with Covid’ strategy adopted by the Irish government.

New Zealand has shown that a Zero Covid strategy is possible, and desirable. With a 32-county Zero Covid plan Ireland could return to normal activities quicker, which would have a hugely positive impact on people’s lives and health, both physical and mental. We should take our lead from the likes of New Zealand–not Sweden and its myth of herd immunity.