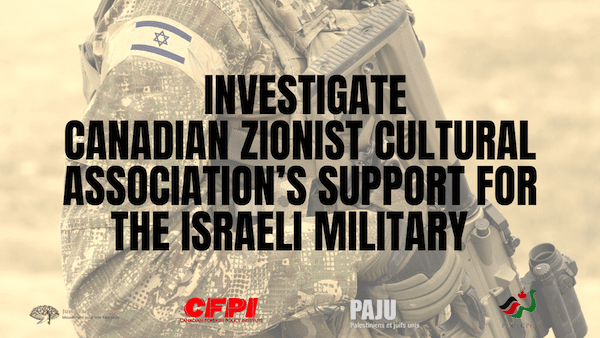 The Canadian Zionist Cultural Association (CZCA) was caught supporting a foreign military in violation of charity law. But it’s unclear if the Canada Revenue Agency (CRA) will apply its rules to the Israel focused registered charity.

In the summer Palestinian-Canadian refugee Khaled Mouammar and Rabbi David Mivasair submitted a formal legal complaint to the CRA concerning the charitable status of CZCA.

An Addendum to the complaint was submitted this week based on a decade of CZCA filings to the CRA obtained through an Access to Information request. The documents uncovered by lawyer Shane Martinez show that CZCA spent hundreds of thousands of dollars on scholarships for members of the Duvdevan, a commando unit that often disguisethemselves as Palestinians while enforcing Israel’s rule in the West Bank. They also financed initiatives with the US-based Friends of the IDF, the Israeli Defense Ministry’s Department for Discharged Soldiers as well as scholarships for those with “military service as a combat or combat-support soldier.”

As was revealed in the July complaint, CZCA allocated over $1.7 million in 2019 to YAHAD whose stated “aim is raising funds for IDF soldiers.” In fact, the Israel Defense Forces website explicitly named CZCA as an organization “authorized to raise donations for the IDF”. But, CRA rules state that “supporting the armed forces of another country is not” charitable activity.

Prior to submitting the complaint to the CRA in the summer activists reached out to journalists for an exclusive. When Global News reporter Stewart Bell began asking CZCA questions about its ties to the IDF, the Israeli military quickly removed that group from a list of six international organizations supporting it. Other bits of information about CZCA’s ties to the IDF also disappeared.

Efforts to scrub incriminating evidence from the web reflect CZCA’s understanding that its activities violate CRA rules. It also suggests the Toronto-based group has close ties to the IDF. One needs to have a good line of communication to a large bureaucracy like the IDF for them to promptly remove something from their web site.

CZCA’s bid to scrub incriminating evidence from the web strengthens the case against its charitable status. It should have also made the CRA complaint a more compelling story for Global News. It didn’t.

Bell said he noticed the IDF removed CZCA’s name from its site and that he had it screenshotted (as do the complainants). But, Bell failed to cover the story.

Did Bell decide not to move forward? Or did an editor intervene? Is it surprising that a pro-Zionist media outlet would hesitate to report on illegal fundraising for the Israeli military? Few Canadians would defend CZCA’s actions and corporate media attention on the complaint would likely compel the CRA to revoke their charitable status.

But it’s not only CZCA’s funding of the IDF that deserves scrutiny. The charity raised over $3 million in 2019 yet it doesn’t have a functioning website.

CZCA appears to be little more than a conduit for funds to the Association for the Soldiers of Israel – Canada, which isn’t a registered charity. A 2011 financial statement obtained through Martinez’ Access to Information request notes that CZCA “has related party transactions with [REDACTED] which is jointly controlled under the same management.” While the name is redacted, it is almost certainly referring to ASI-Canada, which shares an office, phone number and staff with CZCA. Acting as a financial conduit for ASI-Canada is by itself grounds for the CRA to revoke CZCA’s charitable status.

Many of the 200+ Canadian-based Israel-focused charities operate in an opaque manner. The NGO that rates Canadian charities on their transparency and efficiency in spending, Charity Intelligence, gave the Jewish National Fund of Canada a zero for financial transparency. In a 2019 CBC interview Charity Intelligence’s Kate Bahen called the JNF “an utter black box” in breaking down its spending. The Lone Soldier Center in Memory of Michael Levin, which supports non-Israelis who join the IDF “before, during, and after their service”, offers donors tax credits through Canada Charity Partners. But, that group lists a residence in Montréal’s Cote St Luc neighborhood as its office.

The reason Bell was approached for an exclusive on the legal complaint regarding CZCA’s charitable status was that he wrote a 2019 story about Beth Oloth Charitable Organization loosing its charitable status. With no website, an address listed in a home and only two active board members, Beth Oloth’s annual fundraising grew from thousands of dollars to $61 million between 2011 and 2017. In addition to acting as a conduit for donations, the CRA also revoked Beth Oloth’s charitable status for “increasing the efficiency and effectiveness of the Israeli armed forces” and funding projects in the occupied West Bank.

In the past 25 years a half dozen Israel-focused charities have lost their charitable status because of their poor financial transparency as well as support for West Bank settlements and the IDF.

Palestine Solidarity activists should be investigating all the Israel-focused charities to see if they support the IDF, explicitly racist organizations or West Bank settlements, all of which contravene CRA rules. It is also important to look at these groups’ financial practices.