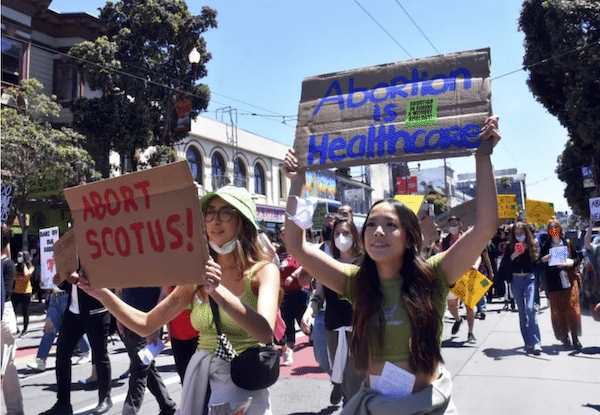 When you have touched a woman you have struck a rock, says a South African proverb. It continues, you have dislodged a boulder, you will be crushed. The U.S. Supreme Court justices who penned the recently leaked draft majority opinion abolishing voluntary legal pregnancy termination, should take heed.

Although the current debate centers on the issue of the women’s right to make decisions over their own bodies in fact much more is at the root. Today’s political flashpoint holds within it the urgent need to overturn patriarchal gender norms, class oppression and the capitalist economic system that perpetuate them. The fight is really for life for the majority, not just for the few.

This is not political jargon. The combat between the past and the future can be seen in real time when Cuba’s proposed Families Code and 2022 National Program for the Advancement of Women is compared with the hateful onslaught faced by women in the United States where the Equal Rights Amendment is still blocked.

In the United States, rights that were thought to have been won, at least in part, are now being slashed, eroded or reversed like the right to legal, safe abortion, or like universal voting rights. It must be noted that the U.S. is still the only industrialized country without a national health plan, so payment for medical procedures even where legal may not be covered by private insurance and require out of pocket payment. A poll published by CNBC.com reported that “66% of Americans fear they won’t be able to afford health care” in 2021 (www.cnbc.com).

On the other hand, no Cuban need fear they won’t be able to afford health care in any year. Despite the undeniable fact that the U.S. economic, commercial, financial and media war against revolutionary socialist Cuba hurts every aspect of daily Cuban life, all health care from organ transplants to abortion is the right of every Cuban who needs it. Not Obama Care, not Medicare for All–free, universal, community-based preventive health care.

Revolutionary Cuba leaves no stone unturned to provide these rights even hampered by the laser-focused intensified U.S. blockade. Somehow, through working together with solidarity, they do it, witness the herculean COVID-19 vaccine development, now expanding to protect the six-month to two year age group.

The right to health care and debate about abortion were settled in Cuba long before the recent  green bandana advances in Argentina, Colombia and Chile. Nonetheless, the Cuban people, too, are in the midst of debating rights–but not the rights for capitalist and landlords to exploit and steal or Big Pharma extortion for medicines.  The groundbreaking 1975 Family Code that codified gender equality in the home and in society is being updated, modernized, and strengthened with more equality, and inclusion, more protection, not less. Significantly even the title has been changed from Family Code to Families Code.

As presented by Federation of Cuban Women leader Teresa Amarelle Boué, Secretary General of the Federation of Cuban Women, at the March 2022 U.S.-Cuba Normalization Conference in New York City, the proposed revisions include the rights of children and seniors, as well as expanding benefits important to and sought by women workers such as in-workplace childcare. Even with resources severely stunted by the U.S. economic warfare, the proposes to boost income 50% for working women with three or more children under 18. Six thousand one hundred and eleven of these women and their children already received a new home free of charge fully resolving their housing needs. Even  more could be done without the U.S. blockade, she said. Community laundries are a new win-win proposal that provides new jobs while alleviating some household labor.

Contrast this with the U.S. where a “right to life” banner is cynically used to restrict women’s reproductive autonomy. In the U.S., right to life is purported to begin at conception, but stops before birth, sending Black maternity and infant death rates to scandalous heights in the richest country on the globe. Pre Pandemic more than 14 percent of children under 18 years of age, ten million plus, lived in poverty. Students graduate from university with unpayable student loans. Tickets to concerts and sporting events are out of reach for most. The right to health care, education, housing, sports and culture in a dignified life with the possibility of developing each human’s potential are all constitutionally guaranteed in Cuba.

Gender reassignment has notably been free in Cuba as part of medical care. Now free fertility assistance including surrogacy under certain conditions is included in the proposed Families Code, something unthinkably unaffordable to many in the U.S. who are unable to have children.

The Families Code provides legal rights for the various family formations that actually exist in Cuba today–officially married, or committed relationships without formality, same-sex relationships, grandparents or other close relatives raising children and more. Rights are expanded, not restricted so each family choice and need is respected. Amarelle explained the improvements this way:

“This is a code of opportunities and alternatives, of adding and multiplying, that recognizes and guarantees rights for those who didn’t have them. In no way does it affect or limit the rights already recognized for others.

“It does not establish molds nor does it require anyone to choose a family model that is not the one desired by each family.

“It is a broad and comprehensive code, revolutionary and modern.” (transcript of simultaneous translation by Martin Koppel, youtu.be)

The rights of children are expanded. The term “patria potestar” or parental authority was replaced with parental responsibility meaning physically and psychologically capable to guarantee and protect the rights, well-being and the happiness of the daughters and sons, provide participation, to listen to them, protect  them, bring them love, foster their growth and independence in an atmosphere of affection.

The discussions are not pro-forma to check off some abstract requirement, but take into consideration the comments, additions, suggestions and proposals gathered through multiple opportunities in 78,000 assemblies. As of the March conference, the version under discussion is the twenty-fourth draft. After approval by the National Assembly the final product of the consultations will then be voted on by the people in a national referendum, where as a result of the consultation processes, voters actually understand what they are voting on.

Equality and development of the potential of each human being is the secret weapon of socialist Cuba. The current U.S. efforts to push women back into some past family form conflicts with development of technology and our globalized world.

This equality was fundamental in the revolutionary process itself, recognized and promoted by the historic leader of the 1959 Cuban revolution, Fidel Castro Ruz. Women clandestine leaders like Celia Sanchez, Heidi Santamaria, Melba Hernandez and Vilma Espin also joined Fidel and the July 26 Movement in the Sierra Maestra.

Fidel also supported the formation of a battalion of women combatants, the Marianas, named after Mariana Grajales, mother of five sons including Antonio Maceo who fought and died for an end to slavery and Cuban independence from Spain. Weapons were scarce, but Fidel prioritized arming the Marianas who were regarded as the best fighters. After the victory over the U.S. backed Batista dictatorship Fidel and Vilma Espin founded the Federation of Cuban Women to erase the legacy of colonialism through education and job opportunities. Traditions chains were severed when thousands of young women joined Cuba’s historic Literacy Campaign (www.maestrathefilm.org) teaching the country to read and write in a year. The success of this process is evident today where women scientists and technicians are integral leaders in the development and production of Cuba’s five covid-19 vaccines. Statistics presented by the FMC delegation to the Commission on the Status of Women (CSW66):

Women: 67.4% of workers in education, more than 70% of judges and attorneys general, 62% of doctors and 64.2% of those working in international collaboration in countries around the world. Participation in decision-making is increasing. As of the end of 2021, women held 51.6% of State and Government positions including 52.3% of the State Council, 52.7% of Municipal People’s Power Assemblies, 53.22% of parliamentary representatives, 54.35% of the Municipal Assembly presidents and vice-presidents.

So what are we fighting for? The Supreme Court has forced the question. Let’s answer it. Cuba’s example represents our future.