The world scoffed in 1988 when it discovered that Nancy and Ronald Reagan consulted an astrologer. But the world was wrong; Ronnie and Mommie needed all the help they could get. Their only mistake was in relying on the tacky, low-class zodiac of the masses. I have therefore upgraded Western astrology, in keeping with the exalted needs of the hedonistically rich and irresponsibly powerful. A few examples ring in the New Year.

Born under the sign of the Spatula, you have an innate smoothness and flexibility that encourages others to use you as a major tool, especially on Teflon-coated surfaces. You are friendly and outgoing, and enjoy making fun of people who are about to be executed.

Tapped for success early in life, you are loyal to those who have helped you, overlooking their personal peccadilloes and occupational blunders that lead to the occasional terrorist attack. Although you are slow to take action in a crisis — possibly because of your need to prove to school children that you are capable of reading at their elementary grade level — you are relentless, once given a battle plan. You never retreat, no matter how much worse you make things!

The New Year begins with relative calm, but by March, you could face some difficult moments, as Pluto backs out of the House of Disney to spend several years in your Doghouse. 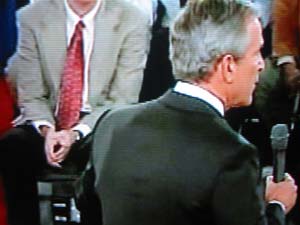 Criticism comes now from those close to home, but your Moon in Hyperbole allows you to laugh at death and disaster — reminding us that more sociopaths are born under Spatula than any other sign. This is definitely a year to watch your back — especially during public appearances, when those unseemly electronic bulges in your jacket could hint that your phraseology depends a little too much on Karl Rove and Radio Shack.

Other Spatulans of note include Howdy Doody, Lynndie England, Caligula, and the Ebola Virus. You are compatible with the Cheese Grater and the Frigidaire; your opposite is Noam Chomsky. Gem: gravel.

Happy New Year, Cheese Graterian! Commonplace in appearance, yet painful when applied to soft tissues, you Cheese Graters are the empire builders of the zodiac! Because your element is Oil, your actions may at times appear a bit crude, resulting in harmful, gaseous emissions. Nevertheless, with your intelligence and capacity for hard work, you are destined to succeed beyond your wildest dreams — provided you can transcend your growing reputation as “War Criminal.”

Never one to play by the “rules,” you are, however, extremely thoughtful and enjoy helping people, especially those with whom you share lucrative business contracts. Concerning the home and hearth, you are a devoted spouse and proud of your family, although you prefer to keep your lesbian daughter and her girlfriend under wraps, to avoid embarrassment.

You are surprisingly broad-minded, however, in matters of international affairs, opening new vistas in the field of human and legal rights deprivation. Always thinking of others, you go out of your way to lobby for “cruel, inhuman and degrading” treatment of prisoners, as you gain world renown for proudly upholding the “vice” in “Vice President.”

For the next 12 months, Jupiter forms a T-square with the capitalist planet, Halliburton, and the anti-capitalist planet, Marx. You may, therefore, need to step out from behind the scenes, where you are most comfortable, to face thorny issues in a public way. More and more people are talking, Cheese Grater — about YOU! Are you, in fact, as former CIA director Stansfield Turner alleged, the “vice president for torture” — or do you simply enjoy inflicting physical pain on Muslim captives in a privatized, civilian capacity?

Your fellow Cheese Graters include: Joan Crawford, Genghis Kahn, and Dracula. Compatible with the Spatula and the Meat Locker, your opposite is Mohandas Gandhi. Gem: Depleted Uranium.

REVEREND PAT ROBERTSON — THE DRANO CAN

Humble, yet highly noxious, you are at home under the sink or simply hanging out around raw sewage. Roaches, rats, and other satanic creatures are comfortable in your presence, as you, with your ominous predictions of hellfire and apocalypse, remind them of the kind of Earth that they, as The Meek, are likely to inherit.

This year promises big changes for those born under the powerful sign of Drano. Things have been a bit dull for you lately, but with the seductive planet Venus moving into your House of Ill-Repute, your love life could finally take off! Someone wonderful may enter your life this year — make that several someones — who could turn your world upside down!

Charismatic by nature, you have always attracted people from America’s corn-fed heartland. This year, however, some of their menfolk attract you, so get your mind out of the sewer and head for the barn, where you’re sure to engage in lots of corn-fed, corn-holing fun! Yee-haw!

Anything could happen, even — wedding bells? Several of your planets align this year in what is called a “Grand Cross.” This signifies that Jesus will return to earth sometime around late November in a fearsome cloud of fire and blood, causing you to rend your garment and rip off your eyelids, as you, true to form, expect the worst. However, in a redemptive gesture so like Jesus, you will be given the Divine Authority to perform gay marriages, plus two free tickets to Brokeback Mountain! Accept these gifts, and learn the meaning of true Salvation.

Drano Cans of history include: Rasputin, Elmer Gantry, and Beelzebub. Your opposite is God. Gem: Brimstone.